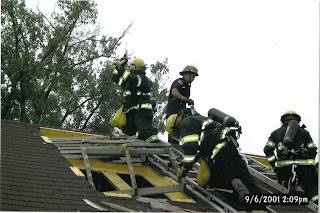 Sometimes life is brutal, and we are beaten...badly.

Back when I was at the training tower for the Fire Dept., we had to climb onto a structure built specifically to teach us how to chop through a roof. We stood on roof ladders and chopped (with dull-bladed axes) through wooden pallets.

I still remember swinging with all my might at a rotted-looking wooden pallet. It literally looked as though I could STEP on the center of it and break the wood...yet my blade would not cut it. So I swung and swung again, my axe constantly bounding back at me, the wood barely even marked.

Finally, a friend of mine, fellow firefighter cadet B., stopped what he was doing and explained that it was better to hit near the frame, and he demonstrated on his own pallet. He even showed me the recoil in the center, explaining that.it wouldn't break in there because there was too much rebound; it was too flexible and absorbed the impact. FF. B.  said that I was hitting with enough power that the thing should be turning to tootpicks...but wasn't because I was striking the wrong point.

I literally stood up there and ARGUED with him, even as I watched him decimate another pallet. For you see...B. was a big muscle-laden guy. His "power swings" were atomic in comparison to my swats. I DID try to hit a few points, with his coaching, but the wood still wouldn't break.

And there was a certain amount of fear; the pallets were placed over a window-shaped grid, and one wrong step might mean falling through into the fresh pile of wooden spikes below, the pallets that had built up there throughout the day. (This was therefore indeed true-to-life on-the-job-training.)  Thus, I could break the rungs closest to me, but stepping off the ladder and swinging outward, where the weight and the momentum might throw me off-balance and into the pit below...well, that was terrifying to me.

Thus, I have to admit, my fear was a factor. The old fear, (falling)  rearing its head. I ended up returning to my rebounding swings, convinced the wood would break...because as anyone could see, it was weak in the center.

In the end, I failed not because the wood refused to break; but because I refused to break. It was my own obstinance that was the direct cause of my failure. Finally, I was too exhausted to continue, I was beginning to get dizzy in the late summer heat, and my frustrated swings, even in the correct position, lacked the power to do much other than smash a random fly, if even that. As it was, I am certain some of my swings wouldn't even have taken the life of the tiniest fly.

The Captain finally ordered me off of the roof, directing me to get water, and asked my friend, B., to finish off my pallet. My descent of shame was barely noticed by my fellow cadets, but it was one of my first failures at the Tower, and added immensely to the doubt that had taken root in me; that I wouldn't make it through training.

As it was, I didn't finish.. I was injured a week later, I graduated with my class on light duty status, and in the process of rehabilitation, I was let go...with references. But the lessons from the Tower still guide me as they reveal both my own strengths and weaknesses...both of which were ultimately part of my journey to God. 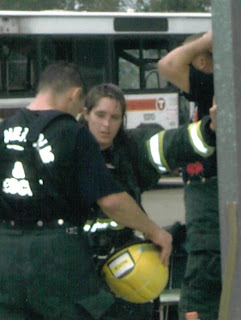 I am reminded that no matter how futile seems the task in front of us, often it's not the task itself that has any meaning...it is in the lessons inherent in the completion of our task.


Even as I remember my descent of shame and exhaustion, I am grateful for those lessons and wouldn't change that history even if I could.
So often we fight against God as He asks us to accept our weaknesses, not relying on our own strength. We are so prideful so as to reject even the most logical of assistance, wanting to go at things in our own way, CERTAIN that our abilities are sufficient. Yet they are not, and so we find ourselves flailing in vain, and it is only by God's grace that the axe-head doesn't fly off the handle and give us what we deserve for our obstinance.

All we need is a little humility...and that opens the doors to success greater than anything we could ever envision. Because the success is not ours, but Our Lord's.

As from the Gospel of today (Luke 21:1-4) ...do not fear to give EVERYTHING, for it's not in what we have that gives us glory; it is what we are willing to offer, in what we are willing to suffer, that changes us and opens us up to what GOD has planned. All we can truly offer is from our own poverty, our own weakness, and there, God is glorified.
Posted by Adoro at Monday, November 24, 2008