In class, as we study Isaiah and Jeremiah, in reading the prophecies in historical context, it's impossible to ignore the lessons for today.

We all know the old adage: Those who ignore history are doomed to repeat it. There are variations, but that's the basic line, and the meaning never changes. Stephen King even has his own version from one of his books: "Those who do not learn from history are bound to be beat up by it again."

And it's true. In Christian Anthropology, we study the nature of man, and in Spiritual Theology, we study the masters, from the pagan philosophers to the great Catholic Saints and Doctors. In all of these subjects, we can't help but mesh them together and see the tapestry that has been woven before us. We have not learned from history; we are repeating it.

We are, in artistic terms, a Diego Rivera melting into a Salvador Dali. 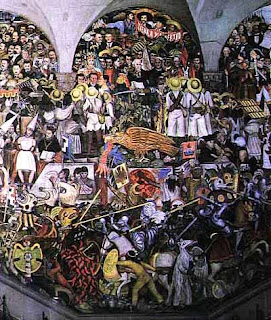 Biblically, we can substitute "America" in place of "Israel" or "Jerusalem" and have a pretty good idea as to what's coming next. We can take an objective look at the immorality of our culture, the secularization of our country, and all the people crying "Peace, peace" where there is no peace. The American false prophets (Obama, Oprah, etc.) are advocating all sorts of social change, even as those they claim help are the most victimized by their ideologies.
In the siege of Jerusalem, the captives were forced to eat their own dead children, among other horrors. What's so much worse about America is that not only does our new leader advocate abortion, but the slaughter of children born alive in spite of the attempt on their lives, and we're using embryos....THOSE ARE CHILDREN....in vaccines and to study various cures. How is that better than the cannibalism of Jerusalem? It's worse because it's been CHOSEN and ADVOCATED!

Let me make this comparison again:

In the siege of Jerusalem, the people were forced to eat their dead children. They had a water source, but were cut off from food for, what...three years? How long was it? Long enough for them to resort to cannibalism out of desperation. Those who thirst without respite will die. Those who hunger...get creative. In their desperate creativity, they ate their own children.

Can you imagine anything more horrible?

America is not under siege. We have abundant food and water. We are a wealthy country, in spite of our huge national debt. The milk and honey are flowing, wine is being poured out copiously, and there is much rejoicing. 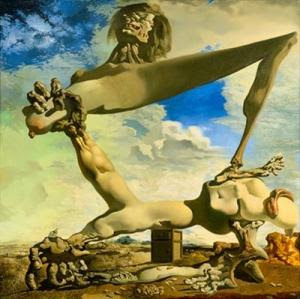 We are under no duress. Yet the abortuaries are doing brisk business in in-the-womb slaughters these days, and our new President-elect has voted THREE TIMES against the Infant Born Alive act, which would require medical treatment for babies born alive in spite of the intention of the abortionists and the mothers to kill them in utero.

You say that no, we're not eating our children. Maybe not as the inhabitants of Jerusalem did...but what we're doing is much worse.

Remember....they were under duress and seeking survival. Doing the abominable just to try to live. They were not in their right minds.

We are...in theory. We have more than we need.

But we ARE eating our children. We ARE cannibals.

In our culture, human embryos are being used in vaccines, in research, in ways that benefit us in expensive ways. Not only are we eating our children...we are paying for the privilege.
This is the stuff of sci-fi horror genres. This is the stuff born out of the depths of Hell. And as a country, we're voting it in and choosing it.

Human nature doesn't change. We are the same now as the people in the fertile crescent, B.C.

The ONLY thing that has changed is our ability to harness science to our own moral destruction.

Oh my! This is excellent ... but eerie in a coincidence, last week or two I wrote about our societies growing cannibalistic nature. You have just added a thought to my list of very sad examples. Have you read War of the Jews?