You have GOT to be KIDDING me! Anathema?


I've been ordered by the SSLI to post the following image on my blog, to "warn" people of the heretical content, in order to avoid leading others astray: 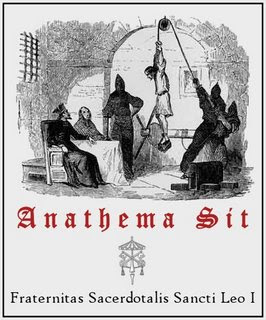 Effective immediately, all individuals who have been excommunicated or who have had their interweblog added to the Index Prohibitum are REQUIRED to display the above placard on any and all of their interweb publications. The notice label is designed to warn all who happen upon such interweb locations that extreme heresy and apostasy lie within. Such measures are absolutely necessary so as to ensure the spiritual safety of all those innocent and impressionable souls who wander about the interweb. ANY HERETIC REFUSING TO CORRECTLY EMPLOY THE MONIKER SHALL BE IMMEDIATELY REPORTED TO THE FIRST KNIGHT SUPREME OF THE HOLY KNIGHTS OF THE TRUELY TRUE CHURCH FOR PUNISHMENT

Let's look at this logically; do they seriously think that anyone who disagrees with them will cave in to their made-up "AUTHORITY" and fall all over themselves to warn people that their faithfulness to the ACTUAL Catholic Church is "heretical" in the eyes of SSLI? Riiiiiight.

Here's my response to them:

I'm completely unrepentant. You have NO AUTHORITY.

I may need to go to Confession for the above response, but IT'S SO WORTH IT!

But I have to ask...is it a sin to mouth off to a schismatic sect with invalid "ordinations"? If so, I'll humbly go confess my absolute unrepentance to a TRUE priest of the Roman Catholic Church, and my mouthiness, and then I'll write a letter to the Pope pledging my undying gratitude to God and my fidelity to the truth, faithful, One, Holy, Catholic and Apostolic Church, which does NOT involve the SSLI.

I'm going to do a lot of time in Purgatory for this post, aren't I?

NOTE: This is a PARODY post in response to a Parody blog; SSLI is a parody and does not exist in the real world. Do not be alarmed.
Posted by Adoro at Saturday, July 07, 2007

You could have just said, "nah, nah, I'm not gonna and you can't make me!"

Adoro--I'm so sorry about your greyhound. I'll say a prayer for strength all round.

But as for this badly timed muck--
are you SURE this website is for real?

Adoro: You should not have said: "bite me". They might actually try to do it!

Have no fear...I'm not falling for anything...I'm just trying to get others in on the joke.

And YOU, a satirist, thinking I think this is for REAL??????

You must be doing something right, you've been banned on both sides of the aisle now!

(and if you need that priest to hear your confession, ummm.....)

Fr. Kyle ~ Are you saying it IS a sin to mouth off to these people? OK. I'm still unrepentant...will need some spiritual direction with regard to that. LOL

They actually excommunicated me some time ago. Now they just want me to post this...image to "warn" others.

Excommunicated, banned from the picnic and now this. When will it end??? I may have to change out of my wool socks, combat boots, and ankle length skirt.

An enemy of an enemy is my friend.
Way to go! LOL.

Adoro, what happened to your July 8 post? I read part of it, thought it was good; was going to come back and finish reading, but guess what, it's gone.

melody ~ I took it down for an edit; it didn't quite convey clearly enough what I was trying to say, and I feared that someone would read into it thinking I am making an *actual* comparison, ie children to dogs. That's not what I want to convey, for that is not how I feel or what I believe. But people often go off on those kinds of tangents and it ends up completely destroying the purpose of the post and turning it into a weird debate about an issue that is not present. If I can't figure out how to avoid the problem I likely won't repost it. The last thing I want to do is offend someone who may have lost a child.

Adoro, I see what you mean. People do misinterpret these things sometimes. I was actually reading it as, God is present to us in all our grief and sorrows, no matter what the issue is.

If you are anathama I ain't got a prayer. glad it is a parody.

Oh, OK--sorry, I guess I didn't look at the blogs that clearly. Plus there are a few nuts out there, ya know.

Glad it's a parody. And you got a laugh!

Yeah, there are MANY nuts out there, at both extremes. The parodies are HILARIOUS! :-)

And if you only knew my involvement.....