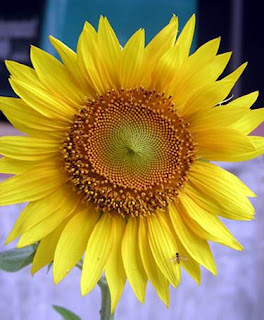 When we first moved to Minnesota, we were excited to see sunflowers blooming in our yard in July. I don't know why, but there was something about that long, powerful stalk and the huge disk with petals that helped me to feel at home. I had not grown up with these flowers, but something about their presence was comforting to me.

Overall, I do not really see myself as that much of a "flower-girl". I like flowers, but I've been a tomboy for so long that, in some ways, flowers just don't seem to define me (other than the dandelion or the violet, both seen as being "weeds"), yet as I've gotten older, their beauty keeps drawing me to them and more deeply, into God.

So when I bought my townhome, which has only eastern sun exposure, I planted a sunflower seed. It began to sprout that first year, but I needed that particular space to store some outdoor "furniture" so, being stuck in constant shadow, the little sprout died.

It's been a few years now, and this year I determined that although I don't have a green thumb, I should attempt to grow sunflowers again, partially for privacy for my ground-floor window and protection from the sun, and also, for a little bit of beauty in what "land" I have. So I went to the store and purchased a few varieties, but what clearly intereste me most was the Giant Sunflower; it has a long stalk, and when it blooms, it's huge. It has edible seeds, and basically, this flower is completely useful. And it grows in the wild, meaning even someone without a greeen thumb can grow it.

So I planted a few seeds, and our spring, in the beginning, was wet. I eagerly watched the little sprouts, and then, another, unexpected sprout appeared, right where I had planted the seed a few years ago.

This time, I have been careful not to cover the area with shade; I want to watch new life bloom before my eyes, and this little sprout, which at first resembled the weeds, caught my attention. I had been about to weed my "garden", and something told me to hold off. So I put the gardening gloves away, watered the clover and the mystery sprout, and hoped for the best.

It wasn't long before I recognized the sunflower stalk, and knew this was no ordinary "weed". This was the seed I planted years ago, finally given enough light and water to rise from the ground that had held it captive for so long.

My new sprouts also began, but I had planted them late in the season so hoped they would survive. Every day they were bigger, but I realized I'd planted them too close together. They were doing well...would one crowd the others out? Would they all die?

And then we were hit with a few days of intense heat, intense sun, and a period of intense dryness. We've been in a drought here in Minnesota, and sadly, I had to watch my little seedlings first fade, the wither, then die.

There was another sunflower stalk almost as large as my original one; I'm not sure where it came from, but there it was, and just as the seedlings died, that one did as well. I tried to save all of them. When I saw the little ones fading, I removed a couple of the weaker ones, and added some potting soil to the sandy, rocky ground. I added water for a few days...but they continued to decline. Then the heat sealed their fate, and they all died, even the brother to my healthy stalk. It withered, bent over, and in spite of my ministrations, it also died and became home to spiders. I quickly put an end to THAT!

But for a couple weeks now, I've been watching my original seed come to fruition; that stalk has grown daily, literally visible to the naked eye. I have watched the head form at the top, leaves actually closing at night, and the head drooping in the shade and then again with the evening, seeming to wilt. Yet upon the morn, upon the rising sun, the head of this flower has begun to lift, and each day, it is visibly larger. Each day the leaves grow bigger, each day, the stalk grows wider and more supportive.

Yesterday, I saw a glimpse of yellow petals, thinking that perhaps they would begin to open in a couple days. And then, in the late afternoon, we were hit with a storm. Along with a strong gust, the torrential rains fell, and all creation praised God for we needed this deluge so desperately! I watched my flower anxiously as it waved in the wind, blown to and fro in the gusts, rising in between, flexible enough to withstand and still hold its ground.

This morning, I opened the drape and was shocked to see what looked like an open hand, waiting to greet the sun just hinting at its coming. When I let Fire out to walk, we inspected the flower and I saw the green center and open petals. I've noticed that it really does follow the sun...drooping low but hopefully open in the morning, wide open to receive the light and heat of the sun as long as the direct rays are available, and remaining open to receive even reflected rays once the stalk and flower itself are cast again into the shadow under th eaves.

Tonight I began to be alarmed as the flower again began to droop, but was reminded that this flower literally follows the sun. Upon closer observation, I saw that it is already pollenating, and some of the pollen has fallen upon the leaves. My flower is growing quickly and will soon be in its full glory; and by its very existance, God is praised. 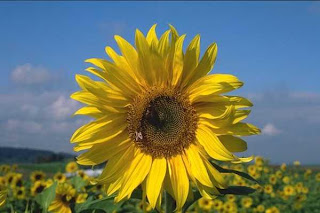 I am the woman without a green thumb, watching every day as this miracle of a flower, one that lived in the shadows for three years, has finally sprouted and has come to fruition. All I did was plant a seed, and wait. All I have done was take away the shadow that suppressed that original seed, and finally, God's creation has come to bloom almost at my very doorstep, and certainly before my livingroom window.

What metaphors might this simple flower, once considered to be only a weed, have in store for all of us?
Posted by Adoro at Monday, July 09, 2007

Hollyhocks have gi-normous blooms, too. They get really tall. They always make me think of Wizard of Oz. They only bloom every other year, but it you had a bunch and alternated when you planted them..it would work.

I grow some sunflowers on my property every year. Most are re-seeds (volunteers) from the year before. The birds love them!!

Help!!! my emails are being "denied access" and returned. Have I been excommunicated --- again!!! LOL

I am also horticulturally challenged. Every plant
I touch dies, although most die from utter lack of
attention, my ministrations also kill what's left
of whatever plants I own.

This is a truly beautiful, and profound thought. Thanks.

From my reading this morning: "The heavens declare the Glory of God, and the firmament shows his handiwork". Are these flowers not the jewels he chose to adorn his handiwork? And what beauty. As Jesus says, not even Solomon in all his glory, was arrayed as one of them.

At a retreat a few years ago we were shown photographs taken over the course of a day showing how the sunflowers turned their face to the sun, giving us an example of how we must continually turn our face towards God

It was very powerful

I'm not wild about sunflowers. They loom too much, either imposing themselves threateningly over me or, at very least, looking at me in condescension. They're just so full of themselves.

That's not strange, is it?

I bet that spider turned his face up to the sun too! LOL!

I love sunflowers. I have sucesfully killed dozens in my attempt to grow them in my yard.

Now, the next step is to consider, what is God trying to teach you in that Now, in the present moment you have this sunflower to consider?

What an amazing lectio of life this might be for you considering all you are going through.

Adoro, you are blessed and a blessing.

We had some of these big sunflowers a few years ago, planted by the former owners of our house. It was such fun to watch the blue jays hang upside down from them, trying to get the seeds.

I think I like sunflowers again. I, like other commenters, have killed some in a failed attempt or two to grow a few.

Sometimes it's not how green your thumb, but how great your persistence (for the likes of me, anyway). LOVE this post, Adoro, and LOVE where you go with it! As a fellow tomboy, I can tell you that the tomboy farmer in me is the one who gets the thrill from growing things; it feels like I'm doing something primal in raising things out of the soil, relying on nature and God and seeing the miracle of life unfolding. My garden gives me great comfort and great metaphors for my vocation as mother. And sunflowers are one of my favorites - I just planted some this year for the first time, and I've particularly enjoyed my daughter's response to them (they aren't blooming yet; I planted them very late) and marking their height.

Thanks, everyone, for your comments. The sunflower is still doing well, he just grew up so FAST! LOL!

Sarah...I have always had an interest in gardening, although realy no place to indulge it. And given my lack of success with most house plants, well...I didn't actively look for a garden to plant because I just don't want to be so responsible for that much death. :-)