Needed ~ The Intercession of St. Francis! 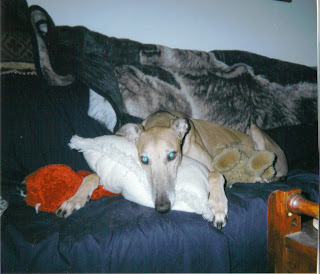 I just * knew * this would happen.

There's something wrong with my greyhound...he's limping. Initially I thought it was his toe, because last weekend he was seeming to favor his left rear paw. When I investigated further, and found a tender spot at his knee, he let me know with a loud bark and a long, low, growl, and a snap of his teeth in my general direction, while staring at me balefully.

There's no swelling, but I have been carefully checking every day....ther's heat in the area, and for now, I'm treating it as a sprain. He's going outside only to do his business, no regular walks until this clears up.

I've noticed it's worse in the morning, which is logical, but now it seems to be getting worse. Today he's barely putting weight on his left rear leg. All week, he's not even tried to climb onto the couch or the fouton I "gave" the dogs, just hanging out on his dogbed on the floor, or in his kennel.

I do NOT want to take him to the vet if I can avoid it...because of course they'll want to do X-Rays, which makes sense, but the cost of this is just not something I can afford right now. It's going on the plastic and since I just put a $500.00 brake job on my plastic, well, let's just say NOW is NOT the time to be building up debt or digging into my savings, which aren't, shall we say, "built to last" as it is.

If we must go, we must go. As a rule, I hold off if it seems to be a sprain only because of the simple fact that sprains clear up with simple treatment. This vet isn't one to dispense a lot of medications, and I can't give my greyhound aspirin, not even doggie aspirin. Greyhounds do not process meds like other dogs - what works for other breeds can go so far as to kill a grey. And, it could be arthritis or just a flareup of an old injury. He is an ex-racing dog, came to me after nearly a three year career.

So I'm praying to St. Francis for some help here. Last night was a cool night and I had the fan running. I noticed my hound was a little chilled this morning so I suspect he may just be working out some stiffness, but if it's really just a worsening condition, well...then at some point I will have to make the decision to take him to a pro.

I'm so completely unsurprised this is happening. When I discerned religious life, and worked to try to pay off my debt load, my dogs were both hit with amazing and strange (and some repetetive) illnesses requiring vet visits. I won't even TELL you how much I had to spend on them that year. The reality is that every time I am facing some major financial issue, the dogs get sick and the car breaks down or a necessary appliance in the house goes kuputz. Why should I be surprised that the dog broke down again?

And no, keeping the job isn't the answer...it's already been posted and my replacement is being primed.

Poor doggie! I don't suppose he would let you cold-pack it? That might help if there is any swelling or inflamation. Does he seem to have a fever? If not, you are probably right that it is something that will heal on its own. I'll pray for him.

I have been icing it as part of the treatment for a sprain, but it's in an area that's hard to affix anyting to, and if he happes to lay on it...fogeddabodit.

I'm no vet, but this may be arthritis rather than injury. Usually with injuries there's swelling....unless of course the appetite goes south, then its more likely infection. As long as the dog in eating, drinking, do the "business" it most likely in not serious and will pass with time without needing to pay a vet. I hope all goes well.

Since I just spent $1000.00 on my little guy and used to work for a vet your problem can be researched at this link http://www.southpaws.com/topics/cruciate.htm
I suggest until you have $$$ to see a vet you keep him as quiet as possible. NO running. Anti-inflamatory meds would be a big help.
I would be willing to donate to the cause and I'm sure others would be willing to help.
In the meantime, your doggie has been added to my "prayer bowl".

*praying for your dog.

Thanks, everyone, for your prayers for my boy!

On one hand, I do think it's arthritis....since I've had him, he's tweaked ALL of his legs now, but one, sometimes there has been swelling, sometimes not. And I never know what he did, so the appearance of his injury is always mysterious.

I have been keeping him very quiet. But that little bugger keeps trying to play with my Shepherd! I'm constantly intervening. And of course, because he wants to go on a * real * walk, not just out to do his business and back in, he balks, refuses to sniff for a spot, etc. Drove me crazy the other day when I was trying to get to work! He simply refused to go, and I KNOW he had to "go"!

adrienne ~ Thanks for the link. Now I'm terrified. Surgery is completely out of the question. I don't see how I'll ever have the money for that! Currently I'm just praying I don't have to give up my dogs. If this clears up, though, situation averted....for now.


He stays kenneled during the day, and where I used to let him stay out if I'm only gone for a couple hours, since the dogs play when I'm gone I now kennel him every time I leave. Poor little guy! Or big guy - he's a 70-someting pound dog! LOL

And isn't he cute?

Fire is cute. I'll pray for him and Tikaani since she probably senses something is off with her buddy.

Praying for YOU too!

Hey, solidarity, sister, I'm just about to pay $350 for a new muffler system on my car! Groan.

Step back from the situation. Then read the following quote from Adoro.

"Thanks for the link. Now I'm terrified."


Hey, I thought it was funny.

Adoro,
you're quite right, that troubles pile up to help us gain in perseverance when we seek greater closeness with God; He wants to be sure we think He is worth the effort!
I also am asking St. Francis of Assisi to pray for you and your dogs.

I was going to suggest what Adrienne said. Hopefully it is not that. I will say prayers for you and your puppy.

Gads that must break you r heart.

My dog Wishbone, (our son named him when he was in second grade)
also comes up limping occasionally. In a few days, he often is better. Prayers are definitely in order, as always.

You also need St. Rock, the patron saint fo dogs and dog lovers, and St. Hubert, the inventor of the St. Bernard (dog...).