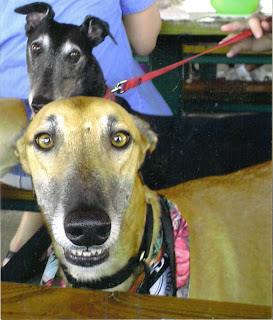 I am calling the vet today.

Last night, Fire would not go upstairs with us. It has become his habit of late, to pause, gather himself, which might involve a little uncertain pacing, and then carefully navigate the stairway. Until last night, though, he did not have a problem. In the morning he just hops down using his good leg for balance.

But last night was different. He didn't even try, but for putting a paw on the second step, then withdrawing it and whining plaintively. I brought his kennel blanket and a couple toys up to entice him, to no avail. I left him alone, letting him figure it out...nothing.

We had to go to sleep, and I ended up bringing my German Shepherd up with me, rather than letting her stay with Fire for company. Even though Fire did not want to come up the stairs, dogs will play and I feared if left 7 hours alone, they will find some playtime and make Fire's condition worse.

I heard him whine just a little and then there was silence for the rest of the night. This is the first time he has ever slept on a different level of the house. Ever since I trained him how to navigate stairs, he has never failed to either follow or even beat me up the stairs at bedtime. Last night, although he had the freedom to come up at any time, even though he must have been terribly lonely, he did not venture to attempt the trek.

This morning he heard me get up, right on schedule, and as I got prepared to walk the dogs, (in his case, just a quick walk in the yard) he stood crying, just so that I could start my Friday with a heaping dose of pitiful guilt.

He feels warm, indicating he likely has a feaver. He seems distressed, he's barely using his left hind leg, and he's not even standing at my elbow begging to be petted as he usually does this time of day. It is not possible for me to have a cup of coffee and not pet the greyhound; it's part of the morning routine. In fact, he's usually so persistent that I have to set the cup down and focus on him for awhile, and then finish what's in the cup. After wiping up the spilled coffee, of course.

So this morning I will go to work, I'll call the vet clinic when it opens, and see what they recommend. Because we've run all the diagnostic tests, I honestly hope I don't have to take him in again, but we all know that's not how it works. We'll be going in again, either today or tomorrow, because that feaver is indicative of something more than an irritated ligament.

Another first; he went and laid in his kennel in lieu of begging for attention, and when I went into the kitchen to get his Rimadyl and the medium (a marshmallow) I use to give this huge tablet to him, he didn't even try to get up for this wonderful treat. In fact, he seemed to take it from my hand when I brought it to him just because I'd gone to the trouble.

Any time a dog does not show inordinate interest in his favorite treat, something is wrong.


9:30 AM UPDATE: I called the vet this morning, by some miracle he is not off today; he is usually not working on Fridays. They sent me to his voice mail, I left a message about Fire's fever and inability to go upstairs, they called me back and tomorrow he is going to re-take the X-rays. We were going to wait a month. Guess two weeks to the day is necessary.
Posted by Adoro at Friday, July 20, 2007

Still praying for you and Fire, Adoro.

Sven and Earl, two good ole boys from around Anoka, are quietly sitting in a boat fishing, and chewing, and drinking, and spittin', when suddenly Sven says, "I think I'm gonna divorce my wife. She hasn't talked to me in over two months." Earl sits quietly, spits, sips his beer, and finally says, "You better think it over, Sven; women like that are hard to find."

uncle Jim ! Anoka is just down the highway from me! Dey got dem bouats up dere, ya know!

My uncle used to always tell me this joke:

One day Ole and da missus, Lena, were drivin' tru town and got stopped by the Sheriff. The sheriff walked up and said to Ole, he said, "Ole, d'ya know why I stopped ya?"

So the Sheriff, he said to Ole, "Ole, I stopped ya 'cause you was speedin."

"Yes ya were, Ole, I got you dere on my radar, you was going over the limit!"

"Well, Mr. Sheriff sir I'd like to see that der radar!"

Just then, Lena leaned over Ole and said to the Sheriff, she says, "Sheriff, you ought to know better den to argue with Ole when he's been drinkin'!"

we have a very close friend here who's been a teacher comrade with my wife. she's from them parts too. actually from one of the twin-city suburbs, but, through marriage, etc., and a husband who worked for 3m, she ended up here in indiana. they're now divorced and he's back in the twin cities. her parents were both public school teachers there and are now retired [very well, i might add], and have moved to a place up north near big rapids and aboout 50 miles south of international falls. they love it and regularly invite us up - we've not made it there yet, but someday ...
this lady here, she is constantly telling lena and ole jokes ... and she's got the accent down purty good ... she keeps listeners rolling on the floor with them stories.
they gotta be the biggest folk-heros of our generation ... if'n you're from them there northern parts, that is.