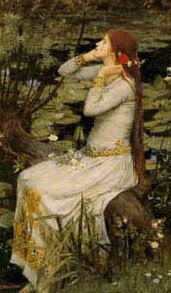 I had things to do tonight. I was either going to go to Mass and Confession, or out with the local Frassati Society, as for the first Wednesday in MONTHS, I haven't had an evening obligation.

I came home with the full intention of going out...but it just seemed wrong. Going to Mass didn't seem right, either, because for some reason, all I wanted was silence and to not have to interact with people.

One of the fruits of my Lent this year was the gift of silence. Because of my class and the need to concentrate, I had everything turned off. I was always like this in college...the sound of the radio, even softly played music, grates on my nerves and distracts me when I am trying to grasp something deep and meaningful. This year, I even put on one of my Gregorian Chant CD's and had to turn it off. As soothing as it is, the sound has no place when I'm trying to understand God.

Although since Easter there has been more "noise" in my house, it is significantly less than before the penitenial season, and I'm finding more and more that, in order to refresh myself, I NEED to have that absolute silence. I'm even finding myself switching it off in my car, choosing to just be quiet, even if my mind is full. It's easier to sort things out when we have fewer distractions.

Tonight, then, I discerned, was one of those nights; the craving for solitude and silence was overwhelming. I've actually been feeling very pensive all day, if excited and nervous and anxious about whether I will be able to move on in the interview process for the job I want.

But I've realized that it's time to just let God work, and he does this on his schedule, not ours. Ironically, I lost my watch this week. I can't find it ANYWHERE and that thing is normall fully fused to my wrist, stays close by while I sleep in case the power goes out, and it remains with me as I walk my dogs in the morning so I know whether I'm on schedule or can maybe take a longer walk. Especially now that it's light out, our morning walks are the best part of the day!

It's much easier to praise God for his creation when the sun is peeking over the horizon in glorious colors, than it is when trudging through ice in pitch blackness before dawn.

So I'm without a watch, and it's like a piece of control has been forcefully taken away from me, and I really feel adrift for not having the ability to know for certain what time it is if I am not near a clock.

I realize this is a blessing, but that knowledge doesn't make it any easier to bear.

It's been a rough week in general; I recieved some wonderful graces the other night as I prepared to go to sleep, and then the night hours proceeded with spiritual attacks all night long. My dreams were vivid but disturbing, although I could not recall them upon waking, there were dark presences in my room and so I prayed and prayed all night long, never knowing how I managed to get to sleep time and time again, only to be awakened once again with my heart in my throat and facing the nearly-visible presences that surrounded me.

Then there was spiritual dryness which always seems to follow a period of consolations, even if there is also a period of attack, and in the dryness my faith is tested in the usual way. "Why are you studying something that doesn't exist?"

And then I find my faith in doubt...and somehow it is restored.

I haven't been able to read at all tonight although I have tried. I haven't been able to take what I know and advance my paper any further. But I did just sit in the darkening comfort of my livingroom and contemplate God and acknowledge His presence. It occurred to me that whenever I want to seek God, I go to Adoration, and who doesn't love to sit in the very presence of Jesus? But sometimes He finds it important to make "house calls", and help us to understand that he is knocking, always knocking, and that we have to be willing to sit in silence and just let HIM be present with US. Sometimes he calls us to take action and come to him in his True Presence...sometimes, he knows that we need to remain in solitude, he places us there and asks if he can come in.

So tonight, I let Him in, and although there were no real "words" exchanged, I have a clearer sense of his presence, a clearer understanding of the actions of the Holy Spirit, and a sense of tranquility I have not had for a few weeks. This silence may have been the best prayer I've "said" in ages.

I encourage everyone to take an evening and just be silent, turn everything off, go about whatever activities you must, and when you can, just find a comfortable place and sit...and let the Lord come to visit you.
Posted by Adoro at Wednesday, May 09, 2007

what a wonderful night

I understand completely. I am glad you have found a place where you can be silent. Maybe you have a good friend, that you can be together with, and just be silent together, and enjoy the peace of each other's company. You can sit and read a book in each other's presence, and not need to talk. It is so, with God. When our hearts are at rest in him, we can have real silence, real peace, and real consolation.

I find it funny that you find it ironic that you lost your watch this week.

God does interesting things to get our attention even takes away things we are unnaturally attachted to, like watches.

"...sometimes He finds it important to make "house calls"'. I like that thought.
I'm like you, Adoro, I don't feel dressed without my watch. Except if I lost it, I would probably be over to Walmart buying a new one!

It was a wonderful night. I now regularly come home and just have everything off for awhile. It's nice.