Some time ago, I alluded to STILL being the Prodigal Daughter, and it seems I may still be there. I have not heard anything from my interview of last week, so I fear that I am out of the running and eliminated from further consideration. So be it...God has a plan and if this isn't my place, then I submit to His will.

But I cannot help but be frustrated by the bars of the prison that surrounds me.

I see my current position to be a culmination of the rebellion I began in earnest so long ago. Most teenagers rebel by simple disobedience (just like in the Garden of Eden!), most teenagers just go through a lot of angst and do typical teenage things. I was never like other kids. I was a good student, I worked hard, I kept my focus, and even when I ran away from home to find refuge from our chaotic home, I ran to a family I knew, and continued going to school and going to work. I was the responsible daughter...by appearance.

I was always an artist, I was always active in Church, I was the writer, the musician, the thinker, the scholar. Mom was so proud of me.

And then I threw it away, little by little, by degrees. I would have been a good teacher; I was told so by many. I had gifts I was encouraged to use and pursue. But I decided I was going to do something totally different; I was going to be a cop.

I found that such an endeavor meant (to me) the rejection of my natural gifts for they had no place in my new worldview. I had to overcome what seemed like weakness (and anything Mom liked was weakness), and adopt things that were "difficult." I was not a natural athlete as far as I knew, so I worked to overcome that...and succeeded much more easily than expected. I needed to develop a thick skin, to overcome my natural sensitivity. Slowly I took on the trait of cynacism, even wrote a story about it freshman year...I may post it one day. (It's fiction). It was actually the last bit of fiction I wrote for years.

Slowly, I shed the remnants of my true nature in order to take on a persona that did not fit me. I wandered through law enforcement jobs, through firefighting, and finally all that training and experience culminated in my current position in which I'm using much of it, but the position has morphed and all I'm dealing with is numbers and mathematical absolutes. My worst subject. I have been in a hell of my own making for the last 5 years.

Slowly, as I reverted, my original gifts have been brought to the forefront and I have begun taking them up again. I have asked for them to come back. I have been asking to be released from this prison.

I have found myself to be in a place in which I am now rejecting the education I am still trying to pay for, the experience I literally gave a piece of myself to obtain, the blood, sweat and tears...all of it, in favor of what I should never have left behind.

It is all so dusty, it is even foreign in some ways, but in a reminiscent way that is comforting. I have been coming before the Father, rehearsing and asking Him to take me back, release me from this prison, and restore me even as a servant because there I could at least have access to what I was first given, even if the full benefits are no longer there.

The Father has not answered yet, and perhaps it is because I am still rehearsing. While the true rebellion is over, I sense I have something else to do, something else to request, some better way to approach the Throne of Mercy. I am the Prodigal, and the Father is in sight, and He is welcoming me...but I haven't yet reached him. I am still missing a big piece of my own coversion, but I can't quite figure out what it is.

In my rebellion, I fell so far and squandered what little I had, and I still squander what has been given to me for the present. I have fallen, and I have lost my dignity, and I can't seem to really take it up again.

I am coming before God, begging forgiveness, asking that the dignity I so rejected be restored to me. I am asking that my punishment come to an end. I formally reject the rebellion I began and ask to start anew. 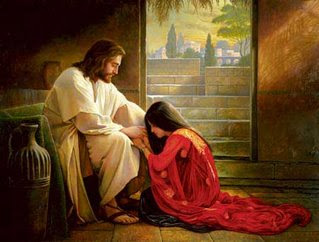 Please, God, give me another chance. Let me start over.

I can't do this anymore. I'm not fit to be called your daughter.

I am the Prodigal Daughter, and all I want is to find my way home.
Posted by Adoro at Thursday, May 10, 2007

May the Lord restore the years of the locust to you. May you eat not from the trough but nor even the scraps at the master's table but be seated in the place of honour, humbled but blessed. May peace that passes understanding be yours.

So, where can you apply your G-d given gifts and talents and affect the kids of today at the age you were when you were searching and rebelling? Seems a debt to be paid there.

Patience, people, for the L-rd is coming.

uncle jim ~ the position I applied for would actually pre-empt my rebellion, and even something that goes even deeper about which I will likely never discuss with anyone other than an SD. (Which I don't have, so it remains in silence).

One thing I've realized is that God gives us the opportunities to atone for everything, not just the years...and I'm atoneing for that now. But there's more.

Apparently my sentence is not complete - not for my rebellion.

I've been praying to Fr. Ciszek about this. If you haven't read his books, "With God in Russia" and "He Leadeth Me", well, DO!

I wouldn't have made it this far without him.

You are so very deeply loved. For every halting step you take towards him, like the prodigal son of scripture, remember the Father, who runs towards you while you were yet far off. His arms are open wide, and there are tears of joy in his eyes, and the sound of rich laughter, the sound of your beloved calling your name, the warmth of his voice as he runs to meet you. He loves you. You are his daughter, the jewel of his eye. As he embraces you, you are swept up in love, and you will forget everything else. You are loved. Don't forget it.

ultra ~stop it! You're making me cry!

I've still got you in my prayers, Adoro.

Generally when employers have an easy decision, the rejections come quickly.

I still have hope that you will get that 2nd interview.

Ray and Cathy, you are good friends. Thank you for your prayers.

I haven't given up on myself, not nearly, just hope for this particular job. But nothing is "mine", not this computer, not this house, not this blog. (As Cathy noted herself).

Still no word, not even a rejection letter.

God is helping me increase the virtue of patience, which is a virtue I really don't have.

I just wish I had a definitive answer.

You wrote:
"Slowly, I shed the remnants of my true nature in order to take on a persona that did not fit me. I wandered through law enforcement jobs, through firefighting, and finally all that training and experience culminated in my current position in which I'm using much of it, but the position has morphed and all I'm dealing with is numbers and mathematical absolutes. My worst subject. I have been in a hell of my own making for the last 5 years."

You just can't see the path, can you! (It's not a question.) Did you really read Walter Cizek? (That was a question.)

You are very much in my prayers.

I pray to him all the time. I am in prison...that's what I've realized. I'm in prison, but unlike him, I deserve to be in prison.

Were it not for him, I would have been fired long ago and things would be worse. Someday I will thank him profusely for his intercession.

Please keep praying for me. I so need a new beginning, and I have nowhere to go. And everything to lose...but God.

Another author, Slawomir Biela, in my sidebar. "God Alone Suffices." Remind me of that when I am forced to resign and they forclose on my house and I declare bankruptcy.

Hang on - I actually regret that I did not.