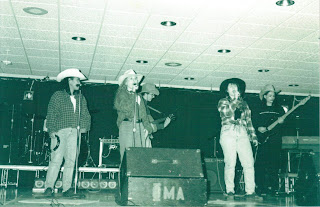 Some of you read my post from January in which I discussed why I don't sing anymore. I have not felt called to join the choir or cantor in my current parish, although when I was in high school I was very involved with the music ministry. Now I'm content to sit in the pew and sing from that vantage point. I also think that just being an average pew sitter has been healthy for me.

This year during RCIA, I happened to mention during one of my talks that I used to sing, and one of our priests happened to be in attendance that day as he was the scheduled catechist. When he took the podium he told the class that he's just learned something new about me; and that we need cantors. He also let me know afterwards that he thinks I should get into it again, and I told him I don't sing anymore. I wouldn't tell him why.

Well, last week I made the mistake of singing a couple lines from a parody in his presence, and he basically ordered me to become a cantor. I initially refused...sort of. But I also realized that perhaps obedience comes into play and perhaps God is asking me to sing again. I had considered long ago whether I should step up, but given my reservations, I offered this question to God as the judge; if He wanted me to sing, then I would have to be invited to do so.

I realized that Father was inviting - nay - ordering me to cantor.

So upon that reflection, I sent him an email and told him that if he really wants me to sing again, I will.

I do have serious reservations about this, partially because I don't have the voice I used to have. But if it's time to offer my voice again for God's glory, then I am willing.

The photo I posted is from college; I was singing "Safe in the Arms of Love" by Martina McBride. I still had a decent voice back then. So have no fear; the above is NOT a liturgical abuse as it did not take place in the context of the Liturgy.

I just pray that, if this cantoring thing does come to fruition, my rusty cords don't cause my fellow Catholics to suffer.
Posted by Adoro at Saturday, May 12, 2007

Adoro, don't worry too much about being rusty, or or feeling that you don't sound as good as you used to. Just put your heart into it, and do it for the glory of God, and you will be fine. I've been singing in choir since I was in 4th grade; don't know if I had a good voice then, don't know if I have a good one now. I just know that I love to sing. I've always figured that if people don't like the way we do it, they can volunteer their services!

At my parish for the last few weeks one of our school's teachers has been singing. She can't carry a tune and has trouble enunciating. I read once that even if a ministry needs people in it, one should never volunteer just to fill up the spaces. One should only volunteer if they have the talent for that ministry even if that means leaving the ministry totally vacant.

Also, Father told us a few weeks ago that EMCs serving at Mass is not a ministry. EMCs visiting the sick is though. I don't think he considers lectoring a ministry either although I don't agree totally with his statement.

I think his reaction shows that your voice is definitely more than adequate to fill their needs. Leave the rest to God and enjoy it. :-)

Criminently, Adoro! Aren't you going to identify yourself in the photo? Second from right? The Star?

Click on the photo, folks, she has kindly linked to a larger version!

With respect to singing, I think that cantors with fabulous voices are intimidating. I would rather have a cantor who encourages with personality and effort all of the congregation to sing.

It is a standing joke among my brothers and sister that we are all "tone deaf." But we all sing "Happy Birthday" and "Jingle Bells" quite well, so that is not true. We just don't sing in public.

Perhaps the biggest miracle that has happened to me in my 26 year long reversion process (and still going) is that I have begun to sing in church loud enough so that the people standing more than six inches from me can hear me.

Listening to and singing with the men of the St John Vianney Seminary sing in chorus gave me some confidence.

And in my new volunteer volunteer ministry at the VA Medical Center, I have had been called on to be a lector for the Noon Mass where I also have had to lead the small congregation in the Allelulia before the Gospel. A capella!

Nobody ran screaming from the chapel!

And I am now musing about the possibility of singing in a male Gregorian Chant Schola that will be forming this Summer. Contact me if you are interested We start on a Monday evening in June at St Raphael's in Crystal, but I can't remember the date or time.

There will be a trained director to lead us.

What matters is that you're there to participate in Liturgy. Song in Liturgy is beautiful, and important, and I am sure you'll do wonderfully well, and most especially that you'll always be aware of what, and for whom, you are doing this. The Liturgy is the work of the people, who are serving in the presence of the Lord. It's better, in my opinion if we know we're not listening to an operatic soprano cantor, just someone using her talents for God's glory. Yay you!

And apropos of nothing, you look nice in a Cowboy hat, too.

I know you will find that your voice will come back to its best with a bit of practice. I have been in various choirs, and one day the very musical conductor told us that we should practice singing a little every day. She said that singing brings out the kind of fluid (saliva I think she said but my memory fails me on that detail!) that actually helps the vocal cords to improve. Enjoy it!

I agree with Ray that cantors with fab voices are intimidating. I went to Mass once where the cantor could have been a professional opera singer. First I thought it would be uplifting to hear a perfect voice but instead it made the Mass a performance to watch. So I say bring on the less technically perfect singers.

LOL! Thanks, everyone. But I just want you to realize that it's been a LONG TIME and I'm really not sure about this. We'll see what happens. I am not making any promises about being "good".

I agree that opera-star voices are intimidating, and I actually don't like it when they are leading the singing. They hit these amazing registers, have extensive and too much vibrato, and they end up discouraging singing.

I have found that the best cantors are the ones who have a good range, can carry the tune, and don't overdo it on the vibrato - they realize they aren't up there to be prima donnas. A few weeks ago a woman I know lead the singing for Benediction and Exposition, and she was very easy to follow. I hope to see her up there a lot more.


Ray ~ I actually didn't link to anything. I just scanned the photo in, saved it, and loaded it as "medium". I'm shocked it's so huge!

Yeah, I'm the 2nd one from the right with the closed eyes and black cowboy hat. I don't even remember what we named our band for that night. I stil have the VHS copy of Gaslight (that was the name of the show) that year, which was my senior year, and no, Ray, you can't see it. :-)

Ultra ~ Thanks. I always wanted to be a cowgirl. I've always liked the hats!

Kiwi ~ I didn't know that. I do sing every day (in the car), but I'm not sure it helps. I do hope that we hire a Music Director soon and that there's an opp for vocal instruction. Our last music director made it a requirement for all cantors to have voice lessons with him, which is a good idea. (We still have soem bad cantors, though - but bless their hearts, they try)

I so totally would join your parish music team if I got vocal lessons in being a cantor along with it. :-)

I wonder if there is a copy on YouTube?

I knew a guy who had a job as a newscaster for a very small town radio station.

He spent quite a bit of time every morning before going on the air "tuning up" his voice. I would imagine that might be important for a cantor, also.

As far as warming up...indeed it is important for anyone singing or speaking publicly to warm up. When I was on the speech team in High School (my category was Creative Expression), we warmed up by talking to doorways and corners. In singing, it's running scales, etc. I used to do a lot of that.

Will you promise to do one Latin tune just to make me happy?

Fr. H., the one who ordered me to sing I think would allow it. He does support adding Latin to the Mass and I know that as long as we're without a Music Director he's choosing the music, so if there was something, say, Latin, for Communion (Adoro te devote comes to mind...) I think he would let me sing it. But I'd have to have some instruction because I don't know all the pronunciation.

Adoro - It's been awhile since I've emailed, but I've been checking in here regularly and sending up prayers for you.

I don't think I went to that particular Gaslight...I do remember them very fondly. I just wanted to know if the bespectacled guitar player is who I think it is...Paul L. I'm sorry to say that I don't even recognize the others.

Great to hear from you, and thank you for your prayers. I've been praying for you, too!

And yes, my guitar player was Paul L. My bass guitar was obviously Goth for a different performance in another band that night...I just LOVE the Goth look with a country band. :-D

The other singers are class of '97.