Let us Bow our Heads...and then talk about dogs

The Saga of the Breadcrust has come to an end.

I just took my dogs out and checked on the remaining crust. It's gone. Mr. Gray Squirrel returned after I closed the drape and enjoyed his dessert in solitude.

So the crust has gone as quickly as it arrived, as silently, and ultimately, as mysteriously. For we cannot verify the coming of the crust, nor can we verify the demise of the crust.

Let us have a moment of silence in consideration of the crust.....


WELL! That's enough of THAT!

Let's move on to other topics...some of you have expressed surprise that I have a Greyhound. I also have a German Shepherd. Here they are: 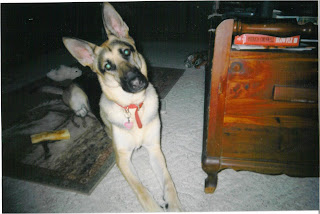 I adopted the German Shepherd from the local Humane Society. She gave me "the look", much like the one in the photo. I didn't initially realize it, but it was all over. She was mine. She picked me, but that night my heart was broken because we could not get the paperwork completed before they closed, so I had to wait until TUESDAY morning to go pick her up! It was so hard to wait! In the meantime, though, I prepared for her, got supplies specific to her size and breed, and read over the adoption materials.

The form used to drop her off at the Humane Soecity was heartbreaking. Clearly a child had written it, and it was not the child's choice to give up her pet. Various questions were answered, such as, "Where does the pet sleep?" The child had written in, "With you." Awww...

I read through the form with tears in my eyes. The last line killed me: "What else do you want us to know about your pet?" Reply: "Just take care of her, please."

Tikaani has been the source of both my consternation and my joy ever since I got her, and exactly two weeks to the day that I brought her home, she identified a problem with my furnace. Dogs are good at that.

When I adopted her, her name was "Sugar Bear." Clearly she had been named by children, but that name had to go. I re-named her "Tikaani" which is a native Alaskan language for "Wolf", and apparently a common dog name up there. She also goes by several nicknames.

Tikaani came with me to pick out my Greyhound six months later. I got him from our local organization, Northern Lights Greyhound Adoption, with which I am still involved. We love our meet-and-greets! Anyway, it was down to two dogs... "Davis" and "Fire". I asked Tikaani to choose her sibling. She sniffed Davis, they acknowledged each other, then as though she understood, she went to Fire,and they had some sort of canine conversation. Then she came to heel, sat down, and looked up at me. No choice made. She approved of them both.

The ball was back in my court. I liked both dogs very much, but their personalities were very different. I was considering getting into pet therapy so needed an outgoing dog..so Fire was my choice. 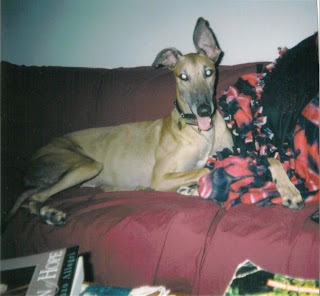 This guy's my buddy. His racing name was "Keystone Fire" and when I adopted him, he was four years old, indicating he had a decent racing career. Most adopted greys are between two and four years old; they are sent for adoption when they aren't successful on the track.

I kept his name, "Fire" because he responded to it, and it fit him. He has occasionally been called "Babbaloo", "Mister Hound", and "Buddy", among other names.

I must upload my story about how I taught him how to climb stairs.

I have TONS of photos of my dogs, and now that I have a scanner and know how it works, I promise to upload more photos of anything other than myself.
Posted by Adoro at Saturday, March 31, 2007

Awww. Cute dogs and nice pictures. I have good memories of both breeds. We had greyhounds when I was a kid; and we were given a German Shepherd puppy as a wedding present. We hadn't checked off "puppy" on the gift registry, but we didn't have the heart to say "no". I'm sure your dogs are good companions to you, and I'll bet they make sure you get your exercise. They're high energy!

Melody ~ What in the world would make someone give a puppy to a newly married couple??? But it's wonderful you accepted the gift; it is a gracious one!

Hmmm...if I ever get married, I'll ask for a horse and free boarding, tack, etc...and see what happens. :-)

Seriously, they are great dogs. But the hound...they aren't active at all. What a big couch potato! He does have to zip around every now and then, but then he's done and ready for a nap.

We get our exercise on morning walks. The shepherd needs more than the hound, though, or she invents things to do, which, for the most part, aren't helpful in any way. And the hound tends to learn bad things from her. :-) And he's impossible to train. Amazing how much he can learn from my other dog, but won't take a lesson from his owner. *sigh*

Very nice pictures. Thanks for sharing!

Adoro, maybe your greyhound figures that he got enough exercise during his racing career, that now he's just going to kick back!
A little background on the "wedding puppy"; my husband was a teacher at the time we got married. The young girl who gave us the puppy was one of his students; she was also the daughter of his mother's best friend. One of those small-town moments!

I've met Tikaani and Fire and had the privilege of helping Adoro walk them. They are both very handsome and quite gentle towards me: a complete stranger. I did not even have to bribe them with treats or breadcrust!

Melody ~ Are you sure you're not getting greyhounds mixed up with whippets? Greys are known for being "40 mph couch potatoes". They are known to be sprinters. Literally, they zip, zip, zip....done. Whippets and Italian Greyhounds, on the other hand...are NOT couch potatoes!

I often meet people who think that because greys are racing dogs that they are "hyper". They are anything but. A hyperactive greyhound is an anomoly. Just do a google search on greyhounds and you'll find article after article about how mellow they are.

With that said, though, they are not recommended for children under 5; the dogs coming off the track don't have much experience with humans, and children are a mystery. My own grey is still terrified of the 9 year old next door, and it didn't help that every time she saw him she screeched in her highest register, happened to be flapping something around whenever he appeared, etc. She didn't mean to do this, but it emphasized his fear of her so his shyness is what most of the neighbors see. Whenever someone comes over, they have Cathy's experience....he carefully sniffs, carefully approaches, and then begs to be petted...because that's what greys are all about! LOL!


Cathy ~ Yeah, they loved you. You're a pet person. :-) They love anyone who will give them attention. Because, obviously, I just don't pay enough attention to them.....