The Mystery of the Breadcrust 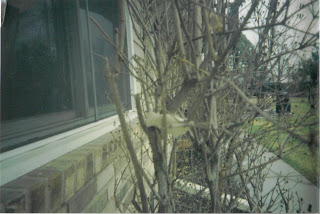 The mystery may be solved.

I was just sitting down at my computer to work on my paper this afternoon, when out of the corner of my eye, I saw movement which startled me. At first I thought it was a rat. It wasn't, altough some of you may disagree.

My computer is right next to the window, and just outside the window is a small ledge, and the bush containing my own personal breadcrust.

When I saw the movement, I looked up just in time to see a squirrel trundling by just outside my window, pause to glance in at me, and continue on as though he belonged there. He seemed to be quite comfortable with his location and the proximity to my window. After he had run away, I opened my door to see if my grill-cleaning thingie was still on the ledge; it was, but it was somewhat askew.

And the evidence next to it: a breadcrust. 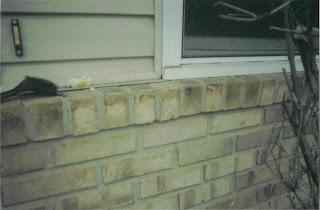 The neighbors just threw bread out again today, this time very close to my door as well. (Which is really annoying as my greyhound always tries to eat that stuff and I'm not always quick enough to pull him away).

I suspect that the squirrel had been trying to take the bread but was attacked by the numerous crows that like to bully all the other suburban creatures. The squirrel headed for the quickest haven, that being the bush and the ledge, but in the process of escape, he dropped the crust.

Of course, that explains the crust that is now on my ledge, but it doesn't fully explain the one in the bush. Maybe the squirrel that put that one there was exceptionally adventurous? Maybe he was also trying to escape the crows and dropped the crust in the bush before scampering away after learning the bush would not support his weight?

But anyway, my bread crust has now multiplied; I have two of them and some crumbs.

And bonus, I got a really good close-up view of a squirrel.

I found a camera I forgot about and took a few photos of the crust. If I can get to a one-hour photo place I may scan them in later today.

Thus you will be able to see that the breadcrust is REAL.

I got back from Adoration and errands, photos in hand. When I pulled the curtain back, I saw that the bread on the ledge has changed locations, moving further down and away from the grill brush. I opened the front door and observed that most of the bread is gone and that the adventurous squirrel ALSO ate most of the breadcrust in the bush. And the grill cleaning brush had been shoved a little bit and is precariously close to fallng to the ground.

That is one BRAVE little rodent!

So the infamous breadcrust is still there, lodged in the bush, but it has been discovered, it has apparently become food for my new "pet" squirrel.

While composing this update, I saw movement again. The squirrel came back for the bread on the ledge! I moved slowly and he didn't see me because he was intent on his dinner and his back was to me. Because he was also facing the crust in the bush, I watched to see if he would go for it next. He didn't, but rather, turned to go in another direction. He might have discerned movement behind the glass of the window and spooked.

I sat down again to type, and he scuttered by the window again. I'm a little disturbed by his location and the fact that he seems to be busy at the end of the ledge where I kept the grill brush. Suffice to say that the brush is going into the trash and will no longer be used to scrape/clean the grill.

But the remaining piece of breadcrust is still lodged in the bush. I wonder if the squirrel has given up on it? Or will he come back again yet this evening for dessert? He clearly knows it's there.

So thus the saga of the breadcrust continues, now with the addition of the antagonist, Mr. Grey Squirrel. Stay tuned...
Posted by Adoro at Saturday, March 31, 2007

Email ThisBlogThis!Share to TwitterShare to FacebookShare to Pinterest
Labels: Breadcrust

A bread crust in the hand is worth two in the bush....sorry, couldn't resist!

LOL! I actually wrote that in my first post about the breadcrust...I couldn't resist, either, and I almost said the same thing in this post!

Just updated the post, by the way...you haven't read the latest....

Adoro: I thought of you this a.m. because I threw some bread out for my catulpa squirrels. They usually leave or drop some of it on the ledges around my porch. They are especially fond of leaving it by my back door for some reason. Maybe I'm the ultimate source of your crust?! (I dare you) Do you think it traveled all the way from St. Paul?

No, I don't either but it makes a good legend for the crust. Probably in some apocryphal text.

Not to go off on a detail of your story (and I've not been with you long, you may have long talked about this) - YOU HAVE A GREYHOUND!? I suppose you must have saved him? I used to do the blessing of the (saved) greyhounds in Cleveland before the big charity walk. What GREAT dogs (unless, of course, there happens to be a squirrel or a rabit around.)

I can't believe I am following this drama with baited breath.

What will happen to the bread crust now?

I honestly don't know what to say - which is unusual for me.

But you have a greyhound! I love those buses!

Fr. V.... yup! I got a grey! He's a sweetheart! See my next post, I have a photo of him and my other dog. And a link to the organization I got my retired guy from. Can you bless my dogs from afar? :-)

Wow, you had pics of your breadcrust....
here I thought you were making a whole metaphor out of it all when it really did exist!

See! I thought the same thing, that it was Christian metaphor and the role of Satan would be taken by a rat or other vermin. Then it became clear that it was a real story. It was disappointing, somehow. No offense, Adoro.

Rob ~ You have to look at this through different eyes.

Yes, it was a real breadcrust, but there's also a message here; God is in the small things in life. His works are not always apparent.

First we have a crust that "mysteriously" appears, and seems to remain, unnoticed. Throughout Lent.

Then suddenly, food is abundant, but the one who is chased from the food finds it - in the crust. The squirrel, then, perhaps is a metaphor for US...we seek to escape the attacks of secularism and we find what is not so apparent. Sometimes it takes heroic effort to find the hidden bread, but it is there.


And another message...you of little faith, to not believe in the breadcrust, only to find that the breadcrust is true! And the bread is real food! (for a squirrel..) But still, real food, just the same!

well! its just that fact that its been there FOREVER! and hasnt been taken YET till now. After all that snow and rain and fog and crap. Still....bethys shocked, and baby...that doesnt happen TOO OFTEN! ;o)