When Mother Teresa died in 1997, I was working nights and with nothing much to do, I rediscovered my love of art. I had never been able to take a serious art class so I didn't have much to work with, so I could only call upon the very basic mediums with which I was familiar; pen and ink, and charcoals/pastels.

In 8th grade art class, the teacher recognized that I had a certain ability and he wanted me to develop it further, and I'll admit that his encouragement remains valuaable to me even today. Sometimes we don't know that we have certain gifts unless someone actually sees that spark and asks us to take it further, perhaps coaxing it into a flame.

Well, my sights were set on studying Spanish, so I studied that, to the detriment of the art which remained an innate part of my soul. I don't regret studying Spanish; rather, I wish that there had been other, greater opportunities to study art more seriously and in greater depth.

I was never good at portraits and I didn't like having to work from the models and modes they suggested; I felt hampered by it. For example, in order to draw a face, we'd have to use a ruler to draw the lines where the eyes would be, where the nose would be, etc. I struggled and struggled with this. I was able to do well in capturing the shape of someone's jaw, but the "line" method actually seemed to hinder me from seeing and replicating what was there in front of me. I'll never know why that is because this is a great method for drawing portraits. But when I began to do portraits, I began with whatever line happened to stand out to me, usually the line of the brow.

So when I was rediscovering my apptitude for art, I also happened to be struggling to come back to my faith. Mother Teresa had long captured my imagination and my respect; such a small woman, such a large faith! I knew people who had gone to India and they'd actually been able to meet her, and through that were transformed.

When she died, I suffered real grief, realizing that I would never meet the saintly woman; she had left for eternity.

Point to make about artists; we express ourselves through art. We take the grief, the joy, whatever emotion happens to have fallen upon us, and we translate that into our chosen mediums. At that time, I was suddenly hit with an inspiration to draw Mother Teresa.

There were some photographs of her in a biography I was reading, and so I opened the book and began, painstakingly, to try to capture the essence that was Mother Teresa. I fell in love with her all over again as I drew the picture below, capturing the line of her brow, the wrinkles that made up her face, her care-worn hands. Through such an intense study of her physical appearance, she came alive at the tip of my pencil, and I began to truly see the wonder of the design of humanity. As I drew her, I also drew closer to God, in complete wonderment realizing that as I reproduced every single wrinkle and the curvature of her fingers in prayer, that God knew of each and every wrinkle, had designed each and every bone that made up her structure, and He knew her deeply beyond the face and the veil that so captivated the world.

And I realized that if He could know Mother Teresa so deeply and personally, then He also knew ME that deeply and personally. So I continued drawing with a newfound joy, and when I thought I was done, I realized that I had not finished the picture; there was room for a second image, resulting from the first, and in the end, the first image actually AROSE from the second. 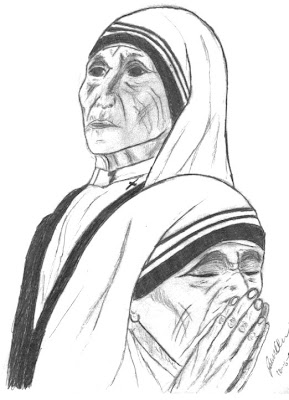 I was struck today by this image; Mother Teresa was who she was because of prayer; it was prayer and union with God that transformed her from a simple, everyday woman to the spiritual giant she became, and the strength she provided in her very presence. She absolutely RADIATED Jesus Christ. Now, when I look at this image, I realize that we are ALL called to do what she did; we are all called to give ourselves utterly to God, which can only be done through deep conversation with God in prayer, and through the Sacraments, and allow Him to live through us.

I love your Mother Teresa.

Juliet of the spirits...I read your blog faithfully everyday and I am always humbled...

Your drawings are quite good, while edifying in their devotion.

I'm grateful you have shared them with us...you have a devotion that is deep, and a spirituality that comes through in a certain eloquence in your writing and your art.

You are truly gifted.

I apologize for not commenting more - perhaps I'm a tad intimidated.

God love you and continue His good work in you - I doubt if you are aware of your contribution to the spirituality of those of us who read you.

In the heart of Jesus, Terry

One more thing - I've tried to comment before but I couldn't get through!

I apologize, because I know what it is like to put one's art out there and then not get any feedback. Art expresses the soul.

Where did that name come from?

Terry, you know I love you to death, and I was only offended because I thouht you didn't like me anymore because I'm Irish. :-)

Yeah, I tried to comment on your blog the other day and it wouldn't work. Such is life. *Sigh*

You are such a doll!