Skiing and the Spiritual Life 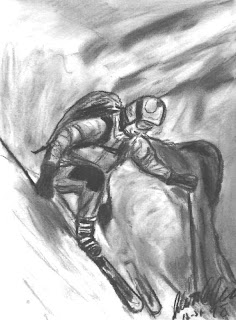 A couple weeks ago, an old friend called me up during the blizzard and his first words to me were, "That's white gold falling out there!"

I agreed. I love skiing, but I haven't gone in over a year. If I don't make it out this season, it'll be two years that my beloved sport is being neglected by me. That just isn't a good thing.

We planned to go to a local ski area this week, and I went to sleep that night with dreams composed of carving arcs on bright white snow, the feeling of the frigid air on my cheeks, and the sound of the rushing wind whistling in my ears. The rememberance of my last race, the flashing gates, the sound of my edges holding an impossibly small margin as I extended briefly into the apex of my turn in order to be kicked smoothly into the next. The power contained in the balance between control and loss of control - soaring...seeking...flying...

Pope John Paul II was also a HUGE fan of skiing, and I suspect that he found the same freedom in the sport that all we enthusiasts do; there is a purity in the movements and in the sport itself arising from the very cooperation with God and His Creation. We utilize Creation and the elements and in doing so, we soar, we are joyful, and the only thing we can do is praise God for the beauty of the earth He created and the fun we can create out of what would otherwise be nought but a hardship.
I love skiing. Did I mention that? 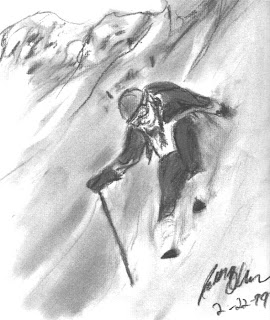 But there are lessons to be found in skiing that go beyond the sport. Father Corapi likes to use military metaphors, which are easily understood, but perhaps don't appeal to everyone. I like to use skiing metaphors, and admittedly, those won't appeal to everyone, either, but much of what I learned from skiing can be learned from other sports as well.

Some of the lessons I learned from skiing which also apply to the spiritual life::

* Don't be afraid of crashing. If you're not crashing, you're not trying hard enough.

* If you want to be good, you need the right equipment; if you're not willing to invest yourself you'll never make it. But don't go overboard; to do so makes you a slave. Elitism only makes you look like an idiot.

* People are just moving slalom poles. Plot your course, maintain control, and be prepared to react quickly when something suddenly comes your way.

* If you crash into or because of someone else, even if it's their fault, apologize and help them pick up their stuff.

* When you get off the ski lift, don't stop where you are if your're not ready to move on. Get out of the way and let others pass you.

* If you find out that you are in over your head, just keep a good lookout, go slowly, fall back upon the basics, and don't be afraid to ask for help. It's better than pretending you know more than you do and end up being carted off in a toboggan.

* If you come upon an accident and are in charge of marking the spot by setting your skis into the snow in an an upright "X" pattern, make sure you're wearing gloves when you do so. Those edges are sharp!

* Take care of your equipment; use the approprate wax, wipe the skis down after use, and be sure to keep them in top form. Proper care of the fundamental tools can prevent injury and even save your life.

* Don't be afraid of pain; when it hurts, it means you're doing something right, especially early on in the season. Just remember; there is such a thing as "good" pain and "bad" pain. If you can't figure out which is which, then find a coach to train you properly. 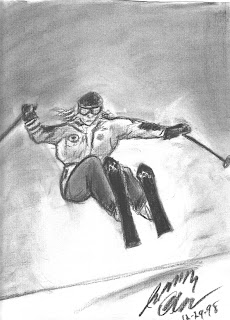 * At the top of the hill as you begin your run, fix your eyes on your goal and don't ever lose that focal point. You will thus be able to see and react to everything between you and that point and be able to react accordingly. Your focal point affects your form, your course, and directs your abilities as well as your attitude.

* The feeling of fallng is normal if you're in the correct position; it's what drives your forward movement. Trust is key.

* Always remember that no matter how much you know, there is still more to be gained and further progress to be made. No one is ever done learning, no matter how phenomenal they seem to be from the outside.

* Always be ready to learn from those you instruct.

* Skiing is not about rewards; if you're doing it for rewards you're missing the point.

* If you are true to the sport, do it with integrity - people will follow. Don't set out to change other people - be good and people will change to be like you. (Fr. V.)

* If someone of lesser ability asks to ski with you, welcome them along, don't push too hard, and be prepared to eat their powder; if you teach them correctly and with integrity, they may surpass you in ability in knowledge. Let them go, and be humble enough to follow in their tracks.
Posted by Adoro at Wednesday, March 14, 2007

You have some good rules, there Adoro! The kind that you don't normally see in the ski magazines.

I learned to ski when I was stationed in the Army in Germany. We were about 20 miles from the Austrian border and one winter rented a chalet near Kitzbuehel for the entire season. It was wonderful.

Some comments relating to your comments:

a. "Ski with someone better": That's the only way that you really get better.

b. "Don't be afraid of crashing." I taught a few people to ski and always the first I taught was the first thing taught me. How to stand up after you've fallen. (Rule No. 1: don't point your skis heading downhill). If you think you're not going to fall, you're very mistaken. And often just standing up again is diffult, especially on steep and icy slopes.

c. "Over your head." Once after we had finished a week of ski lessons on lower slopes we decided we were ready for the top. We saw on a map/chart of one of the two mountains there that there was a "bowl" where there was lots of recreational skiing. But we took the wrong cable car at the "Middle Station" and ended up at the top of the mountain. I would love to have a picture of us struggling up to the top and then glancing down and seeing that the "bowl" was 1000 or so feet below us. We were in an area for extremely advanced skiiers. We had to pay to have the cable car take us back to the Middle Station where we could find the car for the "bowl" area. All the advanced skiers got a big kick out of us getting off the otherwise empty cable car.

d. "Accident" I watched a friend break his leg in deep powder once when he was barely moving, but his skis crossed and he fell forward at an angle that his safety bindings didn't release properly. The powder was so deep in that area that when I fell just before he broke his leg, when I drove my pole into the snow to get some leverage to stand, I couldn't find ground even when my arm was completely in the snow up to my armpit. I had to remove my skis and role over to the trail where the snow was packed down.

I love to do cross country skiing - and do go on a sitski, adapted for people with paralysis. The trip I go on is called Ski for Light, for visually and mobility impaired people and I've seen alot of these lessons take place on those trips. Watching blind folks ski trusting the voice of another person as their guide is, in itself, a spiritual lesson in many ways. And this illustrates "always be ready to learn from those you instruct" - because their guides always say they've learned more than they've taught the blind skier.

Ruth ~ I used to ski patrol and I remember when those groups came to the ski area all the time. It was amazing to watch them and just share in the joy of flying down the hill! What trust it has to take for a blind person to have that experience. I'm not sure I'd have the courage.

I also used to race and we had a guy join our team a couple times as a guest skier - he was a sit skier, and he was really good at it! We were all amazed at what he could do and so he gave us a "lesson", verbally, anyway, as to how it all worked.

My Dad was a ski unstructor for years. He was an excellent skier - well into his 80's. He had to stop instructing because he couldn't go down the hill once without someone wanting to be instructed by him. So I add that to your list - if you are true to it, do it with integrity - people will follow. You don't set out to change other people - be good and people will change to be like you.

Fr. V., how true! When I made my debut into skiing, I wasn't much of a skier at all...I could barely stand up on downhill skis! But I wanted to do Ski Patrol, and so I was at the area all the time.

The ski instructors, many of whome were elderly, took me under their wings and EVERY TIME I went up there, they gave me a lesson whether I wanted one or not. It was people like your Dad that I credit for my ultimate success within only 6 short weeks.

And what a great observation you make. Thanks!