The Parable of the Breadcrust 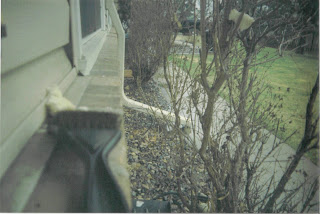 Matthen 6: 25
"Therefore I tell you, do not worry about your life, what you will eat (or drink), or about your body, what you will wear. Is not life more than food and the body more than clothing?
26 Look at the birds in the sky; they do not sow or reap, they gather nothing into barns, yet your heavenly Father feeds them. Are not you more important than they?
27 Can any of you by worrying add a single moment to your life-span?
28 Why are you anxious about clothes? Learn from the way the wild flowers grow. They do not work or spin.
29 But I tell you that not even Solomon in all his splendor was clothed like one of them.
30 If God so clothes the grass of the field, which grows today and is thrown into the oven tomorrow, will he not much more provide for you, O you of little faith?
31 So do not worry and say, 'What are we to eat?' or 'What are we to drink?' or 'What are we to wear?'
32 All these things the pagans seek. Your heavenly Father knows that you need them all.
33 But seek first the kingdom (of God) and his righteousness, 19 and all these things will be given you besides.
34 Do not worry about tomorrow; tomorrow will take care of itself. Sufficient for a day is its own evil

A couple people expressed disappointment in the ending of the parable of the breadcrust. I imagine that in the time Christ walked the earth, many were also disappointed and went away not understanding. We as Christians often don't understand what is before us, but the reality is that God still speaks to us in parables, and sometimes these parables are humble stories that occurr right outside our windows. Those stories aren't always about us, in fact, they are rarely about us, but this is as it should be. In this way, God is inviting us to come out of ourselves and to come to him to experience his grace in wonderful ways.

I think the breadcrust was one such situation. By itself, it was meaningless. Who cares about a piece of discarded bread? I mean, really? Will this crust change anyone's life? Will it save anyone? If my house burned down and I had no food would this crust sustain me? Of course not. Then why was it important?

It wasn't. Not to me. It served as a "gimmick" of sorts, being that it mysteriously appeared in an odd location. I chose to leave it as it was, and over time, when it did not shift, it did not blow away, and it did not seem to be discovered by any creatures, I began to wonder what would happen to it. This silly object; a piece of stale breadcrust likely not fit for human nor animal consumption.

I don't think it was any accident yesterday that I got a front row seat to the workings of God's divine hand, in accordance with scripture. God always keeps his promises; the parable of the breadcrust is all about trust in God. I will explain.

Since it is becoming warmer even here in cold Minnesota, the animals have come out of hiding, the birds are more abundant, and as the food is not yet abundant, they are all fighting for survival. When people throw out the breadcrusts or birdseed, the animals flock to it it droves, trying to get there first to get their fill. Yet the crows, the avian mafia, continue to chase the other creatures away, squirrels included. Squirrels tend to run, find a perch, and scold the offending crows quite haughtily, which of course, the crows ignore while they munch away to their little hearts' content.

Sometimes, though, the creatures assert themselves a little more; I suspect the squirrels may have run out of their buried stashes, or at least forgot where the rest of them are. And of course, like humans, they are going for what is easy; the bread and the birdseed.

Yesterday, I think Mr. Grey Squirrel was chased away from the fresh bread but managed to escape the wrath of the crows with a crust in his mouth, which he dropped when he reached my ledge. He came back for it in his hunger, finding it was still there. The crows don't tend to hang out that close to the windows.

While there, he discovered the other crust, the one that has been there for awhile. So the little guy was able to avoid the crows and still feast on what was needed. He had to work to get it, but the food was there. He maybe wasn't the one who put it there, but that crust sure was preserved for that small creature through God's Divine Providence.

Do you remember my first couple posts on the breadcrust? I said, "God Provides."

I had no idea at the time what would happen, but as it turns out, that is the moral of our story. God provides.

I think I understand, and I hope you do, too. The fact that we've all been able to watch this unfold before us is no accident; it is all about God, showing us that he provides for the smallest creatures, the most hated and despised creatures. He, who loves us so much, we, the only creatures with free will who freely choose to reject him, became one of us. He did not become a squirrel or a toad or anything else. God was born of a woman and became man. For us.

God provides for squirrels in mysterious ways we normally don't get to witness. If he does that, then how much more will He provide for us, whom he loves so dearly He suffered the agony and humiliation of the cross on our behalf?

Do not doubt the breadcrust; it's not about me, and it's not about you. It's all about the hand of God, the love of God, and a reminder that He knows of the most humble and insignificant things; and provides.

what a post! God doesn't work in "gimmicks." He works in signs (Gospel of John) and miracles (Mt, Mk, Lk). same for "coincidences."

you described it all so well, with such fervor, and such faith. i think we're seeing a gift of the spirit at work here. (I think I said that to you once before.)

Have a blessed Holy Week with Him.

Fr. Ben ~ You are an inspiration to me - have a blessed Holy Week yourself!

I'm sorry to see the Breadcrust go but you explained it all so beautifully.

In any case, you will always be Leviticus, Keeper of the Bread Crust(y) to me!

NOW what can I POSSIBLY talk about?????