The Lord in the Hand

When I was a little girl, we learned to receive Communion only in the hand with an afterthought mention of receiving "by mouth." So I spent most of my life allowing Jesus to be placed into my hand, and early in my career as a Catholic, I predictably dropped Him on the red carpeting while trying to be "reverent" in my reception.

I didn't know what to do, so I quickly considered that Mom told me that this was Jesus and I didn't want to step on Him...so 10 second rule applied. I quickly stooped down in my little dress, picked up Jesus, and popped him into my mouth...skipping happily away back to my pew. (Seriously....I was afraid I had held up the line so I "skipped" so as to get out of their way).

Mom was mortified...Father just shrugged (I caught this action as I had stood up and glanced at Father abashedly), and it wasn't until I was an adult that I learned I had done exactly the right thing.

They never told us what to do if such a disaster happened, and for years, I was completely embarassed about the incident.

A couple years ago, I attended my first Latin Mass, at our wonderfully famous Church of St. Agnes in St. Paul, MN. It was my first experience with, not only the Latin, but with the music, the communion rail, and reception on the tongue.

By then, I had read enough and I had considered trying it but was afraid to do so, so apparently God arranged that I would have no choice. So it was that I found myself kneeling at the communion rail as Father Altier came by, the faithful altar boy at his side with the paten...and Jesus came to me as appropriate: while I was on my knees.

From that point on, I could not bring myself to receive in the hand unless there was some reason why I couldn't (cold sore, major cold, confused EHMC, etc.)

But there are many who do receive in the hand, perhaps the majority in America, thanks to the misguidance of some of our Shepherds of the past, so thus we are obedient to this permission.

Thus we all need to be informed as to how to properly recieve Jesus in the hand.

Father V. has a GREAT and humorous post on this, and just for an enticing snippet: 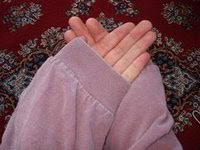 E MODEST MANUS - I find it strange that persons who don't mind showing their mid-drifts or legs beginning just below the hips will be modest about exposing the skin of their hands in church. Please let me assure you that not only, at least in the instance, is it alright, it is also mandatory.

Read the rest and propogate this throughout blogdome and your parishes!
Posted by Adoro at Friday, April 20, 2007

My son learned to receive in the hand just as you did. Then a priest at our church made him receive on the tongue because he had his homework assignments written on his hand. He has received on the tongue ever since. I also at the same time took him to a Latin mass to show him how I was brought up. He was amazed at the communion rail,the patin etc. Many priests think this is foolish but I like to go to the old Latin Mass once in a while. Maybe for old times sake. But this was all I knew for a long time!

I can guess, but you tell me first.

Ray, it's what you think it is, because I've never heard the term used in a way inconsistent with that one commonly understood meaning.