I have been contemplating the cross a lot lately, which is quite normal for all of us this time of year. Yet sometimes I think our Protestant brothers and sisters are so anxious to get to the Resurrection they forget that before Jesus rose, he suffered and died in a profound act of love in the reversal of sin.

I was listening to the local Protestant Christian radio station the other day, cringing as they referred to this as "Easter Week." Uh, no, that's next week. Then they went on to discuss how we are going to celebrate that Jesus "rose from the dead...for YOU!"

Back up. Yes, Jesus rose from the dead to free us all from death; but first He died a cruel, punishing death, and he had to do this to reverse the sin in the Garden of Eden. There can be no Easter without Good Friday. So let us delve into what Good Friday was about; let us see why Jesus had to suffer and die for our sins.

In Genesis 3: 17-18, we see the results of Adam and Eve's disobedience; "cursed is the ground because of you; in toil you shall eat of it all the days of your life; thorns and thistles it shall bring forth to you."

In Joshua 23:13, we read of the punishment of Israel for their sins: "know assuredly that the Lord your God will not continue to drive out these nations before you; but they shall be a snare and a trap for you, a scourge on your sides, and thorns in your eyes, till you perish from off this good land which the Lord your God has given you.."

The Passion begins in the Garden; the Lamb of God, innocent of any sin, is betrayed and taken into the immediate abuse of the Roman soldiers. The sin of man began in the Garden of Eden, thus it is appropriate that the reversal of sin begins in a similar place.

Jesus is lead to trial, where he is trapped; he does not resist, but has been taken into the snare, willingly, voluntarily, and obediently, his heart prepared, having already offered his sacrifice to his Father in Heaven. It is the perfect love of Christ; the perfect obedience of the Son of God.

Sin is a rejection of God's love; here Jesus reverses that and stands as our mediator, returning God's love fully by giving everything he has, even until his life, in the face of countless humiliations, indescribable agony, and impossible spiritual tortures. Yet he is innocent of any wrongdoing. He has not sinned. Jesus loves with the very love of God; only he could take on the sins of the world for only he possessed the divine love strong enough to overcome the greatest evil. He suffered with a human body, and loved with a human heart; he is the bridge that reunites us to the Heavenly Father.

We follow Jesus as he carries his cross to Golgotha, he embraces it, obediently, in spite of his agony, in spite of the ridiculing soldiers and spiteful crowds, in spite of the weeping women, he carries on, giving everything, every drop of blood, every gasp of his lungs, every torturous step, to his Father in Heaven for expiation for our sin.

And the cross...what of the cross? Deuteronomy 21:22 states, "And if a man has committed a crime punishable by death and he is put to death and you hang him on a tree, his body shall not remain all night upon the tree, but you shall bury him the same day, for a hanged man is accursed by God; you shall not defile your land which the Lord your God gives you for an inheritance."

Jesus the innocent Lamb, became "the accursed". Jesus, for our sake, was made to be sin, who knew no sin. (2 Corinthians 5:21) He took on the punisiment for our sins, the very punishments bestowed upon Israel for their sins. Finally, Jesus experienced the rejection of the Father, the complete abandonment of the Father, to overcome the rejection and disobedience by Adam. Just as Adam had turned away from God, the Father turned away from the Son, a punishment no human being could withstand. With his suffering and death, justice was fulfilled; redemption was accomplished as all the iniquities of man were laid upon Jesus, who so willingly paid the price.

Galatians 3:13: "Christ redeemed us from the curse of the law, having become a curse for us - for it is written, "Cursed be every one who hangs on a tree." 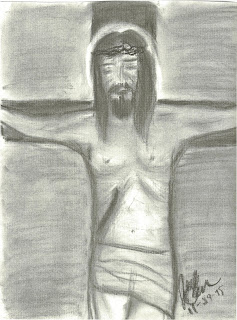 The sin of disobedience was eating from the wood of a tree; Jesus, to reverse this, became sin, and was left to die brutally, hanging on the wood of a tree. We, as Catholics, also participate in this reversal of sin in the form of completing this new Covenant; we, the Bride of Christ in this mystical wedding, also consume the fruit of the tree; the wine poured out upon us, that wine that is the very Blood of Christ, that flesh that is the Body of Christ. We, too, eat from the wood of the tree. But rather than eat from the tree that brought death to the world, we eat from the tree that brings the world to new life.

There is no Easter without Good Friday. There is no sacrifice without love. Let us all spend time reflecting on Jesus, made to be sin, he, who knew no sin. Let us consider the thorns, the scourging, and punishments served upon Israel for their disobedience, let us consider our own disobedience and rejection of God's love, and as we pass through Holy Week, let us be condemned, convicted, and converted by the Blood of the Lamb.
Posted by Adoro at Tuesday, April 03, 2007

That was so beautiful. If more of our separated brethren could see this, they would long for the Truth of Catholicism. I regret the 30 years that Easter was just one day and we skipped over Lent, and Holy Week .
Similarly, as an evangelical, we tried to skip over suffering in our lives, there was no theology for it, and hence we focused on the VICTORY IN JESUS, neglecting the fact that the VICTORY came as a result of the events played out so vividly during Holy Week.
Thanks for the insightful post.
It has inspired me!

For most of my Christian life Easter was a day. One day and a day with much less a do about it that Christmas. I am so blessed to experience my second Easter, an entire season beginning with this Holy Week. Peace be with you.

P.S. I had misplaced your link but have now added it back to my list of appreciated writers.

Onionboy! Glad to see you again. I lost your link as well when I upgraded.

Thanks for the visit, and have a blessed Holy Week!

Adoro: Beautiful and profound. I'm pleased that more people will be exposed to your writings via Catholic Daily!