The Fire and the Stairs

FR. V., this one is for you and all the other Greyhound enthusiasts out there! Fire stood looking at me, ears pinned, his gentle brown eyes questioning how I could do this to him. He was interested, yet fearful…and as I sat, watching, he turned around in an awkward circle and let out a soft whine. The sound conveyed a lot and I wished I could duplicate the vocalism.

My other dog for once simply laid on the bed, gnawing at her bone while I struggled to understand what more I could do to get my new Greyhound up the stairs. I signed, then, realizing Heather had been right….I had to force him. If he was going to “grow” he needed to be pushed…what I was trying to teach him went against his natural instinct.

So I got his leash and before he could get too excited at the prospect of a walk, and with Tikaani racing around, also fooled into standing at the door, I pulled my big red newcomer to the base of the stairs and forced him onto the lower landing. He stood, shaking, head down, ears pinned. I couldn’t look at his eyes and see the fear I was causing.

Sweating already, I soothed him and then urged him to the bottom step. He stood planted, not willing to move any more so than a marble statue. Careful, speaking encouraging words, I manually placed his front paws on the steps and set them appropriately although he wanted to bend them beneath him. When my urging didn’t move his rear legs, I also put those on the lowest step. Grasping the railing so that I would not fall backwards between Fire’s klutziness and my own, I forced him up the stairs, stopping when he did to repeat the procedure, but praising him all the way.

I couldn’t believe how awful I felt for making him do something he so clearly had no interest in learning; at least, not while he was learning it. But I remembered the yearning look in his eyes while he had stood at the bottom of the steps, watching Tikaani and I at the upper level. I knew this poor ex-racer wanted his wings, too…so we continued.

Once at the top he rushed into my bedroom and sniffed around, occasionally come to me with his ears raised and cocked, smug in his finally arriving at the top of what must have seemed like an impossible tower to him. But what he didn’t understand was the law of physics - and that once he was up, he must learn to come down.

I wondered if we’d drag the entire upstairs carpeting with us as I forced Fire to the top of the stairs. Wow! This dog had such an ability to make me feel like a horrible human being!

But again, with kind words, lots of pats and praise, and much muscle, I managed to get him started down the steps. I found that if I used the leash at his front and kept a hand on him, he found the courage to crawl step by step. Happy with the success, I immediately turned him around and we forced our way up the terrible, terrible stairway once again. This time I didn’t let him explore. We dismounted again and I saw no improvement, no increase in his courage.

I wondered if I was doing this all wrong and in the process, ruining him. But Fire, unlike his namesake, was very forgiving and shortly after our second trip down the stairs, he seemed to forget all about the terrifying experience. He romped around clumsily with his “sister” the German Shepherd while I wiped the sweat off my face.

The next evening we repeated the routine. Fire was just as frightened although it seemed to go a little better. I had decided that I was sleeping in my room that night, not downstairs near him while he became accustomed to the kennel and his new surroundings. So it was time to force the issue and I “attacked” the training with great resolve.

Again, we stopped after two trips as I didn’t want to overload him. But I was encouraged by his small improvement and was pretty sure I wouldn’t have to carry his muscular build all the way up the steps before I tried to sleep. So in order to help him in transition, I carried his bedding up the stairway and arranged it in my room. Hearing him whine plaintively at the bottom landing, I went to the top of the steps and sat, looking down at him.

Fire broke my heart. He stood forlornly, looking at me, his deep soulful eyes asking me how I could be so far away and so unreachable. My own heart was asking how he could stay so far away and not TRY to come up the steps. Slowly, I eased myself down the steps, all the way encouraging him to put even ONE PAW on the lower step.

Finally, I sat just above him – but couldn’t quite reach him. I hoped he’d meet me half way. Fire only stood there, a statue again, but his eyes never left mine.

I wondered what hindered him then thought back to some comments other greyhound owners had made; that the dogs were afraid of heights, that it was so new. And I considered too that puppies normally learn stairs when young and unafraid, but here I was asking an adult dog with long gangly legs to learn something which just didn’t make any sense in light of his experience. And like an adult maybe trying to climb a tree for the first time, Fire was afraid. And justifiably so.

I further realized that he and I shared different facets of the same fear. My heart caught in may throat, forming a lump and suddenly I understood his barrier. I remembered my own mortal fear as I climbed a ladder in turnout gear in firefighter training, having had to make the decision to climb…or run away forever. At the time my fear was bigger than the terrible ladder, but the goal – the roof, the accomplishment – had to be enough to overcome something that went so blasted harshly against my nature. 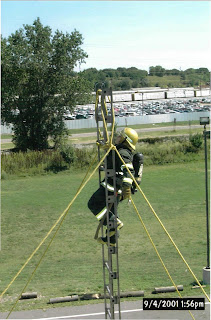 I remembered shaking all the way up. Several time I remembered the pride I felt every time I reached the top of a ladder, and how scary it was to come down, always expecting a misstep which would cause me to fly headlong down to the unforgiving cement apron of the training ground at the base of the tower.

I remembered encouraging words from friends and the resolve that I would not let this fear beat me; if others could do it, then so could I. But even so, I could not stop the tears behind my eyelids, thankfully hidden under the yellow helmet and heavy turnout gear. Those tears that did fall blended easily with the sweat pouring down my face and the redness caused was camouflaged by the redness from physical exertion.

In that moment, all of that flashed before me, and I understood Fire completely. I knew his fear and he knew mine. Our eyes held, I reached down to pat him, having to drop one more step to do so. Slowly I climbed the steps and returned to arranging his bedding so that he would be comfortable. I put his “baby”, a little squeaky plush alligator toy on top, ready to welcome him after the next journey. Sighing, I knew exactly why I had to force him up; because overcoming this fear would make his life better by leaps and bounds, and free him.

I heard his whine again, and the sound of paws on the steps. I was certain Tikaani was taunting him again and turned to see if she was actually doing so or still lounging as she had been before. Much to my surprise, Tikaani was still there but had sat up, ears pricked, eyes bright, and head tilted. Her tail displayed the beginning of a wag. Holding my breath, I turned toward the stairs just in time to see Fire emerge, get his legs under him and shake himself. He looked at me, ears jauntily half-cocked, and pranced toward and around me, happily dancing in his doggy pride. I patted and praised my new Grey, understanding that both he and I shared different versions of the same accomplishment.

Just as I had received a heartfelt hug from a fellow cadet facing the same fear, I hugged my Fire and knew our newly formed bond had just strengthened tenfold.

I find it ironic that I had to learn to climb a ladder to face the fire, yet in real life, Fire had to climb the stairs in order to be with me. Sometimes in facing our greatest fears we obtain more than the ability to face our personal dragons; rather, we learn how to strengthen others to conquer their own. And in the end, both are deeply blessed.
Posted by Adoro at Sunday, April 01, 2007

A beautiful story, and a powerful insight. Thank you.

Pass the kleenex box when you are done with it, please.

Thank you for this post! It was great. But to make your life easier, all you would have needed is a bunny or a squirrel to run up the stairs, fire would have been up the steps before he even realized he had done it! ;>)

I love your doggie!!! I have cats but I love dogs.

Great post by the way. Cath, hand me the kleenex!

Fr. V ~ There's a reason I don't allow bunnies and squirrels to run around my house. Oy, vey! What a catastrophe that would be! :-)

Terry ~ You'd love my dogs, both of them.