God is your Father, Mary is your Mother

Today is my Dad's birthday.

He died in 1995, but if he were still alive, I'd be calling him today to see how he is. To tell him how I am. To talk about...things. If he lived close by, we'd take him out for dinner or something. And Dad would tell stories.


I think I get that ability from him.

Dad was a gentle soul, loved others unconditionally, likely from the suffering he experienced in his own life. It seemed his lot to always be reaching out to others in some way. He was always smiling, always joking, but I think that when it came to his true pain, he hid it from the world.


I'm just like him, in so many ways, and more and more I have come to see it.


I miss him a lot. The last time I saw him was at my high school graduation. At the time he was living in another state, with my grandmother, keeping her company as grandpa had died several years before. So it was that in Jr. High and High School I hadn't seen Dad a lot; we spoke on the phone, we saw him occasionally, on holidays. And as the years went on, this happened less and less. There is more to the story, but it's something I'm not ready to discuss, and may never do so on my blog.


His death was shocking only in that death is ALWAYS shocking in the void that it leaves, and the grief and sense of guilt that sometimes (maybe often) takes its place. We expected something, but when it happened...well...it still hurts.


Dad died of hepatic and renal failure, acute onset. His last words were the name of the hospital: St. Francis.


Dad was Lutheran, but I am comforted by the idea that his last words were the name of a beloved Saint, one who would have known and understood Dad's true poverty and may very well have been with him then as as he left this world later that day.


I've been praying for Dad all day, missing him, wondering how he is. I don't know what his beliefs were at that time; Lutheran in name, but Mom feared he was an atheist by then, although the evidence we found was that he believed in God and knew he was dying...and may well have been ready. In hope, I continue to pray for him.

Growing up was hard. My parents divorced when I was only eight, and shortly after that, Mom was diagnosed with Bipolar...after she had a psychotic episode. When we moved to Minnesota to be closer to her family, nothing was fixed although the family was helpful on many occasions. Dad moved up here a few years later, and again...nothing was fixed. They weren't married. Mom wasn't even coherent a lot of the time, and Dad...well, Dad was just absent from our lives except for weekends, and even then, he was absent.

A few years ago I was speaking with a priest about the difficulties I was having with my mother...as you might guess, our relationship hasn't been perfect. I wanted it to be, but it simply wasn't there. I still look at my friends and witness their FRIENDSHIPS with their mothers and wonder how that happened for them? I know the answer, theoretically. That evening, the priest said to me, "God is your Father, and Mary is your Mother."


I think he was actually at a loss as to how to respond to my predicament, but in those words, he gave me my answer, and I have grasped that phrase as I would a lifejacket if I were drowning.


Over time, I've greatly worked on my relationship with Mary, and indeed, things between my mother and I are so much better than they were, and improving constantly. In school, especially, I've come face to face with God in the Old Testament, and His constancy through the New Testament...and even God as my Father has become more understandable to me.


Our families reveal to us the face of God, and if our families are dysfunctional, we often form our knowledge of God on the basis of such corrupted experiences. So it was that, being told to direct my focus from what was so wrong, to what was absolute Truth personified was the perfect advice to begin to heal the rift that has covered so many years.


Today yet another piece fell into place, something I've never considered.


This evening I went to Mass, and while praying for my Dad, missing him, wondering about him, Jesus said to me, "I lost my earthly father, too."

If I'd been walking, that revelation would have stopped me in my tracks.

We often think about Jesus and His Mother...but we don't think of Joseph. We often speak of Jesus' grief when his dear friend Lazarus died, but because it isn't recorded in scripture, we don't consider his grief when St. Joseph passed away. We speak of a "Happy Death" in reference to St. Joseph, as he would have had Jesus and Mary at his side, but we don't consider how Our Savior, in His humanity, would have suffered such grief as His earthly protector and father paid the price of original sin in his death.

Jesus was raised by Joseph and Mary. He would have learned everything about being a man from his earthly father. He was a carpenter; just like Joseph, as Jesus took on his father's trade like every other boy did at that time.


Of COURSE Jesus grieved when Joseph died, more deeply than anyone has ever grieved for their parents. For Jesus had the full understanding of WHY he died, and loved Joseph with the perfect love not only of a son...but of the Father Himself.

I realized today that even as I will forever grieve the death of my father, Jesus is present with me there, and welcomes me, and all of us, into His own grief. We are united in this sense of loss that arises out of love. Where there is no love, there is no grief, and so even in what we consider to be "everyday" suffering, we are still participants in the love and suffering of Christ.

Indeed...there can be no love without suffering..and no suffering without love.


I miss my Dad because I loved him, and still do. No matter what happened in our lives, there was always love, and that's the only thing that matters. 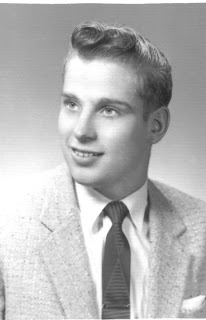 Dad, I love you. Rest in Peace.

Wow, that was beautiful. A few days before my grandmother passed away she had a dream that she died and that Jesus and Mary took her by the hand. I never considered that this is the literal truth of the “happy death” of St. Joseph.

OH! Adoro - thank you! It was the anniversary of my dad's death on the 11th and I am still so discombobulated by the whole thing even though it happened 13 years ago. My father and I had a weird relationship - I am very much like him but we often butted heads. When you wrote that Jesus grieved for St. Joseph somehow it made me understand it all better. Don't ask me how - I can't even put it into words but all of a sudden something in my soul went "yes!"

Thanks for this Adoro (having lost my Dad recently.) Someone wrote to me today asking for something to read about losing your Dad - well - here is yet another God thing no?

CK ~ How cool you DREAMED about the Happy Death!

Angela ~ It's difficult, isn't it? And with 2 anniversaries each year...the day of birth and day of death, it's a reminder. But we know we can pray for them!

Fr. V. ~ I was thinking about you when I wrote this, having so recently lost your dad. It's always a God thing when Jesus is around to point out these obvious things we never think about...

Adoro: I don't know how I missed this post. I will pray for your Dad. I see a resemblance to his lovely daughter around the eyes.