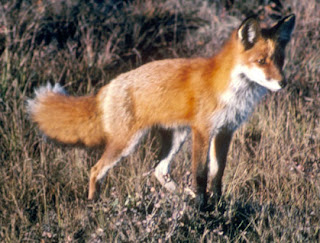 The Fox and the Hound
The other morning, around 6 am or so, I was walking my dog before work. As we approached the woods on the other side of the park, a dog-like creature came out from the underbrush and trotted along the treeline. He saw us and stopped immediately, his ears forward, eyes bright. He even took a couple steps towards us, likely interested in my dog who was regarding him in much the same manner as we advanced upon his position.

I realized that the creature was a fox, his red coat and bushy tail even brighter than I'd imagined it would be; I'd never seen a red fox in the wild before. They are rare, elusive animals that prefer to remain undetected on the fringes, and take in the world around them carefully before responding.

This little guy had courage; I did not get a sense that he was a bit fearful of us, although it's unlikely that many have seen him. A year or so ago I heard rumors of a coyote in the area, which may be true, for they are everywhere, but it's more likely they saw this fox in his silver phase; I caught him in his red phase, and what beauty!

We continued our walk, and when he was uncomfortable with our trajectory he darted back into the safety of the thicket along the creek, but not without another glance back at us.

Some people prefer to remain on the fringes. They read the blogs, and they enjoy what they read, but find that it's much more to their amusement and satisfaction to read and only occasionally comment. Sometimes they comment in the form of emails only, sometimes publicly in the comboxes. But they don't have blogs of their own, because they would prefer to take in the world around them, observe, and provide their wisdom when it is needed or called.

Many people don't even know such readers are there, for they are so elusive, and perhaps, when glimpsed, they are mistaken as other bloggers or something. Thus, legends develop.

And every so often, one of these comes out of the shadows and starts his own blog....

And I've been thinking along IT'S ABOUT DARN TIME!

So all y'alls, hightail it on over to Uncle Jim's place, and you'll find him to be a very hospitable host and he tells his stories and seeks your own, all revolving around Second Chances. See you there!
Posted by Adoro at Monday, September 24, 2007

A lurker?
Not a lot ... I like commenting, too.
But do my own thing?
Write my own Blog?
I doubt it.
Don't have it in me.
There are too many other good bloggers out there.
Just think - less than a year and a half ago I didn't even know what a blog was.
Now I got one.
Thanks, Adoro, for the plug.
You and Fr V and Robert Going and Dawn Eden have been my mentors.
I hope I don't disgrace you.

I work with a Boy Scout Troop.
They have a storage shed out behind the sponsoring organization's building.
For the last 3 years in a row, we've had a mama red fox give birth to pups under the shed and stay there while she weened them and taught them how to be foxes in the soy bean field behind the shed. There's a creek runs across the field a couple of hundred yards back and some wooded areas nearby. I guess it might be an ideal home for them.

The scouts have always been careful while getting gear out of the shed and storing gear to try not to disturb the family under the floor boards.

When we see them, they are as you describe ... incredibly beautiful.

Completely off topic, but I wanted to let you know that you're a Mathete!.

Adoro, thanks for the heads-up. I will be sure to check out Second Chances! Your story about the fox reminded me of Nickel Creek's "The Fox Went Out on a Windy Night"

Uncle Jim ~ a lurker? No. Because as I indicated, you comment here or there. That's a MUCH higher status than "a lurker" (not to be confused with the term "troll")

I wondered if the fox was actually a red coyote, because he seemed rather large for a fox. So I looked up pictures and it was indeed a fox...even the red coyote doesn't burn so brightly as the red fox. There was no mistaking him!

I've always loved foxes, ever since "the Fox and the Hound".


Melody ~ I LOVE that song!