The Betrayal of Christ 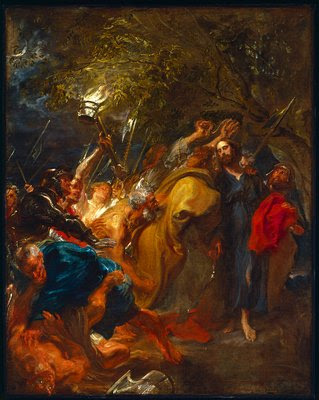 My senior year of High School (public school), I took a Humanities elective and found it to be one of the best classes I ever took! We discussed philosophy, mythology, architecture, theatre, and art.

We were fortunate enough to take a field trip to the Minneapolis Institute of Arts, all having recieved a specific assignment, prepared in advance, to discuss at the museum. So in short, we all had the opportunity to play "Docent for a moment".

My assignment was "The Betrayal of Christ" by Flemish artist, Anthony van Dyck.

I remember that although I liked the Baroque style, this particular painting did not GRAB me as others did, so I was disappointed. I was a bit more attracted to the Baroque style of artists such as Caravaggio, Iliya, Rembrandt, and others. I really liked the Flemish artists in general, but this particular painting just didn't seem to fit my "image" of what I wanted them to be.

But I was a good student, so I studied the work and tried to make it interesting to others, as well. And the more I learned, the more I appreciated the painting, even though it wasn't really to my particular taste.

Yet, as I've gotten older, this painting has "haunted" me to a certain extent, for the information I learned for my presentation remained with me and I have often put it to the test as I looked at paintings from a cross-section of styles and centuries.

One of the lessons, first and foremost, was in the colors used. Take a good look at this painting; notice how the color yellow is front and center, and in some ways, completely overshadows everything else. There's a reason for that; yellow is the color of betrayal.

There is no doubt in anyone's mind who the betrayer is in this painting; Judas announces his presence like the revolving cherries on a squad car.

Betrayal is the central theme, and everything else points to it...and yet, we still find a cool center of acceptance, that being Jesus, the Lamb of God, standing upright. Notice that Jesus is the ONLY upright figure in the painting, a center in the storm, and actually leans INTO Judas as he betrays Him. Jesus is clad in royal blue, the symbolism of his status and identity being obvious.

Look also at the other figure clad in blue; Peter, who is in the act of cutting off the ear of the slave of the High Priest. Peter, the rock; to whom the keys of the kingdom of heaven were given. And see how his robes shimmer; for as Jesus is diminishing into the humiliation he is to undergo in such submission, Peter will take the forefront on earth and lead the Church. Such irony For at that time, Peter did not realize what he had been given and his actions were to defend his Lord, whom he would betray three times that very night. Peter did not know who he was or the role he was called to fulfill, and that in order to step into this role, his Savior had to be betrayed. And so the act of betrayal itself takes place behind his back as he focuses on the immediate, in typical Simon-Peter style, completely missing the point.

As an aside; I am certain Peter is one of my closest patrons.

We have to look to the rest of the painting as well, for it is all focused on the most imporant action, that of the kiss of betrayal. The cowardly, deceitful, betraying yellow, and Christ, in his calm blue of acceptance, framed on one side by the attack and on the other, the red to symbolize his Passion, the blood yet to be shed. For love never comes without a cost, without a ransom of blood.

And yet He stands, the cool center, accepting the onslaught of the soldiers, the torch waving towards him, the tree branch arching overhead, the foot of the downed slave pointing to His betrayer, the diagonal lines all pointing towards this pivotal moment.

And, as I learned, as typical in Baroque art, the right lower corner of the painting is left bare; so to invite we, the viewers, into it so that we can better contemplate the image up close and personal. Another characteristic of this style was the inherent drama; the main drama (Judas kissing Jesus in the act of betrayal) is triangulated by Peter and Malchus, the slave, and the Roman Soldiers leaning inward for the arrest. A fallen lantern contrasts with the torch above to create the lighting for the scene, again highlighting the drama of light and shadow which so emphasizes the action taking place before our very eyes. We can almost hear the creackling of the flames, the breaking glass of the lantern, the shouts of the soldiers, the whistle of Peter's sword, and the calm sound of Jesus asking Judas, "You would betray the Son of Man with a kiss?"

Amazing to me that I started out disappointed in this image; and now, how many years later, I have been seeking this very painting! My appreciation and understanding have grown over the years, and even though I have not maintained a study in art, my greater comprehension of theology has enhanced what little I know of art, and thus I am completely captivated by this image. Not only can I enter into the image, but I understand that I am Judas, or perhaps I am Peter, or the slave whose ear is being cut off. Or maybe I am the Roman Soldier with the torch, crying out orders to the onrush for the arrest of Jesus.

St. Ignatius, in his Spiritual Exercises, encouraged us to use our natural creativity in order to enter into contemplative prayer. He encouraged choosing a Bible verse and casting ourselves as characters in order to better enter into the scene. Take the scene of the betrayal of Christ, and "cast" yourself there, into the right lower corner where the Baroque style provides a conveniet doorway. Read this section in any or all of the Gospels, and find a painting portraying the Betrayal that invites you; prayer is not just about words and dialogue. Prayer is a conversation with God, but how can we converse with him if we have not taken the time to fully engage with His conversation with us?

Such art is a great gift to us; it can be a sacramental, that which leads us further into the mystery of Christ and His Glorious Passion. Take some time and find an image that speaks to you; if it is classic art such as this, read about it understand it, and then take it within the context of the Holy Scriptures and allow yourself to be transformed and captured within, so that you, too, may find a way to enter into the great gift of meditative and contemplative prayer.
Posted by Adoro at Friday, February 09, 2007

Adoro: Superb post! I had never seen this painting before. I thought I had when you mentioned it before but it is unfamiliar to me. You did an excellent job with the colors and the positions of the "players".

Too bad, you aren't a docent at the MIA. You'd make a fabulous Catholic art tour guide.

I took classes in Early Medieval, Renaissance and Baroque art in university and it was as much a lesson in Church history as well as art history.

Now if only I could see all those great works live instead of in textbooks ... sigh

Thanks, Cathy! I think I'm renewing my love of art again.

Nancy, thanks for stopping by!

Be careful of some of the "Church History" taught in art classes. Cathy and I went to the MIA and happened to be in the vicinity of a tour group. The Docent was discussing how the painting and artist related to Church History, and boy, did he butcher it! We both had to bite our tongues HARD to avoid speaking up to correct this guy!

I'm certain not everything gets butchered, though and I, too, have learned and am learning about Church History through art. I just check some of the details on it. :-)

Adoro: That was a wise warning.