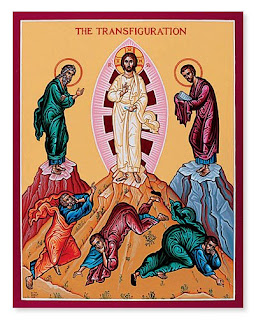 I love the Gospel readings of the Transfiguration, which, today we find in Matthew 17:1-9

Jesus took Peter, James, and his brother, John, and led them up a high mountain by themselves.And he was transfigured before them; his face shone like the sun and his clothes became white as light.

And behold, Moses and Elijah appeared to them, conversing with him.
Then Peter said to Jesus in reply, “Lord, it is good that we are here. If you wish, I will make three tents here, one for you, one for Moses, and one for Elijah.”

While he was still speaking, behold, a bright cloud cast a shadow over them, then from the cloud came a voice that said, “This is my beloved Son, with whom I am well pleased; listen to him.”

When the disciples heard this, they fell prostrate and were very much afraid.
But Jesus came and touched them, saying,“Rise, and do not be afraid.”
And when the disciples raised their eyes, they saw no one else but Jesus alone.

As they were coming down from the mountain, Jesus charged them, “Do not tell the vision to anyone until the Son of Man has been raised from the dead.”
A couple years ago when I was teaching RCIA, I had to give a reflection on the readings for the upcoming Sunday and was stricken by those that were used. In the first reading for that day, Abraham spoke with God when surrounded by complete darkness, and in the Gospel readings of the Transfiguration, God spoke out of the darkness cast by a cloud. (This image is in both Matthew and that which is found in Luke 9:28).
It would seem that it is significant that darkness descends, whether through abscence of light or through the cloud described in today's Gospel, when God has something special to teach us. So often we surround ourselves with so many distractions, many over which we have no control.
In the Gospel readings that describe the Transfiguration, Peter, James, and John are in the presence of Jesus when a cloud descends upon them. Have you ever flown through clouds? Have you ever walked in a thick fog of the early morning? It's disorienting, isn't it? One moment you can see clearly, maybe for miles, and the next moment you don't know what's in front of you, behind you, even beneath your very feet. In an airplane, you may have the sense that even though you can no longer see, you must trust that the pilot knows what he's doing. In such a dense cloud, it even stifles voices and other sounds; it can give the impression of complete abandonment.
And that's exactly what it's designed to do. That's why God uses darkness and speaks FROM that darkness or the cloud. Notice the wording in this Gospel; God didn't speak through the cloud; He spoke FROM it.
God speaks to us when we are cut off from our senses, when maybe we feel most alone; there He is most present. There, He surrounds us in a way that He can't when we are taken in by the world. But there, in the midst of that cloud, we are contained in God Himself and He speaks, directing our attention to His Son, who in turn touches us in our fear and inspires us to trust in Him; in Jesus alone. He knows what is best for us, He knows what we need and He knows that sometimes we need the most extreme fear so that it can be cast out by the perfect love that is embodied in Jesus Christ.
Just as Jesus is Transfigured before the very eyes of the Apostles, so He calls us all to follow Him in trust, and be transformed. Perhaps we'd miss this message entirely were it not for the moments of darkness that force us to hone in on the one important thing; the voice of God that speaks from eternity and has called us forth from eternity to be with Him. 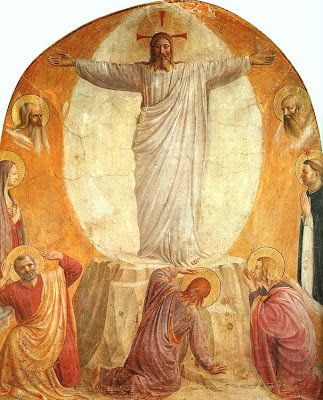 From the Office of Readings for today, August 6 (taken from a sermon on the transfiguration of the Lordy by Anastasius of Sinai, bishop):
Let us run with confidence and joy to enter into the cloud like Moses and Elijah, or like James and John. Let us be caught up like Peter to behold he divine vision and to be transfigured by that glorious transfiguration. Let us retire from the world, stand aloof from the earth, rise above the body, detach ourselves from creatures and turn to the Creator, to whom Peter in ecstasy exclaimed: Lord, it is good for us to be here.
Amen.