Our Lady of Perpetual Help and Evangelization 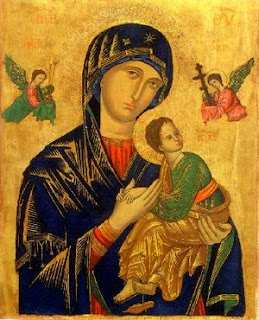 Last night a friend gave me a wonderful gift; a copy of the icon of Our Lady of Perpetual Help, purchased in Rome, and blessed by the Holy Father.

I am floored by this gift and although she likely considers it to be quite casual and not really a big deal, this gift means a great deal to me, for many reasons.

Today I set out to purchase a simple frame, thinking to just do something quick to preserve it from inadvertant damage, and then shop for the right frame at a later date. But another friend today encouraged me to at least get it matted, and then the framing will be simpler later. Agreed.

So I went to a nearby Michael's, glanced through a few matts, and realized assistance was needed. The man who assisted me commented he really liked the colors in the icon and helped me to select a few options, then recommended a double matt, which really helps to set off the image. Several worked, but I decided on blue over brushed gold, and a frame which is simple yet decorative, somewhat of a bronze color.

While we were choosing the colors and the frame, we discussed art, and I explained the history of OLPH, just briefly, the legend of her origins, and the meaning of the icon. I pointed out several things, such as how all the lines point to Jesus, how Our Lady points to Him, and about how this icon is all about the mystery of the Redemption. I pointed out some other symbols as well, and explained, in answer to some of his questions, what little I know of iconography and that it doesn't just involve images of Mary and Jesus, but Biblical depictions, Apostles, and Saints.

He was very clearly interested and I saw that he was "seeing" the icon by the end of our conversation, not just as a casual piece of art, but something that means something. He thanked me for the art lesson. :-)

As this is a blessed image, it is a sacramental, so I had determined to correctly seat and frame it permanently, so paid the money to do so today. I shouldn't have spent the money, but who knows? Perhaps one day this image will become a gift to someone else, just as it was a gift to me. Sometimes even when it costs us, it is the right thing to do to take our treasure and treat it properly so that someone else may benefit even more down the road.

So even as we conversed about the framing options, pricing, and all the details, I offered prayers that the blessing on this icon at the Holy Father's hands would carry on to this man. For those unfamiliar with our Catholic understanding of blessed objects, the wording in the blessing pronounced by the priest (or in this case, the Pope) has to do not so much with the object, but that all those who use it or gaze upon it be blessed and drawn in closer to what that image is about; Redemption. I do not know anything about this man, only that he indicated somewhat hesitantly that he is a Christian. My prayer to OLPH was that she would reach out to him and draw him inward, so I took special care to point out her eyes, and how the eyes of the icon really draw us into it, invite us into the mystery portrayed, like a window.

I had mentioned that St. Alphonsus has a shrine to OLPH, and he expressed surprise. Apparently he is familiar with the church, so I explained where the shrine can be found.

Based on the conversation we had today, it sounds like OLPH has drawn another soul closer to her so that she can lead him even closer to her Son.

I never realized the simple task of paying to have an icon framed could also become an act of evangelization. May the man and any others who looked upon this icon today be abundantly blessed and consoled by the love of God.

There is a Our Lady of Perpetual Help side altar in St. Peter's Basilica (on the same side as the Pieta). When Mom, my Aunt and I saw it, we stopped, along with my family from Poland to pray there.

The same thing happened in a small church in Venice.

I remembered that my Grandmother taught he devotion to OLPH and entrusted my Mother to Her before she came to the States.

So, in honor of Grandma and my Mother (and for the Greater Glory of God) I started the Novena yesterday. Thanks for your wonderful post on the subject

I kinda wanna see a picture of the blessed and matted icon, if that's possible.

Richie D. ~ There is just something in this icon that GRABS us and just draws us in to prayer...everywhere!

Hidden One ~ Unfortunately, although I have an old digital camera, I can't find the cord which would allow me to upload the photo, so I can't aquiesce to your request, although I'd dearly love to!

It is the same icon I have above, a copy of that original, and that is really the main point.

If you want to send me a picture of your OLPH ,I would be happy to put it on the 'net on a full size web-page.

E-mail me for my home address
rz@rozi.com

Thanks for the link.

But because I have no way to upload the picture, I can't post it or e-mail it. If I remember to get a disposable camera again, I can take a picture, get it developed, and scan it in (I have a scanner), then I'll post it here on my blog.

In all honesty, Adoro, what really caught my eye was, "the wording in the blessing pronounced by the priest (or in this case, the Pope) has to do not so much with the object, but that all those who use it or ,gaze upon it be blessed and drawn in closer to what that image is about; Redemption." [emphasis added.] I figure a picture of a JP2-blessed icon is about as close as I'm going to get to gazing on a real one.

Sincerely in Christ,
Hidden One

LOL, Hidden one...you're goign to have to keep looking for a JP2 blessed icon.

This one is blessed by Pope Benedict XVI! :-)