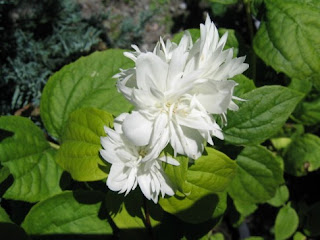 I hate spiders. Hate them. Fear them. They are vile, nasty creatures that encroach on my comfort and safety. Yeah, they eat flies...and I will tolerate them as long as they stay out of sight.

Unfortunately, though, I was in for a surprise when I moved into my my new home. The Snowflake bushes outside my front door play host to an especially terrifying species of vile creature; funnel-weavers.

Yup. Not to be mistaken with the deadly Australian and desert funnel-weaving spiders, these things are common to Minnesota and are likely grass spiders. And they are as creepy as all get-out.

Did you see the article today or yesterday about the sheet-web spiders that grouped together in Texas to do their utomst to creep out Texans and tourists? I think they may have recently watched "Arachnophobia" and decided to copy the idea. They are taking over the world now.

Entymologists are fascinated. Note to self: never marry an entymologist.

Anyway, I've always loathed spiders. Maybe it wouldn't be so bad, but when I was little my brother used to throw Daddy-long-legs at me. Wasn't he sweet? And I'd scream and scream...and get in trouble for screaming while my brother looked up at an angry and irritated Mom with a perfectly angelic expression and explain he had NO IDEA why I was screaming, but I wouldn't stop and he was getting irritated, too.

Yup. Thanks to my brother, I became known as a "screamer" and instead of anyone ever coming to my aid, they assumed I was screaming for no reason. Because, of course, my brother would remove the spiders from the vicinity if they could still be seen, in order to make sure all the evidence had been taken away.

Yeah, Mom did finally figure out what my wonderful big brother was doing...but the damage was already done.

Fast forward to my new townhome. For the first couple years, I lived in holy terror of the bushes. They were COVERED in funnel webs and sheet webs, spiders entered my house through microscopic cracks and I considered purchasing a S&W .45 semi-auto and staking out the doorway in order to blow every creeping spider into oblivion. Or purchase a blow-torch. Or Aqua-Net and a lighter.

Every morning as I stepped outside with the dogs, I feared walking into a web that covered the doorway. As it was, they covered the doorbell and made the bushes look like a horror-movie version of cotton-candy. Vanilla flavored. I idly wondered if I sprayed the bushes with food coloring, could I SELL the webs as a fair treat?

Spiders on a stick. 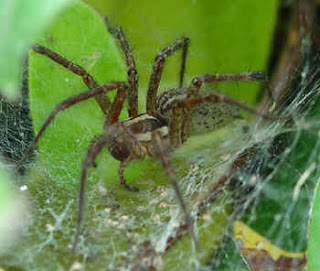 One morning I came home with the dogs and had to tie up the German Shepherd as it was somewhat muddy out and I needed to wipe off her paws before I brought her in. So I completed this act and as I brought her in, I saw that a piece of mud clung to my docker's. As I reached down to brush it off...it moved.

I screamed, jumped, shook my pant leg, and finally the monster spider let go and began to crawl away.

I think there's a Bible verse in Deuteronomy that discusses this? "Never suffer a spider to live." (If it's not there, it should be. Where were you on THAT edit job, Martin Luther and John Calvin? I mean, if you're going to edit to take out references to praying for the souls of the dead, and changing the language to enforce your own man-made doctrine of Sola Scriptura, why not advocate killing spiders? At least that change would have been useful!)

So I stomped on the monster spider several times before it finally died, all the while chanting, "DIE! DIE! DIE! WHY WON'T YOU DIE!?"

That's when I realized I had a problem. There was a need for a twelve-step program to handle this spider problem.

Yup. You guessed it. I went to Home Depot and bought Ortho-X, Maximum strength, and I spray the bushes every month, even in the winter. 12 months. That way I'm sure to prevent even the hatchlings from settling in such unwelcome territory.

Last summer was the first time I tried the stuff. It works as a barrier, actually repelling spiders. I spray around the window frames, both inside and out, the door threshold, and other areas likely to be inhabited or used as an entrance to my house. The bushes themselves, as super-host to these things, also gets sprayed.

And last summer, one evening as I sat at my computer, I heard a strange noise. I cocked my head, trying to remember what that sound represented. Finally it came to me: CRICKETS!

I had crickets in the bushes!

Some people are annoyed by crickets, but not me. Ever since I learned about them in an Ecology class in a summer program through my elementary school, I have liked crickets. And for the first time, I realized that I'd NEVER heard a cricket near my townhome before...because of the predators that had inhabited the bush, set to ensnare any creature that came along.

To me, the sound of crickets was like music, ensuring me that the spiders were no longer in abundance, and no longer waited for my appearance, the better to spring upon me to terrify me as demons straight from hell.

I'm certain that spiders are Satan's minions. Scorpions, too...ask Jennifer F. about that.

So now I use the stuff every year, and the appearance of even ONE of these things causes me to pull it out again. The container says that once-yearly is necessary, but I've decided that sometimes the rain washes the barrier away. So I spray again and again if there is evidence.

Ironically, I don't so much mind the Daddy-long-legs that appear on my screens, because they're not actually spiders, nor are they poisonous, contrary to popular mythology. I still can't stand them, but I'll at least let them live...most of the time, and as long as they remain outdoors. I think they used to be prey to the grass spiders, too, so there is a sense of solidarity with them.

A couple years ago I was speaking to one of our priests in the sacristy as he took his chausable off after Mass. There was a box-elder-bug crawling on him, and I told him. He couldn't find it so I reached out and plucked the little bug from his sleeve. He commented, "St. Francis would be proud of you."

Yeah, sure...but if that had been a spider I would have been OUT OF THERE so quick Father would not have seen me leave, and I'd be 6 blocks away before he realized I was gone.

St. Francis I know about.

St. Frances I don't. Tell me about her.

One of the papers I hope to do over the next few years is an entomology one;-) I will be sure to fill you in on my blog as it happens;-)

Uncle Jim ~ LOL! I will have to correct the spelling...or maybe I won't.

It seems that St. Frances has a story to tell:

What an incredible story. Could she be one of my "unknown Saints"?

I love her prayer:

kiwi ~ I hope you realize that means I will never marry you.

OK, I'm interested anyway in what info you provide. Even though I can't stand spiders...I'm still fascinated by them. I've always been fascinated by things that terrify me. Makes no sense.

Hmmm... you stomp spiders, and here, the last one I found in my room, at roughly 1 or 2 in the morning... I spent about 10 minutes getting a water bottle, capturing it, and putting it in the garage. then again, I am the sort of person who finds that a mosquito biting me presents a moral dilemma. I couldn't hurt a fly. :P

Anyway, LOL! It's perhaps a good thing you quit being a cop. Any perp could escape by just throwing a big spider at you! You'd probably end up shooting Spiderman.

I hope they spray the office at your new job before you start, in addition to nailing the chairs down.

Aren't you glad I'm your friend, who else bugs you so bad! Bugs-get it, get it.

Also, a word of warning: be very careful about praying for God to help you with your fear of spiders! I used to be a huge arachnophobe...and then my house was overrun by scorpions. I am no longer too afraid of spiders. :)

cathy ~ Actually, I was a great shot...if he threw a spider at me, it would have been: One to the spider....one to the head.

Use of a spider is deadly force when one is an arachnophobe. I'm certain that in our relativistic society I could argue that defense, because, of course, it's totally relativistic with regard to how I FEEL about spiders. I'm certain, as long as I don't bring up my religion, the ACLU would defend my right, as an arachnophobe, to kill anyone who threw a spider at me, as such an act would clearly fit within the tier of "deadly force", which in MN statutes is Stat. 609.066. Look it up. A good attorney could make such a defense work. Especially if they worked for the ACLU, because they are all about paying off judges, anyway...how else do you explain their success?


Jen F. ~ Is that monster web anywhere near you? I hope not. Sorry you're a fellow arachnophobe...and really sorry scorpions are overrunning your house.

If you move to MN, we're generally in good shape here.

Or you could try Juneau, Alaska. It's not so hot there, it's darker there in general, but they don't have black widows, brown recluses, centipedes, or scorpions. There are no roads in or out...and no tarantuals.

All disgusting crawly things such as spiders, scorpions, tarantulas, and snakes are the spawn and minions of satan and therefore one is morally obliged to destroy them on sight! There is no word strong enough to describe my hatred of them. Oh, and did I mention I'm a six foot 220 pound guy?