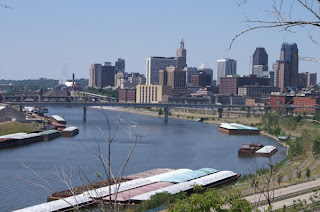 I just found this article on KSTP.com, and it just confirms what I already sensed....every damn time I crossed that bridge, which, by the way, was several times per week in a typical week. I had no basis for my sense of unrest, but for the last several years of having to cross it to get to St. Paul Impound, I always felt queasy. I could not keep my thoughts from wandering into the "what if it collapses?" scenario. So, you see, the only surprise I truely felt at the I-35 W collapse was the fact that it was that bridge that went, and not the Laffayette Bridge in St. Paul. To be clear, the I-35 W bridge also gave me the heebie-jeebies, but not to the degree the St. Paul bridge did. Thankfully I'm no longer in that job, and I live on the far side of the Metro area from it....but if life takes me in that direction, I'll find alternative routes, even if it involves swimming the Mississippi.

ST. PAUL (AP) - A heavily-traveled bridge over the Mississippi River in St. Paul has raised some of the same safety concerns as the interstate bridge that collapsed in Minneapolis, and isn't slated for replacement until 2011.

Like the collapsed bridge, the Lafayette Bridge - which carries Highway 52 over the river just east of downtown St. Paul - is considered structurally deficient, with a sufficiency rating just under what the I-35W span was rated. Also like that bridge, the Lafayette is "fracture-critical," meaning that if one part fails the whole bridge could fail.

The Lafayette carries 81,000 vehicles a day, making it the state's most-traveled bridge with troubles similar to the I-35W bridge. Its history includes a temporary shutdown in 1975, less than a decade after its 1968 opening, when a crack was discovered that was described at the time as large enough to put your arm into.

That fracture in the southbound lane nearly resulted "in (the) collapse of the bridge," according to a 2006 inspection report. The damaged component was jacked back into place and reinforced with bolted plates, the report said.

"That's a bridge we've been watching for a number of years," said Department of Transportation spokesman Kent Barnard. He added that its condition is "nothing ominous, nothing threatening."

Barnard said he drives across the bridge two to three times a week and doesn't worry about it.

But Mike Legato does worry about it. The St. Paul construction worker says there are times, especially if traffic is heavy and cars are bumper to bumper, that he can feel the bridge rattle and shake on his daily commute.

"When you're stopped, you really feel it," he said.

Khani Sahebjam, an engineer for the Metropolitan District of the state Department of Transportation, said he knew of no plans to accelerate the timetable for reconstruction. But he acknowledged that priorities could change.

"Of course it's all tied to possible future funding," Sahebjam said. "Right now, with this situation, the focus is on bridges, so maybe bridges will be done sooner."

Bridges do vibrate and are designed to do so, Sahebjam said.

St. Paul City Engineer John Maczko said he hopes the I-35W collapse will result in a quicker replacement for the Lafayette Bridge.

"I would think that this has shaken them (MnDOT) to the bone," Maczko said.
Posted by Adoro at Wednesday, August 08, 2007

I have been on that bridge - stopped in traffic, and felt the bounce when all the trucks in oncoming trffic past by.

I have taken that bridge a lot and though it looked find from the driver's side view.

It looks pretty flimsy from your photo. I may have to start taking the Robert or Wabasha Street bridges.

Thank you Dear Lord for moving me to southern Minnesota! I must admit I've traveled all those bridges when I lived in "The Cities" which was most of my life BTW - and I never felt queasy, uneasy, or the least bit scared on them. I am one of those unfortunates who goes around blissfully secure and rather ignorant of these dangers. I also gleefully ride on every amusement park ride with no thought to any danger.

I am a poor ignorant soul, please pray for me. I admire the cautiousness of others.

I've never liked bridges. The ones that freak me out are the old railroad bridges that still carry trains. Don't know how often or not they are inspected, but with all the cut-backs in that industry...hmmmm. Not to cause any more uneasiness, though!

Ray ~ I-35W looked fine from the driver's window, too. They don't fail on top...they fail in the structure we can't see while we're driving along.

Sanctus ~ I like roller coasters, too, although I haven't been on one in years.

Swissmiss ~ Another thing to avoid...trains! LOL