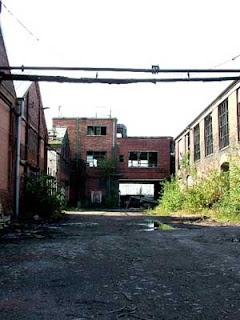 I had the weirdest dream last night...and this morning.

Trying to save money, I didn't have my AC on to try to keep the humidity out, so as such, my fan was blowing in the window, I was damp and uncomfortable all night, and that condition always leads to fretful sleep, and when sleep does finally occurr, vivid dreams.

Last night was a night of my own personal mini-series. It may actually lead to a short story, but first I have to figure out the subplot.

In the beginning, I was a with a group of friends reminiscent of my college buddies, a mixture of men and women. And they definitely had distinct personalities, unlike most canned dreams that just rehash things.

We were going to take an evening tour of the ruins of some type of factory, perhaps a steel mill. As we approached the darkened, forboding structure, I remember thinking, or maybe commenting, that the setting along the river would make a great horror story, perhaps along the lines of "Rose Red" by Stephen King.

As the light lessened, we spent time wandering the hallways and workfloors of the sheet-metal structure, having to avoid dangerous obstacles; of the type one finds in such urban decay; broken glass, bits of torn metal with deeply rusted edges, unstable floors, and obstacles in places that are absolutely against fire code.

But then again, this place, being a "ruin" of course defies all codes.

I'm not sure how it happened, exactly, but when we tried to leave, the gates had been locked and we had no way out. We were trapped in the ruins of this mill, and we were unprepared. We couldn't call for help; no one knew where we were, no one had a cell phone, and we had this idea that if we were caught there after hours, we'd be punished.

So we waited, watched, and explored, always trying to find a way out.

We were in luck; the next day, an elementary school came through on a tour. We didn't want to alarm anyone by our presence so we tried to stay out of the way in hopes we could follow them out. But it was not to be; we hid for too long, and once again found ourselves locked among the ruins.

We were getting desperate. What to do?

Throughout this dream, I continued to wake up, toss and turn, try to get comfortable, drink some water, and when I finally fell asleep again, I returned again to this weary dream world we could not seem to escape.

There was a room we'd commandeered as our base. Tempers were flaring; we were all uncomfortable, needed a shower, needed to get out of this hulk of metal that had ensnared us, and we were getting desperate. I remember looking around the small dark room with the light cast by my flashlight. There HAD to be an escape. We were against an outer wall...was there a vent?

I followed the ductwork and some other mysterious sheet-metal structure up the wall and saw what appeared to be a door. I talked one of the guys into reluctantly prying it, and indeed, it was a window to the outside world. The moon shone in the night-time sky...and the opening, if we could get to it, would help us all out onto the roof.

We didn't know where to go from there, so the most agile of us climbed the wall to scout it out. Indeed, this was an exit so one by one, we climbed through the rectangular opening.

In the meantime, there was a stove or a boiler of some sort in the room that was overreacting, so that added a sense of urgency. We had to get out of that room IMMEDIATELY!

I remember climbing the wall, crawling through the opening, the noise of the stove reaching a pitch I would not have though possible...and then I woke up to the relatively cool humidity of my bedroom, realizing that the fan in the window sounded suspiciously like the stove in my dream, but was inherently less threatening.

I drank some water, then went back to sleep. 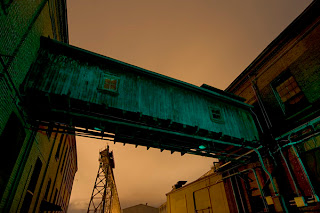 And re-entered the dream. I thought we were out! That was the end! Why were we still there?

I was getting REALLY TIRED of this dream.

We ascertained that our situation was serious, and I tried to broach the topic; how did we get here? Hadn't we escaped? I tried to get everyone to climb out through the same "window". One of the guys snapped at me, "It's not a way out."

I sensed a weird thing happening; the ruins were sucking people in. My friends no longer really seemed as though they wanted to escape. It was the Stockholm Syndrome; but instead of captors, it was the ruins that were creating the identity of the captor.

We had to get out!

The next morning, there was another school coming through. This time, one of my cohorts and I decided we had to approach an authority figure and ask for help; we could not seem to get out on our own. I had to stop to tie my shoe as my friend first approached a middle-aged teacher. She was completely rejected, and ran away from the teacher, shocked.

I knew it was up to me; for some reason, our male counterparts would not approach the humanity that had wandered into our territory. So I walked up to the teacher, pretending that it was "normal" to look as I did, to smell as I likely did, and explain as rationally as possible that we were captives of the ruins they now explored.

I introduced myself and offered my hand, smiling. She looked at me warily and began to walk away with her children. I did not address the children, none of whome seemed to really notice the oddity of someone such as myself emerging from the twisted metal and dingy shadows of the mummified factory.

As she walked away, I pleaded with her to help us, to send someone, to call the police...anything. She ignored us.

Somehow I gathered up my friends...those who could be found, and we followed the school out towards the main gate.

En route, in one of the metal corridors we found a door that had not been previously opened. It was shaped like a submarine door, and the interior was in complete darkness. I stepped inside, past the metal rivets, over the high threshold, and saw "FBI" on the sleeves of the men who stood guard. I withdrew, then realized it was too late, anyway as they glanced my way. My friends held back. I wanted to, but at this ponit, as the inquisitive one, I had no choice but to press forward.

I tentatively moved inward, and saw a couple more guys sitting in front of a laptop computer on a metal desk, reviewing some sort of incomprehensible data. They looked sligtly alarmed at my presence. I raised my hands to show I was unarmed, and began to tell our story. I repeated, "We aren't terrorists!"

They took great interest in what we had to say, and I knew, finally, we were saved. They weren't there to investigate US...they were there for another purpose.

Finally I woke up to the humid morning air and bright heat of the morning sun, tired of the constant feeling of "damp" in the house. The same rotting dampness in my dream, now enhanced as the last vestiges of the dream fell away...yet leaving the cool damp as the fan continued to blow in the window.
Posted by Adoro at Tuesday, August 14, 2007

Interesting how dreams pull us in...and how things 'morph' from being 'x' into becoming 'y' - at least in my dreams that happens.

I wonder if you will ever get out - or will the FBI arrest all of you. Do you think you'll ever return to this dream and see it through to conclusion?

Quite the dream. To not remember dreams can indeed be a tender mercy.

O MY GOSH! This is so telling about you - your leaving your job, etc.!

uncle jim ~ I hope not. I was really sick of that factory!

hidden one ~ I'm always fascinated by dreams I can remember...well, some of them. Some are so boring I wish I could forget. This one at least had a plot of some sort and even a hint of a subplot.

terry ~ Not really that telling, although, come to think of it....that might have been my group of friends in the dream...my coworkers! LOL! They're all still there!

Guess I'm just used to all of my dreams being either wonderfully disappointing after I wake up (they are few) or nightmares (they are not).

I would analyze it for you but you would reject it. You will have similar dreams after this one, and you will see.