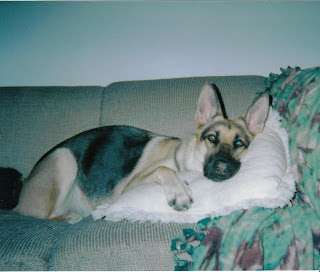 Guess who's taking a trip to the Vet NOW?

Yup. We're making a trip to the vet this morning. I took my German Shepherd to the dog park a couple times this week, and yesterday there were LOTS of dogs to play with. She did a great job, fell in love with a boxer and proceeded to "herd" him all over the park. She even got jealous when another dog started playing with the boxer and began vocalizing at him. A good time was had by all.

Last night, she was exhausted, and I think she's STILL tired this morning. And because we're (finally!) supposed to get some significant rain, I was going to take her out there to play again this morning, because it will be days before the mud about to be created dries out.

But we have a problem, so there will be no play time. And no long walk in the nice cool air.

This morning she was licking her paw and seemed to be pulling something off of it, as though she had stepped in gum or something. So I got a flashlight so I could take a closer look, and the large pad on both of her front paws is abraded, that entire outer layer of tough pad is worn away. On the other paw, it's flapping. She's not bleeding, but she is clearly in pain. And this is something that needs SOME KIND of attention, although I'm not sure what to do about it.

I searched the 'net trying to find a useful veterinary article, but they all address different types of injuries, involving cuts through the pad. Nothing like this. So I called the clinic, knowing that pad injuries can become serious quickly given the use they take by necessity. And as you all know...I can't afford an expensive infection. And quite honestly, I think if I just let this go it would get worse and then we would be dealing with a REAL problem. I guess I'd rather pay the fee to have her looked at than wait. If it does go all the way through the pad, a general anesthesia is typically needed to fix it and I don't WANT to know that cost!

So this morning in a couple hours, we're heading off to the vet. I don't want to go there, and really, she doesn't either. But we will do what's necessary. Because...well, it's necessary. 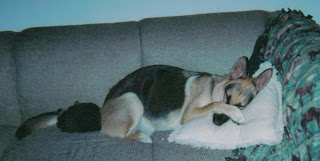 UPDATE: It was worth the cost of the vet visit, which was minimal. She cut the flapping piece of skin that could have torn had we left it untended. And for now, we just have to avoid pavement and other abrasive surfaces. So the dog park is out for now, which is fine, because now it's all muddy, and we're entering a rainy stretch of weather. But in any case the abrasion did not go all the way through and what she has left of her pad should heal with no problem.

I tried little fleece booties on her today. She walked funny, but after a short while didn't have a problem with them. So we'll be taking our walks with "protected" front paws for the next few days. And no, I don't care how dumb it looks. I'm more interested in avoiding other vet bills by ensuring the pad won't wear through to the flesh!

She's curled up on the dog bed near me right now. You've never seen such a cute Shepherd!
Posted by Adoro at Saturday, August 18, 2007

I hope they heal her soon. We used "Bag Balm" for Jake's feet during the winter when they get all cracked.
Hope her recovery is a speedy one.
(Injured for love...)

I've used "Bag Balm", too, for cracks, and maybe they'll recommend it for this, too. If so...I'm ready. But it will likely need to be bandaged or it will wear through. And I KNOW that would hurt horribly and lead to serious infection!

Get well soon, Tikaani. I hope it will be easily taken care of. That picture of her with her paw over her face is so cute!

I suggest Ozonol (human stuff) or some other topical disinfectant, and a gauze wrap to keep it out of chewing range.

Ok, stop it with the vet visits! Yikes. Poor sweetie. Tikanni is cute. I hope she, and Mom, recover soon.

adoro:
She is so sweet, love the pictures.

What a lovely doggie -- and so sorry about the paws. I wish both of you a speedy recovery!

I have a shep too, and she cuts her pads all the time. I took her to the vet over it once and they said it was no big deal. So I put neosporin on it when they get cut and wash them and leave it at that. If you have any words of wisdom beyond this I'd be 'all ears'. B