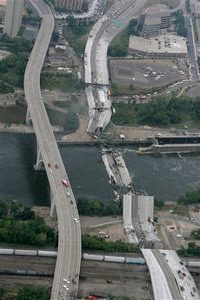 I went to work today, wondering if any of my co-workers were on the bridge. Wondering about my Manager, but thinking he took a different route home.

As it turned out, he was nearly one of the souls on the bridge; he revealed this morning that he is still in shock. Last night, he was on I-35 W, which, north of the bridge, has been under construction for some time. The bridge itself, which is 8 lanes wide, was down to 1 lane on each side. (One week ago, when I was last on this bridge, it was 2 lanes on each side). So as you can imagine, with a major highway, the main thoroughfare through the Minneapolis downtown area, so crippled, well, traffic was HORRENDOUS, and was literally bumper to bumper for miles, and traffic was just crawling.

There are a few exits approaching the bridge, the last one being the 4th St/University exit, coming from the North. My manager was fed up with traffic, was on the phone with his wife, and, there, about a quarter to 6, he told her that he was going to go around it. She chided him, telling him not to go on one of his "expeditions", but he ignored her, being a typical man and needing to explore and find his own way (see TOB to understand this mentality), and took the 4th St. Exit. He found another bridge and crossed through downtown, then re-entered 35W from the next exit down, a few miles along in South Minneapolis.

By then, the bridge had collapsed.

He is convinced he would have been on the bridge, given the way the traffic was crawling, given the timing of it...and is thrilled to be alive. And sorry, all you women out there...thrilled he didn't listen to his wife.

This is a huge tragedy, and the repurcussions are NOT going to stop with Minneapolis. Already, States everywhere are assessing their bridges.

Many years ago, when I was a child, I was terrified of the bridges with the large metal support structures over them. When I saw them as we approached, it looked like scaffolding to me, and scaffolding meant that something wasn't finished being built, yet.

I don't know from whence my fear came, but whenever we took trips somewhere, invariably we would have to cross one of these bridges. And the surface, the strange sound the tires made on these particular types of bridges, terrified me even further; it was like nails on a chalkboard, to my sensitive disposition. And so when we were approaching this structure, I would scream and scream and scream, certain Dad was driving us into disaster. I literally could not control my screaming; it was terrifying to me, so eventually my family just gave me a pillow to scream into, and I agreed...what did it matter, when we were all going to plunge into the river we were crossing?

And the moment we crossed, my screams stopped, and I was fine. I did this for years, and I can't tell you when it stopped. I even remember, after I had learned how to read, coming across a magazine or newspaper article discussing a bridge collapse. In it, the author discussed how the collapse had affected people in the area, such that, even though they had not been on or near it, when it was rebuilt, or when crossing any other existing bridge, people had to drive them across. They could not do it themselves. They could rationalize, they could look at it and see that it was safe, but they were so terrified they could not cross. So volunteers literally stepped forward and provided the service of driving people across that bridge.

Being that this was one of my fears, the article stuck with me; I realize there were others out there fearful of the bridges, but they had a reason. I was a kid; we'd never suffered a collapse, my fear was based on misunderstanding and misinterpretation, and I did eventually outgrow it.

But yesterday, I was reminded of my fear, and realized it's not always irrational to assume a structure is dangerous and can collapse. The I-35 bridge was not a cable bridge or suspension bridge or a truss bridge, but it collapsed just the same. It was not the type of bridge that terrified me as a child.

I don't know why I suffered such fear as a child, but I do know that such fear is sometimes appropriate. My heart goes out to all who were there, all who were almost there, and all who have loved ones who have been lost or killed...and I offer my deepest sympathies and my prayers.

Please keep all those who were on the bridge in your prayers, as they deal with the ongoing trauma as a result of this horrible disaster.
Posted by Adoro at Thursday, August 02, 2007

When I was a girl, I had this terrible dream about the bridge that went from Toms River to Seaside Heights (NJ) in which it collapsed while we were driving over it. In my dream, cars continued to drive off the edge! A few months later, the bridge in Connecticut collapsed (part of I-95). I do NOT like going over bridges, especially if they are high up, at all. Fortunately, there aren't a lot of bridges in Southwest Virginia, so I haven't had to test out how the fear is after this collapse. And, oddly enough, it's really only bridges, not overpasses or interchanges.

Anyway, we are praying for everyone involved, as well.

I am praying for all those on the bridge and you as well. It is very hard to loose a pet. I think about the inevitable as I watch my golden get more gray in his face. My cousin and her husband were actually on the Mississippi river when the bridge collapsed. They watched all the emergency boats going past them. It was pretty tense till I was able to get in touch with them to make sure they were ok!

I too have an irrational fear of bridges, this didn't help things any.

I'm keeping you all in my prayers. I've said three masses with all involved as my primary intention. St. Paul/Minneaplites were always kind to me. It's truly sad that this happened in the "nice"est big city in the country.

Christine ~ I wonder if the collapse you mention is the one I read about? Do you remember the year? I do seem to remember it happened out east (I lived in IL a the time).

mj ~ Thank you. That time does come...and just thank God you get to see the gray. My Fire was only 6, didn't make 7, which would have been in September. Did your family happen to see the bridge collapse, or just the response? How awful, in any case...terrifying.

lady of the lakes ~ I wouldn't say I have a fear now, but I did as a child, no idea why. There is likely many people with this phobia...likely more so now that this nightmare from Hell has played out.

Fr. Dennis ~ On behalf of all those involved...thank you for the masses and prayers. Are you from this area, go to seminary here, have family here? What is your connection to The Cities? It is a good place, lots of good people here, and what a tragedy this is.

I'm still shocked. I think everyone is, because, really, is there anyone here who has not been over that bridge several times???

You know...I just remembered when I got my first job up here, I had to go through a process, including a psychological test and physical (medical) testing. I'd been downtown Minneapolis and went the wrong way to go to my next appointment, ended up somewhere in St. Paul on Larpenter ave. I had no idea where I was. I went into a nice-looking liquor store because it had an open door and was the only business that wasn't a fast food joint, and asked for directions to Park Nicollet in St. Louis Park. The man leaving the store told me that he was going in that general direction and could point me the right way, gave me some basic instructions and told me to follow him. So I did. He was careful to keep me right behind him, and where I had to exit, he gestured to me. I hit 35 W south, still following him, and remember following him across that bridge. I was thoroughly lost and confused, and I think he actually exited in downtown, gesturing for me to keep going. I found my way, thanks to that nice man.

And there are people like that all over MN, can be found in many locations.

So, people have been good to me, too...guess that's why I stay here and recommend it to others.

The Catholics here are especially nice. :-)

My cousin didn't see the bridge collapse just the emergency boats. They didn't know what happened till an hour later. Her mom was watching her 2 boys and was glued to the Tv till they got home cause they couldn't call to see if they were ok since all circuits were busy.

Ever since I can remember, as a little kid, I was afraid everytime my dad drove over a bridge - either fearing collaapse or driving over the edge.