I Can't Help It

I keep staring at my skis, drooling. I keep opening my closet door, staring at my boots. The next step (excuse the pun), is to don the boots and get the feel of them again.

I grew up desiring greatly to learn to ski, but all I had was a sled, and I enjoyed it immensely, let me tell you!

But when we moved to Minnesota, I learned how to cross country ski at a nearby State Park, where my uncle was the Park Ranger. (Random fact; he was present when I was sworn in 12 years later as a Police Officer in a suburb an hour to the north.)

Anyway, my favorite part was navigating the downhills. And then, happily, I had the opportunity to race Nordic in college, for I joined the Nordic (Cross Country) Ski Team, and still have the sweatshirt and photos to prove it! My favorite there in the bluffs was also the downhills, especially if there were hairy turns!

But my REAL love...ever since I first experienced the terror and the ecstasy when I was 17...was Downhill (Alpine) Skiing. That had ALWAYS been my dream, even from early childhood.

So it was. It's a long story, but I inquired one day about the Ski Patrol during the spring I completed EMT training. I learned I'd have to complete their Outdoor Emergency Care (OEC) training, which was like EMT but specific to winter conditions, and I'd have to take Hill Training to learn how to transport patients. It wasn't long before I spoke with the Patrol Director and was enrolled for Fall Classes.

They never asked me how many times I'd been downhill skiing.

As of the day I inquired, on-site at the ski area: Three times.

I'll not tell that story tonight, but suffice to say that the Patrol and Ski Instructors "adopted" me, and even though I'd started out barely able to get down a hill in one piece, I took the Hill Test that early February and passe. In an El Nino winter, with only six weeks of preparation. (That speaks a LOT more for my instructors and supporters than it does for me, but again...it's a longer story).

Not only that, but I also began racing that year, and by the end of the season I'd won my first Silver Medal and got a 4th Place medal at the State competetion. (Don't get excited...it doesn't mean as much as you think it might!)

It was all like my own personal Disney movie, but without all the cheesy music. And there were no dancing trees or talking chair lifts.

I volunteered as a Ski Patroller and continued racing for four years, and realized I had to quit for many reasons. But I loved that time, I left with hope of being able to return one day, and I long to take out the skis that grace my ski-bag and hit the slopes. I miss the camaraderie, I miss hearing the urgent call of "Ski Patrol! Ski Patrol!", and I even miss transporting patients down icy slopes.

I never minded mopping up blood from kids who had taken a failed risk, face-planted and got bloody doing so. We often sent them back out reminding them, "Hey, you just remember...!" (They would get quiet and scared at this point...) "Next time....LAND IT!"

They came in scared, maybe crying...and left laughing and enthused.

I don't think I can count the number of wrists or knees we splinted, or the record number of times the local ambulance came out to pick up what we'd hauled off the hill...or the guy who'd wandered into the shack asking for help. It usually wasn't that bad, but there are a couple that leave a bad taste in my mouth. I don't miss those.

But still, overall, it was fun, but I have to admit; we ALL did it because we loved skiing.Volunteering as a Ski Patroller "financed" our ski habit, so we could blend something relaxing with something fulfilling; it's a great combination. 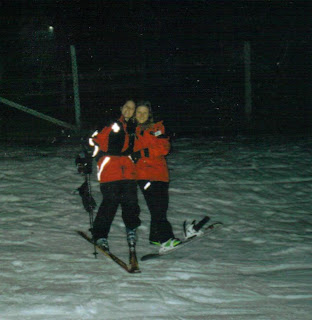 So it is, this time of year, when it's cold, when it's snowing, I feel guilty because I'm NOT heading up to the Ski Area, and I miss everything about it. My weekends were ALL ABOUT skiing. I miss my fellow Patrollers, people from all walks of life, all levels of experience, all sharing something fun and helping others while doing so.

But really, although it's selfish, I admit I really miss the pure feeling of flying down a slope, riding a thin edge, an accelerating arc, constantly going faster, but maintaining exquisit control. It cleared my mind, it calmed me down, because, in those brief moments, all I could focus upon was the present moment. Anxieties and worries could come back to me on the ski lift, but for a few moments, I was free, I was joyful, and I was happy to be alive.

Now that I'm working on my Graduate degree, I can't afford to go skiing....not the money, not the time. But for a few weeks, I'm without the same obligations. I'm considering heading up to my old ski area, and maybe if my old shift is still there, they'll let me join them for an evening. Or if not, I'd be content to ski on my own, take a day of "retreat", enjoy this very contemplative activity, and remember what it feels like to really be free...if only for a few moments in time.


I wonder if maybe the Ski Patrol will take me back one day?
*
Posted by Adoro at Tuesday, December 16, 2008

I'm sure our Lord would go skiing if He was born into the frozen tundra of MN. Celebrate the Incarnation by freezing your face off! In moderation, of course.

Father, I am absolutely convinced God is a skier! :-)

Hey if JPII could go skiing (and he did, plenty of times) you can too.

Nancy ~ I've heard that quote attributed to him as a Pope. But I don't think I've ever seen the original source...have you?

I don't know about original sources, but George Weigel did mention it in Witness to Hope.

Hmm..maybe that's where I read it, too.

Though I was never on Ski Patrol, I'm with you in the love of skiing! Used to go out to Colorado and/or the Canadian Rokies once a year . My problem right now is my knee! Looking longingly at the skis also!

Where I live, no such thing as snow, but since you are blessed to have it, I say go...though I could be in the snow in about 20 min. but I'd rather not, lol...but then again, I'm here in Ca, where we get all whiny over temperatures being below 60, hahaha.