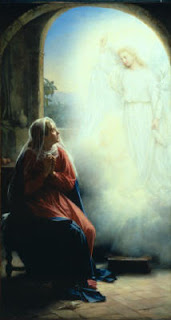 It's been a very difficult Advent for me as I've battled my own sin, my own failings, and have been often brought to the throne of Mercy in the Sacrament of Confession. I can't even call it a purification of any sort; to do so would be pretentious. There has been no victory on my part, only great recognition of my own need, and in that is abundant and undeniable Grace.

As we approach Christmas, I find myself finally entering into the joy and anticipation of the season; it's been completely absent this year.


I've often thought of the Incarnation this Advent; considering how God became man, uniting both the human and the Divine. When I look around the world, when I see the filth around us, the sin, the reality of our lives, the reality of our social decisions, and the reality of our physical and spiritual weakness, I can't help but ask, "Why would HE want to become like US?"

I would NEVER have chosen this. Ever.

Let us all be thankful that God does not think as I do. For He created us to be in union with Him; when Adam and Eve fell from grace, they started the ball in motion that has brought us to where we are today.

God did not wash His hands of us and leave us to ourselves, but loved us so much that He remained involved. God has NEVER left humanity; it is always humanity that has chosen to leave God. He looked down upon us in pity, knowing what we chose and what we didn't choose. Knowing our hearts even better than we knew our own. He punished in order to convert; and never did He spurn a repentant heart. Ever.

Finally, He fulfilled His plan, and sent His only Son. We who believe in the Trinity know that Jesus is God Himself, the second Person of the Sacred Trinity, and even though our minds cannot grasp this Truth, we accept it. Christ Himself told us, "He who sees me has seen the Father" (paraphrased).


And constantly, through my devotion to the Infant of Prague, I've constantly tried to meditate, if imperfectly, upon the Incarnation. God become man, through the most unimportant of peoples, through the downtrodden, born in a dirty cave and laid in a manger encrusted with camel spit.

Most of us were born in hospitals, or homes. Maybe even cars.

Not the Messiah. And that was only the beginning of His suffering on our behalf; for we MUST see that the wood of the manger is the same wood of the Cross, and the same wood of the tree from which Adam and Eve ate, and when we consume the Body and Blood of Christ, we partake in the New and Everlasting Covenant that has redeemed us.

Twice this week, an infant boy has been placed in my arms, and I couldn't help but consider how this tiny human being was himself a reflection of the Divine Infant. So innocent. So sweet. So perfect...and so human.

So God entered the world, to save us from our sins and bring us to eternal life. So a child has led us, even unto the Cross.


The ONLY way to Heaven is through the Cross, and if we ignore that fact, we cannot call ourselves Christian.


I recently revealed my own struggle with belief this week, and in a form of reparation, I want to share with you some thoughts that have come to me over the course of my Old Testament classes in the last two years. Maybe my own denial of God was private (not everything was in the blog post), but because I am a baptized, Confirmed Catholic, I know that it is my place to "prophesy to the nations". And so I do, in the name of Christ Himself:


I believe that Adam and Eve fell from Grace through Pride, and that the Garden of Eden was a true physical place which is now guarded by a fierce Cherubim.


I believe that Abraham is our father, and that the promise of the Lord to him has been and is being fulfilled even as we speak.


I believe that Joseph was sold into slavery, was given the keys to the kingdom, placed in position to redeem his family, and humbled in the experience.


I believe that young David killed Goliath armed with only a sling and a stone.


I believe that the 9-foot-thick walls of Jericho fell to the sounds of trumpets.


I believe that Ezekiel prophesied as directed to the valley of dry bones, and those bones rose, took on flesh and were resurrected into a great army; and that this army fortells both the Resurrection of all the dead and the reality of the Church Militant and Church Triumphant.

I believe that the Prophets were privy to the Divine counsels and prophesied not only to their own generations, but foretold the coming of the Messiah.

I believe that the Law is written on the hearts of men (as stated by Isaiah), and that those who fail to heed it are lost by choice, but are not without hope of conversion and subsequent redemption.

I believe in the Immaculate Conception, that Mary was conceived without sin.


I believe in the Virgin birth and the Incarnation of Christ.

I believe that God became man, a complete union of human and Divine, and that He had the beatific vision from His very conception and suffered all that man suffers...but without sin.


I believe that the Jesus of history and the Jesus of faith are one and the same and cannot be destroyed by bad scholarship.


I believe. In spite of myself and my own doubts, I believe.


And if I could be present at His very birth, I would prostrate myself even in the sheep dung that defines my very life, and worship Him who died that I might have eternal life.

I believe the same things. . . Or at least I think I do. It's a sad fact that too often, my actions do not fall into perfect agreement with what I claim to believe. I'm working on that.

What I find amazing is that our All-Knowing God, made man, fully knowing that he would fall from grace, and became man so that we could be saved.

It's too much for my finite mind to fathom. I start contemplating it and I begin tearing.

'Mary, did you know...' has become one of my favorite songs this season - because the more I think about the words in the song I am more humbled.

Thank you for a great post...
and yes, I believe!

I believe what the Church that Jesus instituted has always taught and what I find hard to believe or struggle to embrace fully with heart, mind, soul and strength I willingly submit my will to and seek to bring my mind into accord with. It is a hard thing to grasp and therefore to believe, this explicit infinite beauty of Incarnation and Redemption. There's nothing else worth believing so where I fail I surrender.