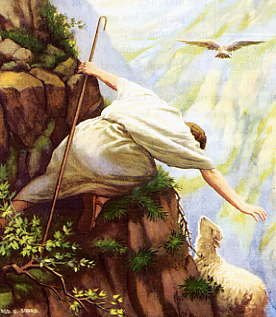 So often, I'm amazed at the pain people are carrying around. If we were to look around at Mass on any given day, and see people as God does, we'd be brought to our knees in tears on behalf of the suffering around us. We wouldn't be able to stop ourselves from reaching out to others, wanting to offer comfort, a bandage, a kind word...anything. Anything to relieve their pain.

And some would reject us, hiding their wounds. Others would finally rest, grateful to be noticed. Others would move away and point towards someone more wounded. And some would be crying out in agony, begging for help...and they have been, for years. But no one has been listening.

On any given day, I am one of those people. We all are.

And the ONLY one listening is God; He is the one one who recognizes us in the disfigurement of sin.

I look at the crucifix, and in seeing Christ, I'm amazed at His sacrifice; He was so moved by our pitiful condition that He became one of us, revealing the depths of His love in the most brutal kind of suffering and death known to mankind.

I still don't understand how God can love me that much. I can't see how I'd possibly be worthy of that kind of love. How could ANYONE sacrifice themselves for....me? In all honesty...WHY? I have no redeeming qualities. Or maybe more properly, no qualities worth redeeming. Love? What is that?

But in looking at the cross...I see love. And once I've seen it, I can't unsee it. I can't look away from the gaze of Christ, who bleeds for me, suffering in His compassion.

During my conversion, I began praying, "God, please don't give up on me...I'm trying...I'm really trying!" And I'd break down in tears, terrified of losing the salvation for which I hadn't even grasped. Even after I'd returned to my faith, I continued to pray that God would not give up on me. I'd kneel before Jesus in the Blessed Sacrament, and utter that very same prayer.

A few years ago, on the Feast of All Saints, Father gave a splendid homily, but it was one particular point that got my attention. It was as though he'd been reading my journal, although, of course he hadn't. He happened to look in the direction in which I was sitting, and, glancing up from his notes, he said, "God will NEVER give up on you!"

From that point on, I couldn't stop crying. He repeated that phrase several times, and it was almost an affirmation of the prayer I'd emitted for so many years...a repetition that God would never give up on me to correspond to the number of years I'd made that request in those exact words. Heaven echoing back through the words of my Pastor. And it was clear...he meant every word he said.

I've even heard those words in Confession, even though I've never confessed that prayer.

To this day, I STILL beg Our Lord never to give up on me. Even though I have converted, I still can't fully trust that He won't abandon me. Yes, intellectually I know Jesus is there and will never go away, will never reject me. But because I so often reject Jesus, because I let go of His hand, when I've lost sight of Him through my own fault I cry out and beg He won't leave me alone. I'm still that little child seeking independence, wandering too far away and screaming because I can't find my way back on my own.

Now, when I pray that prayer, I do so with a greater confidence, a reminder to myself that God WON'T ever give up; for every time I fear He will give up on me, He reminds me to place my trust in Him...and not to give up on myself. I have intellect and will; it is I who is fickle and abuses those gifts. God is constant. He is stalwart. He won't move. He calls...I respond. And if I don't respond, He comes looking for me and offers His hand. 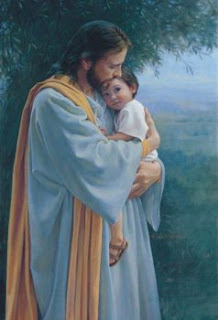 I look up from whatever shiny sin has gotten my attention, and am brought to contrition through His wounds. When I reach out and take His hand, blood pours out of his wounds, covering me. I wince and look up at Jesus, but He simply closes His hand over mine and pulls me to His side. Reconciled.

Am I really sorry? Yes. But it isn't long before the shiny bauble once again distracts me and I pull away from Our Lord...and He lets me go. Like any parent. And when it's time, He comes after me again, ever patient. He'll never give up.

"I look up from whatever shiny sin has gotten my attention, and am brought to contrition through His wounds."

Sorry to find this so late.

Maybe our prayer could be:

Lord, please don't let me give up!

Anon ~ It's not late. It's never late. God will NEVER give up, and that means it's never too late.

And yes, let us pray that together.