Vocations and the Baptism of Christ

Today we end the Christmas Season with the Baptism of Christ in the Jordan, and while we begin Ordinary Time, we also celebrate National Vocations Awareness Week.

As you know, I'm not exactly one who needs to be "made aware" of Vocations, but what I've learned in working in a parish and in general life experience is that really...the average Catholic isn't aware of much at all beyond their own sphere. Many parents are so married to the idea of grandchildren that the idea their own child might actually be called by God to something ELSE is abhorrent to them.  It is so appropriate that we celebrate this week at the same time we recognize the day of the public Fiat of Christ to his mission of Salvation...for he calls us ALL to the same thing:


Death to ourselves in order to be reborn to life in Him.

Many people ask why Christ had to be baptized for the remission of sin considering that he had no sin, and it's a great question.  We must look back to Moses, who was directed in Exodus 15:25 to cast a tree into the water to make the water sweet  and drinkable, which saved the Israelites who wandered the desert in such desolation.  Christ enters the waters of the Jordan for the same reason;  not to cleanse him of sin, but to make the waters themselves holy. In so doing, He took us all upon His shoulders. As he sank into the representation of death, he brought us with him and returned  us to life! Baptism itself, especially that of Christ, is a symbol of the Resurrection to which we are also called from our baptism!

In baptism we suffer a second death, and are born again as adopted children of God. It is there we receive our mission in life, our Call to follow the Lord, which primarily is a call to Holiness.

Some are called to marriage, to bring into being more sons and daughters of God, to spread the Kingdom of God and uphold it as members, the Mystical Body of Christ.  Within that, though, Mothers and Fathers are called to die to themselves, their own desires, in order to help their children to see not what THEY desire, but what GOD desires for their children!

It may be difficult for parents to understand that God loves their children even MORE than they do!  He knows their gifts, their innermost desires (for He planted those desires upon their hearts), He knows what will bring them true happiness...and that happiness may not match that of their parents, if they are full of their own selfish will, for the parents often project themselves onto their children in defiance of God.

Sadly, if parents are unwilling to die to themselves in terms of the Holy Vocation of their child, the child, as he or she grows, learns to also become unwilling to die to him or herself in response to God's own personal Call as well. Seeking a Vocation becomes an act of rebellion, in choosing the opposite, instead of an act of loving submission to Our Lord who wills only the good for all.

We live in a world that is not friendly to our Faith, to our values, or to our human dignity. The world does not desire the best for us, and we constantly find ourselves at odds when we seek to follow God's will in...anything.Thus, if we do not have the support of our families, we find it that much harder to even HEAR if God is calling us!

Today, we look to the example of Christ, who descended, carrying all His beloved into the waters, saying Yes even to the most degenerate sinner, going into death, carrying the weight of the world, and arising to the manifestation of the Holy Spirit and the voice of God the Father proclaiming, "This is my Son, with whom I am well pleased!"

Maybe some of us, if we would be willing to give the same fiat shared by Our Lady, the Mother of God, and Christ Himself, would hear that same voice one day, saying, "This is my daughter, with whom I am well pleased!"

Do we not all desire to hear these endearments?


Yet how can we hear them if we will not approach the waters?

How can we ever hope to hear God if we are unwilling to disturb the glassy, reflective but superficial surface of the waters of baptism that have called us into eternal union with our Creator?  Baptism calls us into the self-sacrificing depths of God, not to admire ourselves in the photogenic surface!

Christ went into the waters of the Jordan alone, without His Mother seeking to hold him back and protect him from drowning.  She followed Him to the Cross and remained there with him, saying yes even to the sword that pierced her soul as it ran through her Son's most sacred heart.  So are called the parents of a priest or religious. So are called the parents of a man or woman who is called to marriage. 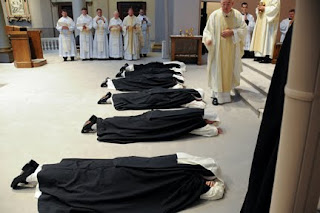 None of us is ever called to a Vocation alone, for like Christ, we take the world in all that it is with us when we descend, and we bring it all with us when we arise with Christ into eternal life.


The real sacrifice of Vocation is this:  Do we cling to the world when we seek God....or does the world cling to US?

Therein is the answer to our willingness to answer the Call.

Are we WILLING to give our own humble Fiat (Let it be done according to His Will), or will we walk away, not willing to disturb the picturesque waters that hide beauty we will never plumb in our pride and self-love?
Posted by Adoro at Monday, January 11, 2010