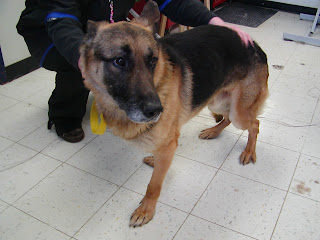 When "Bear" came to me two weeks ago, as I chronicled, he was stinky, he was filthy, and, well...just plain YUCK!   I did what I could to clean him, knowing I could not just throw him in the tub.  I am not an army!  And really, I didn't think he could tolerate something so scary. So I got creative in trying to clean surface dirt while introducing him to the idea of grooming...which overall he found to be very pleasant, apparently.

No more does "Bear" offend hail with the scent of "Eau de Poopy Kennel, vintage 2001"!

Today, thanks to a generous German Shepherd fan who reads my blog, Bear is nice and clean and sweet-smelling!  Thank you!

I called Petco yesterday to see what they could do as I didn't have the rabies certificate, and when I couldn't reach anyone at the rescue organization this morning, I called the vet clinic on his tag.  The tech from the Rock Rapids, IA clinic actually REMEMBERED the dog as he was there recently, commented about how sweet he was, and confessed she hadn't yet filed his paperwork!  She readily faxed it in on our behalf!

So I dropped Bear off  this afternoon (see photo from the upper left) and he nervously but cooperatively went through the gate to go have his much-needed bath. They knew he was a rescue-foster dog, that he was timid but I assured them he was also very sweet...just easily startled. In the photo of him,  note the laid-back ears, the hunched back, and the unsure expression on his face. (Oh, yes, German Shepherds are VERY expressive!) I do love how his left ear is cocked upward as if waiting for a word of some sort, maybe an explanation as to what was going on. 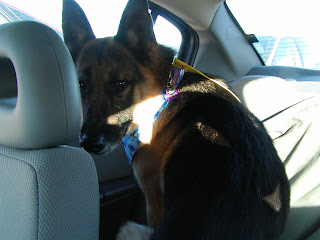 I picked him up a couple hours later and he came out looking, at least to my eyes, like a different dog!  As the leash was handed over he came out to me, circled around, wagging his tail and looking up at me shyly as he "hugged" my leg with his shoulder.

He smells good, his coat is shinier, fluffier (with the weight of all that filth having been scrubbed away) and he sports a blue bandanna around his handsome German Shepherd-patented ruff!

Bear has been doing very well. Although he's still easily startled (and often at times that make me scratch my head in confusion as to what I did to scare him), his curiosity and natural canine instinct to be social quickly overcomes his trepidation.  I have discovered that when he is scared and running away, the best thing to do is to continue what I'm doing especially if it is a necessary daily task;  for example, doing laundry or getting ready for bed at night.   I can't change these tasks..he has to get used to them and learn they are normal. If I don't react, he'll learn eventually that there is nothing to fear.

As it is, this technique is helping him settle into the routine of daily life in a house.

There are other times, however where I realize I've frightened him with a sound or motion, and so I will crouch down and invite him to come to me.  If I am closer to the ground, he seems a lot more willing to approach and extend his inquisitive nose in my direction so I can scratch under his neck.  At these times I will NOT reach over his head, for as a dog, he finds this to be intimidating and something maybe to be challenged.

Slowly he is learning to trust me, and I can see that things which were frightening to him in his first few days are nothing of notice anymore. Over time, he'll become as blase' and bored as my dog.

One of the joys of fostering (and as I've experienced in the past, adopting a pet from Animal Control or a shelter) is really watching a dog become what he is and what he was intended to be.  In only two weeks, Bear really is a completely different dog.  He has gained weight so that his ribs don't stick out QUITE so much, his coat is shinier (noticeable even BEFORE his bath), his coat is softer (brushing and regular attention), and he has discovered the joy of drinking liberally from a water bowl filled with fresh water!

Ah! The simplest things in life are the most important!

All of this has brought him out of his shell to help me observe his personality.  He is like a perpetual puppy, discovering the world for the first time. Everything is new and exciting! 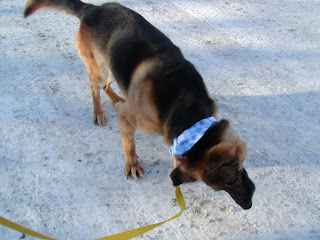 He has taken to randomly BOUNDING about in the morning when we go outside right away, and later, on our morning walk.  Every so often he finds it necessary, much like a teenaged boy, to body-slam his companion, which is usually my other dog.  Of course, she is so focused on scent and the business at hand (a professional, dignified, grown-up German Shepherd that she is...) that she barely notices his juvenile exuberance.

It's fun to observe this "old dog" playing like a puppy, and it's fun to watch my own dog treating him as such, with great patience, as though to say, "OK big boy, get it out of your system and then leave me alone...."

We have had a little setback in housetraining, unfortunately.  Of course, these regressions are expected. He's still learning, after all!

This morning we came downstairs and as usual, I put my coat and boots on to take the dogs out. Even though he hadn't HAD any "accidents" since his first night (where he introduced himself in very strong terms to my kitchen) I KNEW we weren't done. After all, this dog isn't yet neutered, and even neutered males can't seem to contain their desire to make their presence known through their easy contributions of scent and ownership.

Well, as I was putting the leash on my other dog (as it was the first in hand) and saying "Outside!"  I heard a suspicious sound, and looked back in time to realize Bear was claiming a box intended for Half-Price books...and some of the carpet...and the kitchen floor.

At the sound of my voice he did stop and came to me so I could put the leash on. We went outside where he managed to finish his business properly so I could praise him...properly.

Doggie breakfast was delayed due to canine cleanup in aisle 5.

So I will be more vigilant, snap a lead on him before I even put my coat on in the morning and won't take my eyes off him until we come back in for breakfast.

How is my own dog fairing in all this chaos?

Well, she IS a lot happier as an only dog. I see that very clearly. I saw it after Fire, my greyhound died, and I see it now. But she's rolling with it all, she's holding her place as well as she can, and every so often she shoots me looks of disappointment....like this afternoon when I brought Bear back into the house. Clearly she'd hoped he was gone.  No such luck. So she is also withholding her favorite sign of affection from me; ubiquitous kisses.  I get no more kisses, apparently.  She's not really "speaking to me" these days, unless she is seeking to show dominance in status, and then she's my best friend.  (See? Dogs really AREN'T so different than cats..I'm just waiting for her to pee in my shoes or on my pillow!)

But we are having some "quality time" and she lets her opinion of Bear be known when she is seeking her special moments of attention.  Bear is a dog who wants to nose in on everything so has to be kept at bay. As he respects my dog's teeth far more than mine (and showing mine has  a far different meaning anyway), I let my dog handle that process as I try to continue giving her the attention to which she is accustomed.

Overall, I, too am adjusting to a multiple-dog household.

This is obviously greatly aided now that Bear isn't the doggie-equivalent of Charles Schultz's "Pig Pen".  (How funny...I always LOVED Pig Pen because he was such a sweetie...if stinky!)
Posted by Adoro at Monday, January 11, 2010

I'm glad Bear had a successful trip to the beauty parlor! I'm sure he's much pleasanter to be around. It's really amazing that he's come so far along in just a couple of weeks (potty lapses not withstanding!)

The kindness of Bear reminds me of the day Miss Active (and her brother and a friend) came to our yard many years ago. The father was mauled to death, and the brother disappeared suspiciously. But still over a decade later, Miss Active, the sweet tabby, has become a nice nearly 15-year old cat who has embraced every family member, including the poodles.

This is all great to hear, and bless you for taking him from darkness to light! :)

He sure is pretty!

For the record, my cats don't pee in my shoes or on my pillow! Sodak and Kaylen wanted me to say that.

Bear looks so much like my rescued German Shepherd, Shadow. She too was a frightened, tick covered mess when we found her at the town shelter. You are doing great with your dog. The housebreaking takes time. Shadow's turning point was my keeping a rigid schedule and recognizing that for whatever reason, she needs more potty breaks than our other dogs ever needed. She still is terrified of certain sounds (our AC/heating makes a sound like a bug zapper, which sends her into a terrified huddle - what that's about I don't think I want to know) but after two year with us, she is now such a wonderful dog that our friends tell everyone about this miracle shelter dog. Your Bear will grow into a wonderful family pet. Good luck!!!

When your dogs are really mad at you, they'll mark your bed. The top of your bed. And every other bed in the house, too.

That happened exactly once with one of our well-housetrained dogs that we'd had for years. We're still not sure what it was all about, but boy, did we know she was mad at us.