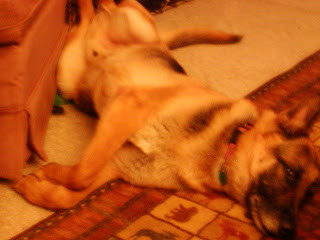 My blog must seem so schizophrenic these days;  one day writing of discernment or other spiritual topic, the next, about the realities of being a "foster mom" for the first time. Just goes to show that life isn't one-dimensional.

It's actually possible to discern God's will while living life in all it entails, so really, I make no apologies for blogging about this part of my life.  (I've lost a few readers since Bear's arrival, and find it hard to believe my discernment posts would cause such a huff.)

"Bear" is doing very well, but there's a secret we aren't going to share with him:  tomorrow he's making a very special trip to a Human Society's mobile unit for a very special surgery.


Yup. That's the one. The one that all the men in my audience would prefer I never name.

For some reason, even though it's a DOG undergoing this surgery, grown men cringe and grab at their privates when this particular surgery is mentioned, as though it is being proposed that it be applied to them.

Sotto Voce:
Incidentally I find this hilarious as most men these days don't NEARLY cringe so much at the sound of "vasectomy" or even pretend to cringe at the sound of "tubal ligation" which is infinitely more dangerous for women than what they undergo.  It should be noted that those surgeries in human beings are morally incompatible with the spiritual life and romantically incompatible with the definition of true, sacrificial, sacramental charity. So maybe I don't find it so hilarious after all.

Although I haven't been instructed to do so, I will be withholding food and water tomorrow morning from "Bear", driving him to his temporary destination, and picking him up later, with the challenge of "keeping him quiet."

Have you ever tried to keep a dog "QUIET" after surgery?

I recall picking up a female dog we once adopted from Animal Control. The City paid for her surgery, and I remember going into the vet's office as the harassed vet tech passed the leash to me. The dog was not just excited to see me and pawing at ME, but desperately scrambling to deeply know all the dogs in the waiting room as well.

"Keep her quiet for a few days." said the harried Tech, without much confidence.

Say WHAT?  She's doped up NOW and not even TRYING to be docile and quiet...what happens when the drugs wear off???

But for the only time in her life she laid down in the back seat once removed from the stimulus of the vet's waiting room and when we got home, she found a spot in the bedroom on her dog bed where she just SAT...head down, ears floppy....not sure whether to sleep or just hang out in her dopey highness.

Eventually sleep won out. Not until after much confusion, though.

I don't know how Bear will be tomorrow when I bring him home, but I know it'll be a challenge to keep him quiet.


He may be 9 years old, but he loves to play, he has taken to bounding around in happiness and joy and every so often he gets the "zooms".

This morning, this "malady" hit him and after tiring of figure-eights in my narrow livingroom, he settled for spinning on a dime a la Quarter Horse Extraordinaire.  All the while, my dog,  who was first intimidated by his antics and found the need to flee to the couch for refuge, became quite intent on his activities.  When Bear began to spin she took special notice and after a period of solemn study, she suddenly BOUNDED from the couch and POUNCED on him mid-spin, apparently deciding it was an opportune time to gain the upper paw.

If I had this on camera, it would go viral and win awards.

But, alas, you'll have to take my word for it.

This dog is ready for a real home, methinks.

Incidentally, I learned today that a nice couple is interested in him so a meeting will be set up with them not next weekend, but the one after (as I am not available this coming weekend due to class.)

Part of my job as a foster is to go with him to meet his potential adoptive family, the reason being that I can answer questions on his personality, training, how best to handle certain things, etc.

For example, tonight I learned that the signal for "sit" as commonly accepted in dog training circles is a signal to "Bear" to flee.  An adoptive home, if using traditional obedience training, will need to either use a different signal or take the time to teach him that the hand signal for "sit" is a good thing, not a cause for fear.  He can certainly learn, but that hand association will take more time with him as he has several things to overcome.

To all you men out there....for Goodness' sake, STAND UP STRAIGHT!  Yes, I can see you and you look RIDICULOUS!

Empathy is fine and good, but when you cringe like that you look like a bunch of sissies!  After all, the guys out West throw those oysters on the barbie as soon as they're removed from the calf every summer!  And in fact, GUYS are the ones wielding the knives that cut the "manhood"!

It's not like anyone is asking you to partake in a new delicacy compliments of the Humane Society!

The photo is classic!

I'll say a prayer that Bear's surgery won't be too traumatic. Yeah, I've heard the "keep them quiet" advice from vets, too. Easier said than done!
I like your Bear blog posts; I'm going to miss him when he gets adopted. Of course you can still blog about your own dog.