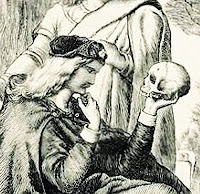 Creeps in this petty pace from day to day,

To the last syllable of recorded time;

And all our yesterdays have lighted fools

The way to dusty death. Out, out, brief candle!

Life's but a walking shadow, a poor player,

That struts and frets his hour upon the stage,

And then is heard no more. It is a tale

Told by an idiot, full of sound and fury,

I wish I had some wisdom to offer. I don't. I have a story, but it doesn't contain wisdom. It's just a story,  as Shakespeare said, "full of sound and fury, signifying nothing."

Ten years ago I had a boyfriend I thought I was going to marry, I wasn't practicing my Faith although I was seeking God in all things, but like Augustine, seeking Him "without" instead of "within", and within the Church that has always been my Mother.

Late have I loved you, O Beauty ever ancient, ever new, late have I loved you! You were within me, but I was outside, and it was there that I searched for you. In my unloveliness I plunged into the lovely things which you created. You were with me, but I was not with you. Created things kept me from you; yet if they had not been in you they would not have been at all. You called, you shouted, and you broke through my deafness. You flashed, you shone, and you dispelled my blindness. You breathed your fragrance on me; I drew in breath and now I pant for you. I have tasted you, now I hunger and thirst for more. You touched me, and I burned for your peace.
~ St. Augustine of Hippo, Confessions

The last ten years has been tumultuous, amazing, heartbreaking, astounding, successful, a complete failure, and still...incredible.

In 2000, I was still on the ski patrol, training hard physically both for fun and for a Fire Department test, which, the closer the date came for the test, the more I wanted it although I hadn't been interested at the outset. I passed the test with flying colors, shined like a star at the interview, and was hired the following April to start in May 2001 as a cadet.

That fall, September 2001, we were at the dreaded Training Tower, perfectly in place to realize exactly what it all meant as we watched the World Trade Center collapse in the terrorist attacks. We excused the tears of our Deputy Chief as we wept our own, we watched the local police department dogs sniff our cars and the entire training facility realizing we might be next in a way we could never predict.  We were invited to quit, having watched 300 firefighters in New York lose their lives that day, doing what we were being trained to do, and yet, we all came back. Not out of heroism of any sort, but out of a sense of practical reality, a work ethic instilled in us, a desire to do something good even if it meant our own lives in the end.

And I'm going to say what no one has said, in all that I've read and experienced. Here's why we ALL came back:   Because even though we'd seen something horrible, we were all in our 20's and didn't really, at heart, believe it could happen to US.  Not that.

Well, I did, and it took the wind of my sails, which, by that time were already patched, fully of other holes and not accepting any more breezes.  But I digress.

A week later I was injured in training because of another bullheaded cadet with more muscle than brain. I tried to get by and finally had to report the injury, fearing someone else would be hurt if I couldn't hold up my end of the work. They put me on light duty and I had surgery on the Feast of the Immaculate Conception under general anesthesia, without benefit of the Sacraments, my first surgery ever. I still wear scar and am a bit proud of it, just wishing I had a better story to explain it.

The Department let me go (with references from the top) in May of 2002 at the same time they dismissed several other firefighters on light duty, near retirement, and a class in progress.  I spent that summer looking for a job, a fish out of water, wasting time to appease my Work Comp rep who didn't seem to understand I wasn't qualified to be a Police Chief, a wilderness counselor, or a sous chef.  Or all three at the same time.

When I finally did find a job I was grasping at straws and she asked me if it was what I really wanted...causing me to nearly reach through the phone and strangle her!  But work in Insurance I did,  bought a house in early 2003 at the age of 30, was promoted to an Investigator position the following November, handled my first fatality, my first couple fraud cases, and for awhile...loved it. It was my dream job (except for the fatality, which I will NEVER forget!)

It didn't take long for me to begin to hate my job and my life, although in the meantime, my conversion was taking place, I found a home at my parish, became involved in a few things and began to hear God's voice in my heart and soul, asking me to consider Him as my soul focus in life.  Was He calling me to become a religious sister?

Although I don't properly consider the year that Call took place, I know it happened, probably in February of 2004,  and has been an undercurrent, has been the force of a waterfall and has been as painful as rapids in a drought for the rest of the  first decade of this current century.  Although right now it is at a trickle at best, given that my Vocation is far from decided, this decade leaves me painfully raw.

My search for God and the encouragement of a friend led me to look into Graduate school, a desire of my heart ever since college.  I'd long given up on the idea until his words of wisdom combined with a fortuitous attendance at a Catholic Conference made me both realize how thirsty I was for knowledge and thus to ask the question:

I began my first graduate course through Ave Maria University thanks to a priest at my parish who told me about the open enrollment for that class, and  that May, 2007, after much angst and agony and uncertainty as to how I was going to pay for it, I applied formally to the program and was accepted for that Fall...with a scholarship to pay for one third.  The rest...through unsubsidized graduate loans.   I decided to trust God and went for it. Finally...a grad student...in Theology no less!

In July that year, I turned in my resignation to the Insurance Company that employed me, having no place to go, certain I would lose everything. I was ready for that, sure I'd be in a box of some sort by winter, whether on a corner in Minneapolis or one in the ground, having frozen to death.  It didn't matter; I knew that life was too short to waste in a job that went nowhere, meant nothing, and truly held no security of any real sort. Not given what I saw happening as the most important and loyal people in that company fled for greener pastures.

But God answered and only a couple weeks after I started school again, I was employed at a parish in a job for which I was grossly under-qualified, inexperienced and....totally lost.  Yet it was fruitful in many ways, I met some religious sisters who thought I might have a Vocation and encouraged me to consider it again. That took me into 2008, where I visited Ohio, where God hit me with a 2x4 during Mass at St. Sebastian's in Akron, asked me again to look at Him as my sole lover, the Lover of my Soul...and so I did...quite seriously, and this time, finally ready to do so.

It was another year before I was FINALLY able to visit convents, which only came about because of the time God had provided to me, and the finances provided to me both to travel and to pay my bills...just last summer.

The last year has kept me on edge constantly, certain that I would lose everything, even as I gained more than I ever requested, expected...or deserved.

The last months of this year have been a "wall" I hit hard, not really caring about anything anymore. As I studied the Immaculate Conception, I didn't care, all while I was also dealing with my Vocational crisis, certain maybe my life had no meaning at all. It was a complete act of the will to get through nearly every day of the last few months.

I have ended the year grateful to be through another semester, nearly certain I am NOT called to religious life yet sure there is something I still don't know, something else I need to explore before I can resign myself to a life of committed singlehood...and that itself will involve its own discernment.

I begin 2010 not with real hope, for I'm not sure there's much left after the last decade and the last soul-wringing  year that was 2009.

Still, there is always a glimmer, as long as God is involved, and so I invest myself completely in that glimmer, hoping for the best as I am preparing my heart and soul for the worst, for I have nothing else to expect.

I begin 2010 as a perpetual pilgrim, realizing this state may never change and may be the state that finally brings me to sanctity;  God in every moment, living on the shores of Divine Providence as the world threatens to tear me away as I claw at the wet sand, trying to cling to the Rock.


There is a tide in the affairs of men.

Which, taken at the flood, leads on to fortune;

Omitted, all the voyage of their life

Is bound in shallows and in miseries.

On such a full sea are we now afloat,

And we must take the current when it serves,

Or lose our ventures.