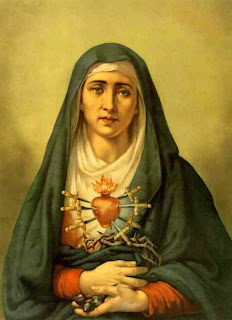 As the title indicates, I have been pondering spiritual motherhood. Lately, in prayer, and especially after having attended yesterday's Ordination Mass, my devotion to the Priesthood of Jesus Christ has been given a radical kick.

Yet…I don't really understand Motherhood. How can I? My mother was wonderful...for the first part of my life. And she's wonderful now, but our relationship has been very, very damaged. How, then, can I be a mother to anyone.

Last year, after a First Communion Mass I had coordinated, one of my catechists gave me a corsage. It was Mother’s Day and I protested to her that I’m not a mother as I am not married and have no children. I’m not deserving of the honor of a corsage. She disagreed, as did a couple of the parents of the children receiving the Sacraments; she called me a “spiritual mother” to them all. I was deeply, deeply touched, and humbled. In truth, this lady had helped me greatly in my first year in that parish and in truth, was far more a mother to me than I was to ANYONE!


Maybe most importantly, she lives her life as an example to them, and whether they realize it or not, they follow that example as they grow. They take on her practices, her gestures, and even if they don’t share her interests, they at least understand and support them as they grow into their own calling. But most importantly, if she sets a good example and treats them in accordance to live that example themselves…they grow up and reflect, in a way, her image.

She carries them with her in hear heart, pondering the Paschal Mystery, the Misterium Fidei, and the Priestood, knowing they are one and the same. She ponders deeply the needs of her Sons, understanding human nature, never in denial of that reality, even as she recognizes how we strive for holiness, and the importance for all that their spiritual Fathers, Priests, remain in a state of sanctity. Holy Priests create Holy People. It's a fact that cannot be denied.

And if one of those Priests should fall, she does not abandon him, but prays and sacrifices all the more so that he, like the Prodigal Son, might return home and be welcomed and celebrated by the Father.

She remains in the background, always implied, never seen, rarely recognized, few words spoken or recorded, and therin is her mystery and her necessity. Just as the Priest empties himself in order to stand in persona Christi, so does the spiritual mother empty herself in order to allow herself to be pierced with Divine Love and be so united with Christ at the foot of the Cross that she can lay down her own life for the Church. It is a hidden sacrifice, and even if it is recognized formally, it remains in the mystical realm, completely following the scriptural silence of the Mother of Jesus who contemplated much, but revealed...very little. The few words she spoke pointed to Jesus and all that He did and would do.

Spiritual mothers try to be conformed to Christ as much as possible, through the guidance of Our Lady, and through her intercession and model, are also conformed to her in a special way. They also know, that like our Blessed Mother, they will be pierced with suffering and therefore united to Christ in His Passion.

To be a spiritual mother of priests is to enjoy a dignity not merited, not requested, and perhaps not desired. Yet...it is a calling. A Vocation within a Vocation. A hidden Vocation, for most of her sons will never know her, nor will she know them. Yet, once she has given her fiat, each and every time a Priest falls, she will be pierced, just as Our Sorrowful Mother was pierced through the depths of her soul as she followed Christ through His Passion and death on the Cross.

We look at scripture, and who remained at the foot of the Cross? The Mother of our Lord and other women, spiritual mothers united with Mary, devoted to Jesus, and their one remaining son, the Apostle John...the only one who did not flee. And incidentally, the one who outlived all the other Apostles for the good of the Church.

This weekend, I looked down at my hand, for I wore a ring given to me by my own Mother a few years ago as she can no longer wear it. It is a Mother's ring created out of Black Hills Gold: a rose with two leaves, symbolizing a mother and her two children. I've long felt weird wearing it, yet, finally, this weekend it made sense to me.

I will continue to ponder this and pray about it, and there is much left unsaid, which is as it should be. By no means is this post complete, and perhaps it will never be so.

Ladies...are YOU called to Spiritual Motherhood for Priests?

Well, you're my Spiritual Sister ;), So that'd make you the Spiritual Mother of my nieces and nephews ;)...I could totally see this for you...I'm here to provide encoruagement :)...I want to go to Minn

Joe ~ LOL...there's a woman at the parish where I work who has made me her children's spiritual "aunt". lol!

I don't think she realizes what a mess I am!

MN is a good place, really. WE have a great Bishop, we have Adoration chapels...we have possibilities galore. If you came to our sem and wanted to be incardinated here...I'd support you, spiritually, in that endeavor! (Have to qualify that as..estoy bien pobre!

I am EasterA from the Diocese of Honolulu. Esther of A Catholic Mom in Hawaii and I started the Spiritual Mothers Apostolate in our diocese in February 2008. Though we requested that it be a "quiet" apostolate, we have the approval of our bishop. Our priests and seminarians were all thrilled to know that they each have a spiritual mother. There is a special spiritual bonding between a priest and his spiritual mother, just one of the many blessings...

Praying... and again, thanks!

I believe that as women we are all "wired" for motherhood in some way. I agree spiritual motherhood especially to priests is a calling.
As I have said before I have felt this for sometime, but haven't been sure where to go with it. Your posts on this topic, as well as Fr. Mark's Vultus Christi blog have helped to direct me in this.
Thank you and God Bless you in your spiritual motherhood.

I see Easter beat me to it but yes, we were called to not only be spiritual moms but to coordinate this apostolate with our bishop's blessing.

Easter and Esther ~ There is also an apostolate beginning here in our archdiocese, which is going to be operating at a "double blind" principle. I think it's up and running, although not sure, and I've spoken briefly with the woman who is beginning it. I'm still discerning whether that is the direction God wants me to go, or...does He prefer I just pray quietly, in my own way? I don't know yet, but will be discussing with my SD next time I see him, I think.

Karinann & Julia ~ yes, I do think we are all spiritual mothers in some way. I hadn't really thought about it from the perspective of the different focus of that motherhood; some are more devoted to the unborn than to others, some to the poor, some to priests...hmm...all different expressions of motherhood! thanks for pointing that out!

Phenomenal! May I please forward your article to the Spiritual Mothers of Priests of the Diocese of Tulsa? It's really brilliant.

Thanks to you and Fr Mark, I've reached you through the link he put on his Vultus Christi blog.

Am most grateful for this help in preparation for tomorrow and the year(s)to come.

I was going to post about this on my own blog today. Now a simple link to your post will be much better than anything I could have composed. I pray that more women will discover this vocation and will wish to embrace it with us.

God bless you,
Jane 'Thoughts from an Oasis in French...'

Jane ~ Thank you for your comment, and for the link!

I do hope more consider this vocation, too. Our priests need prayers, and we need our priests!

I've found an audio sermon from a priest that gives specific suggestions on how to participate, for lay women, and even girls above the age of communion.
It appears that he has developed his own suggestions, rather than an official position.

On that site, in the search box, type in - spiritual mother and it will bring up the audio to listen. It's the only source I've found for lay women.

If anyone has more, I'd be interested in knowing.

I give you my FIAT in this commitment Father! Thank you!
I love and treasure priests and their vocations.
Hassie Breaux
Louisiana