Ordination Mass at the Cathedral of St. Paul 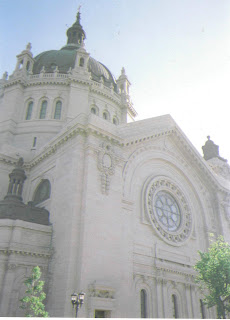 Sounds like you had a great time. Just a small point of clarification- The 2 seminarians processing behind The Archbishop were not wearing Humeral Veils, but vimpae. Those carrying them are commonly called vimps. The vimpae are like humeral veils, but are worn specifically so that no one touches the Miter and Crosier besides the Archbishop.

CUAguy ~ Thanks! I asked a friend about that, he had a brain fart and couldn't remember the term...I still can't figure out why he was comparing it to a nun's wimple (but for the sound!) lol.

I just edited this post a bit, found some errors and bad sentence structure, will have to go back and add the proper term!

Thank you for posting this. What a wonderful celebration! Through your description I felt as if I was there. It brought back memories of my Dad's ordination as a Permenant Deacon 1n 1976. Thanks again

Thanks for sharing about this great event in the life of the Church in Minnesota :)

I wish I could have been there!

RJW ~ Wow, that must have been so powerful for you!

Suzanne ~ Oh, you would have loved it!

In the Pope's biography, he said that when he was a kid, people said you should wear out a pair of shoes if you have to, in order to get a new priest's first blessings at the Ordination Mass. So you're pretty blessed! :)

Please tell me about the tradition of kissing the hands of the newly Ordained Priests. I saw it happen today at St. Agnes but did know where it became.

May God bless all these new Priest!

No need to reply. I found it. Here is the link: http://www.ewtn.com/library/liturgy/zlitur225.htm .

Adoro: Yeah! I'm glad you were there!

Maureen ~ God is very, very good to me. I don't deserve it...what a testament to His faithfulness!

Katie ~ Thanks for posting the link as I would not have been able to answer your original question! I've since passed it on to others. :-)

Cathy ~ Me, too. Wish you'd been there, too! Maybe next year? Only concern is the date...with Grad school, if it's during our year then I simply can't do it. Next year there's also the graduation date to consider. But...would LOVE to go again!