This weekend, with my permission, Mom told the extended family of my Vocation.

From what I understand, one uncle, the only one who knew I was even considering it simply said "Good!". Another relative, sitting nearby, for the first time in recorded history, was actually shocked into silence.  (This is good luck; it bodes well for my own future ability to keep silence!).  Unfortunately I think they had to use a crane, a backhoe, and some crowbars to pry her jaw out of the ground. She is recovering nicely and attended the family wedding.  No scarring was noted by observers. 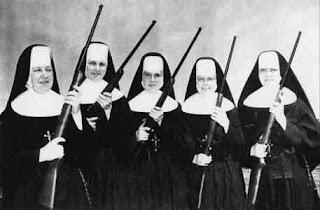 An unnamed person (whom I suspect to be a certain cousin) reacted thus:  "Cool! The family is going to have a nun that can shoot!"

NO, I am NOT making this up!  He didn't even KNOW about the deputy who was teasing me while I was in high school, telling me I should become a nun. "A nun with a gun," he said with a chuckle.

So, now that the family knows and has had time to react and comment, I guess you can know, too:  I have made my decision, have asked to enter a certain community and have been given a yes.

Now, mind you, I've done no paperwork, taken no medical exams, no psychological tests. I've not jumped through any hoops and nothing is certain until the proverbial fat lady sings. (Where can I get a helmet with horns so that I can sing?)

Anyway, I'm not yet ready to announce where I am going, God willing.  I have thousands of dollars of debt between student loans and credit cards (which were used to pay for everything my paycheck didn't for the last 3 years), and my house, even IF it sells, has about $50,000 in negative equity.

No worries; I'm not in default on anything and haven't yet gotten to the point where I think bankruptcy is a good idea.  I'm hoping to come out of this scraped up but not completely squashed, but then again, I'm leaving my life as I know it in order to become united with Our Lord, so I guess being crushed is part of that whole plan.

So! I hope, if it does actually happen and I do actually enter as we all plan and hope for, that once I am clothed as a Novice I can go home to visit my family. That way, I can fulfill my cousin's enthusiasm, go out to the farm or a range and go shooting, full habit and all. He might die of joy at the sight.

Heck, if a Friar can use a guitar and a Monk can ride a skateboard for souls, who's to say a Nun can't use a gun?
Posted by Adoro at Sunday, August 29, 2010

Adoro, I am SO happy for you! I know I haven't read your postings as long as others on this blog, but I do know you have been sorting through options for a long time. That's wonderful.

Incidentally, the nuns with guns pic is a riot. I've never heard the term.

As far as claiming bankruptcy for student loans, good luck. There are student groups all over the nation fighting for that right, but at the moment, the feds won't let you do it unless you are at death's door (and even then, it's questionable).

It sounds like you are another victim of the economy and the plight of being a student. My sympathy and empathy.

Katharine ~ No, I wouldn't be looking at bankruptcy for the student loans. Those are excluded. (I know this and every time I bring it up SOMEONE mentions it! lol I need to remember if I bring up bankruptcy to add that as a corollary in the post where it's mentioned!) Bankruptcy would apply to the rest of my debt (like the $50,000 negative equity on the house in a market where the house won't sell anyway)


There are organizations that help to pay for student loan debt for those who are trying to enter the seminary or religious life. The Labore Society and Mater Ecclesia, both have different approaches. If necessary I will look to one of them for assistance with regard to student loan debt. But I need more info and a plan in place about where I'm going and when.

Glory Hallelujah!! I've been following your blog for a lonnnng time and could not be happier for you, and for the Church. You have my continuing prayers for God's gracious provision through all the details that remain between you and your habit. God bless you, Adoro!! :)

Charlene ~ Thanks, and please pray for me! By the way, where I'm going...they love animals. ;-) My dog can't come with me, but it's good to go to a place that values furry creatures!

Annette ~ Thank you for all your prayers all along. Couldn't have gotten to this point without them, won't make it any further unless they continue!

I am NOT doing this by myself!

CK ~ I'll be sending an email out to all you I know personally regarding where I'm headed and all the updates that the blog isn't privy to. ;-)

Continued prayers as the process continues...and very glad for you (and think I can guess which community! heh heh heh. But I'll wait for details as things develop).

I'd like to see the nun with a gun myself. It would make a great picture for my blog--and underneath, "if you read this blog, this could happen to you!!!"

IC ~ heh heh...you still owe me an email about Br. C! So...shoot me that email with his update and I'll dish on where I'm going!


Tell you what...if it actually happens, I'll have a photo taken ESPECIALLY for you with me & my gun.

Gosh..I'm going to have to sell my gun to a good Catholic who will visit me in the convent or who will let me visit them at some point...

You should know I'm not photogenic and that any image of me is likely to crash your blog, no matter how compelling the idea behind the photo.....your call...

I'm very happy for you! You will be in my continued prayers! God bless.

You know I have been praying for this... for a long time.


Now I have to work on two guys in my parish... that are going to be priests. I just have to convince them of this fact ...

Wonderful! Like others, I've been following your blog for some time and praying for you. Glad to see that you know about the two groups that help people entering religious life with their debts. Don't forget your parish and school; perhaps they could also help re the debt (have seen other folks do that....) At any rate, will be watching your blog and praying as you progress towards entrance. The best part (at least for me) is that you've said yes to Our Lord and are letting yourself be led (maybe with a little bit of kicking and screaming, but still...)

Adoro, I am so happy that you have reached a point of clarity -- and joy, which bubbles up from the page (screen). Prayers that the way ahead continue to be clarified by God's love.

That's wonderful, Adoro! My continued prayers are with you as you continue along your journey.
About the house, any chance you could lease it out for enough to cover the payments? That would at least take care of that part of your debt.

Melody ~ No. I'd have to be available to administrate that kind of business. Besides, the Association only allows so many rental properties, AND, in the last year alone, the townhome that shares my back wall has had about 4-5 renters.

Where would that leave me time to contemplate God?

The house has to go completely. There are no other options and I can't wait till that box to keep my stuff in is gone. (Since I won't have any more stuff, either, it's not like it'll be needed!)

Well, you could have knocked me over with a hummingbird feather!

God bless you, Adoro! (Do you think that they would let you use that name)?

I'll crank up my prayer machine and put you in as a top priority.

"All things are possible with God!" That's what Father Corapi's confessor said after Father announced to him that he was called to be a priest after confessing 20+ years of sins.

Thanks for prayers, need LOTS even to make this formal and plan an entrance date.

I hope you can still blog with us. I would like to watch you from afar going through the steps to make this happen. I'm very happy for you and for our church. God bless you!

Ahhh! Sorry, haven't responded to some of you!


Miria Rose ~ Thank you for your prayers!

Joe ~ Yes, and your prayers are clearly very much needed and appreciated!

Robin ~ It's nice to finally have a "goal" again, something more concrete and specific!

Belinda ~ Well, as long as I have a house and debt and a job, I'll be blogging. After that will be up to my superiors!

Congratulations, Adoro - may God's will be done!

I'm always the last to know! Holy... oops - can't say that. Wonderful news! I send you my best wishes and prayers.

Great news Congrats!!!
The order of nuns will be so blessed to have one such as you!
Will keep you in my prayers.