Feast of the Assumption of the Blessed Virgin Mary

As part of my Master's program, we had a course in Mariology. I have to admit that I hadn't been very keen on taking this class-elected option, however, as I was to find, it was probably one of the most valuable courses in my graduate studies.  We studied all of the Marian dogmas, how they developed, and where they were found in scripture, whether explicitly or implicitly.

I have copied/pasted below the content of one of the exam essays written for that class. Although there is more to the dogma of the Assumption than is contained in this brief essay, you may also read the Apostolic Constitution which defined the dogma, Munificentissimus Deus. 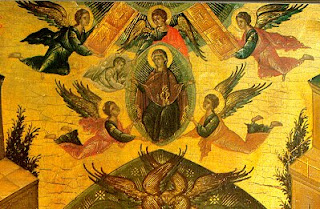 God willed that Mary be exempted from the rule of death and corruption because of her entirely unique privilege in which she overcame sin through the singular grace of her Immaculate Conception. This was an extremely unique privilege granted to Mary alone, as she was to, and did, bear the Son of God in the tabernacle of her body, requiring a particular purity. It is not a denial of the Redemption of Christ, but rather, more fully reveals who Jesus was; for only God could afford such a privilege to his creation. Mary was the new Ark of the Covenant, a living parallel to the Ark of the Old Testament which had been constructed of incorruptible wood. This was proleptic of the incorruptible body of Mary. Her freedom from sin is key in this dogma, for it is sin that gave us the corruption of the grave.

We recognize here, before we consider the fittingness of the Assumption, that the dogma is intimately tied in, not only with the Immaculate Conception, but also as Mary as the New Eve. She was a New Creation, prepared by God to be a vessel for Christ, and instead of Eve’s disobedience, she, through her obedience to the message of the Angel, was revealed to be the one to untie the knot of sin, making way for the Savior. She is the reversal of Eve and her sin, the preparation of the Savior of the World. There is a further connection that links Mary as the New Eve to her role as Co-redemptrix, referring to Genesis 3:15 as the Woman who crushed the head of the serpent. She was so united with her Son in the work of Salvation that it would stand to reason she would share in some of the privileges which would be consistent with her role, to which she gave her fiat at her very Annunciation.  "Let it be done to me according to Thy Word."

It is fitting, then, that Mary was Assumed into Heaven on several points. First, because she was not subject to sin, it would not follow that she should suffer the penalty of sin, that being the corruption of the grave. Secondly, given that she was the Mother of God, prepared to be a pure vessel, having contributed her flesh to His Incarnation, it is fitting that she should be like her Son, who also did not suffer corruption but resurrected in his glorified body. Mary’s privileges do not point to herself, but rather, more fully reveal God’s glory and the truth of the Incarnation. Her Assumption is fitting because it was not done out of merit for her, but reveals her consecration to God in the work of salvation, pointing to the miracle of the Incarnation and identity of Jesus as God’s Son. 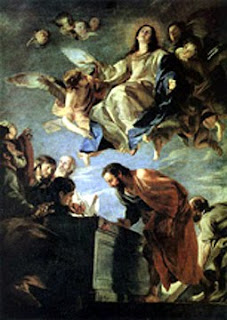 The Assumption of Mary was defined after careful research into the history of the claim that Mary was Assumed into heaven, as it was found that it had been revealed by God and belonged to the deposit of the Faith.

It was actually requested by 400 Bishops, 80,000 priests and 8,000,000 laity. A statement was sent out to the Bishops to inquire whether they believed the dogma could be defined as being revealed by God and belonging to the deposit of the Faith. Of 1,181 Bishops, 1,164 signed the statement giving their acquiescence. The research was carefully undertaken by theologians considering testimonies, writings, scriptures, liturgical texts, etc.

The early Church Fathers spoke of the Assumption in their sermons and homilies, speaking of it as though it was something known to the people. From the sixth and seventh Centuries, there were liturgical celebrations commemorating the Assumption or Dormition of Mary, citing that she could not be held down by the bonds of death. Additionally in 1972 archaeological excavations in Gethsemane in Jerusalem revealed that there was evidence revealing liturgical veneration of Mary’s tomb and Assumption.

St. John Damascene wrote that it was fitting that Christ’s mother should possess what belonged to her Son, that being freedom from the corruption of death.

St. Germanus of Constantinople wrote of Mary as the dwelling place of God, stating that it would not be fitting for her body to be corrupted.

St. Albert the Great had amassed scriptures and other works, including theological reasoning, an noted that the Angels’ greeting to Mary as “full of grace” was exceptional, revealing that she was exempt from the four-fold curse of Evil.

It is clear that this dogma did not simply arise out of a moment of pious devotion, but rather, through archeological verification, scriptural indications, liturgical celebrations, theological reasoning and divine revelation which has been present from the time of the early Church. As Pius XII wrote in his Apostolic Constitution Munificentissimus Deus, the Assumption of Mary was the culmination of her privileges in her preservation from the corruption of the tomb, and like her Son, she overcame death to be taken body and soul to Heaven where she sits as Queen at the right hand of her Son. 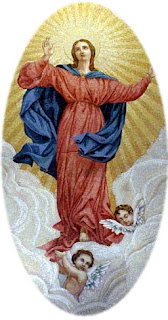 
And Mary said:
“My soul proclaims the greatness of the Lord;
my spirit rejoices in God my Savior
for he has looked with favor on his lowly servant.
From this day all generations will call me blessed:
the Almighty has done great things for me
and holy is his Name.
He has mercy on those who fear him
in every generation.
He has shown the strength of his arm,
and has scattered the proud in their conceit.
He has cast down the mighty from their thrones,
and has lifted up the lowly.
He has filled the hungry with good things,
and the rich he has sent away empty.
He has come to the help of his servant Israel
for he has remembered his promise of mercy,
the promise he made to our fathers,
to Abraham and his children forever.”
Posted by Adoro at Sunday, August 15, 2010

Sanchez said...
This comment has been removed by a blog administrator.
Sunday, August 15, 2010

Sanchez ~ Your link didn't work; I suspect it as spam so I am deleting your entire comment.

If your comment and link are not spam, please provide the title and author of the article you are trying to link.

Thank you. I apologize for any inconvenience. However, as I cannot trace you or the link I have to assume you're actually a bot.