Let us remember what made the Battle of Lepanto NECESSARY, for what happened then in Europe and what they defended so valiantly against is FINALLY, NOW overtaking Europe like a virus and is, as we speak, encroaching upon American soil, threatening ALL of our CHRISTIAN RIGHTS and FREEDOMS under GOD and under our Constitution.
"Those who cannot learn from the past are condemned to repeat it....."
( George Santayana) 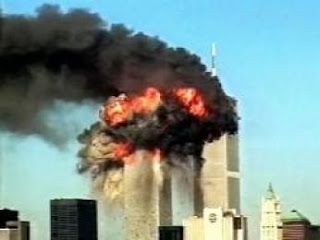 ...This time while lying on our backs and spreading our legs like dogs.


Gosh! At least the Europeans of yore had backbone and put up a fight! What the Hell happened to them, and is happening to we Americans, who preach freedom but are so willing to give it up in the face of passive impending Sharia Law?
Remember Lepanto and to Whom the Victory belongs...and place your allegiance, and your PRAYERS for both Europe and America there! 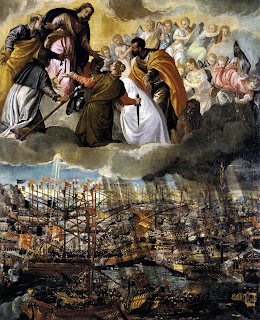 They are countless, voiceless, hopeless as those fallen or fleeing on
Before the high Kings' horses in the granite of Babylon.
And many a one grows witless in his quiet room in hell
Where a yellow face looks inward through the lattice of his cell,
And he finds his God forgotten, and he seeks no more a sign -
(But Don John of Austria has burst the battle-line!)
Don John pounding from the slaughter-painted poop,
Purpling all the ocean like a bloody pirate's sloop,
Scarlet running over on the silvers and the golds,
Breaking of the hatches up and bursting of the holds,
Thronging of the thousands up that labour under sea
White for bliss and blind for sun and stunned for liberty.
Vivat Hispania!
Domino Gloria!
Don John of Austria
Has set his people free!
Cervantes on his galley sets the sword back in the sheath
(Don John of Austria rides homeward with a wreath.)
And he sees across a weary land a straggling road in Spain,
Up which a lean and foolish knight forever rides in vain,
And he smiles, but not as Sultans smile, and settles back the blade. . .
(But Don John of Austria rides home from the Crusade.)
- G.K. Chesterton
"To the Victors go the Spoils"

Do not let America become the definition of "spoils"!


We have shed far too much blood over the Centuries for this country to become the spoils of the Sultan's bearded Losers of Lepanto. And we Catholics have fought them a LOT longer than you mere mortal secularist Americans, who don't even know what's coming and refuse to acknowledge your (and our) defeat to them as a possibility. 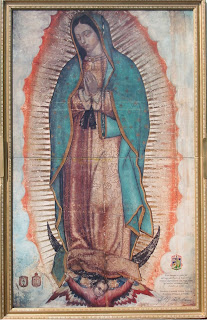 Email ThisBlogThis!Share to TwitterShare to FacebookShare to Pinterest
Labels: Alarmist My Ass this is America and I will defend her from Infidels, Apologetics, Catholic Defense, GK Chesterton, Lepanto

Nice. You should repost this again on October 7. Actually, given that both Lepanto and Tours were October Battles, maybe October should be official "Defend Christendom from the Infidels" month. :)