Do you know it's possible to actually see agony in another person? 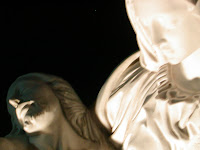 This evening on my way home from work, I stopped off at a local liquor store / wine shop for something I needed. I could quite literally have gone to any number of stores between my work and home, but I stopped at this one. Part of it was practical (they seem to have the best prices), but other than that, I really didn't have a preference of this store over another.

I quickly found what I needed (on sale! yay!) and went to the counter to pay. After the clerk had me sign the slip, the manager, who had been looking at me strangely a moment before, suddenly asked, "Do you like reds?"  [referring to wine].

He went on to recommend a Red Zinfandel of the brand I had purchased, and when I admitted I hadn't tried it  (and in fact didn't know this brand had a Red Zin), he invited me to follow him so he could show me something. When I started to pick up my bag, which had already been in my hand, he ordered me to leave it at the counter and just follow him. I shrugged and did as he asked.

The man led me to the extensive Zinfandel section and pointed out a couple, most top-shelf wines, some less expensive, and when I told him which I'd tried and loved, he pointed out the vineyard they were from. Great! But, he told me, as a fellow Zin-lover, he highly recommended this one particular Zin to me, and kept saying that he'd recommended it to his brother-in-law who swore that no way, it wouldn't be good. Apparently this was a huge point of contention between the two, for they were, as he'd said, "Gallo-men".  (This is a common brand of wine on the inexpensive side.)  But no, this man kept insisting that his brother-in-law try it, he would really love it.

Smiling slightly, the man said, "I'll do you one better!"

He reached up and took a bottle off the shelf then quickly began making his way to the counter.

I was thinking, "What, a discount?"

He took it to the counter, placed it in my bag with my other purchase, and said, "There's a catch."  he glanced at me, to the wine, and back at me. "Try it, come back, and tell me what you think."

I agreed to those terms, the fact dawning on me that for some reason, this guy had given me a free bottle of wine. It's not unheard of in wine shops when they're trying to promote something, or recognize good customers, talk with fellow wine aficionados, etc., yet I wasn't making the connection, exactly, of what he was trying to promote, other than maybe customer loyalty.

But still, there was something odd about the whole thing and I remained "unsettled", noting how the guy behind the counter maintained a strange expression as he watched this exchange. He wasn't directing his own discomfort towards me, but towards the manager with whom I was speaking.  This clerk, this witness, was oddly silent, not getting in on the conversation, adding his own commentary as is typical in a wine shop.

The manager led me out the door, a cigarette in his hand, shaking a little, still talking about the wine and how good it was, how much he loved Red Zinfandels but this one is by far his favorite.  We stood outside the door talking for a little bit, and as he tried to light his cigarette, he dropped it on the ground. He quickly bent down to pick it up, and this time I could see that more than his hand was shaking. His breath caught in a little ragged rasp. He was clearly not well. I began to wonder if he was a little drunk, except that I couldn't smell anything on his breath.

"I'm sorry," he said, as he began to light his cigarette. "You're the third person I've done this to today."

I was a bit confused as to why he was apologizing and what he was talking about. He inhaled and said in a slightly husky tone, "Today I learned that my Brother-In-Law died."

I gasped a little, immediately started to offer him condolences, but he put up his hand to stop me as he inhaled from his cigarette.

"Hey!"  He expelled, his voice getting a little gruff, "He earned the right. He earned the right!"   He looked away for a moment of silence as I tried to figure how to respond, then looked back at me, straight in the eye. "Try the wine. Just try it!"

Yes, I told him, I'd definitely try it, and definitely come back and tell him what I thought. He told me who to ask for when I came back, and if he wasn't there, tell whoever was whether "it sucks or it's great".  Fair enough. 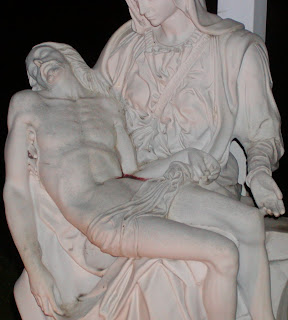 We chatted a bit longer about wine as he calmed himself down. It hadn't seem right to walk away just yet, and oddly, it almost seemed an intrusion to stay. But...something wasn't finished, so I stood, recognizing grief and waiting it out.

Normally I tell people that I will pray for their loved one, for their whole family. Especially when I'm wearing a shirt with Catholicism splashed all over it; this man knew he was talking to a religious person, at least on the outside (although at the time I wasn't thinking about what I was wearing.)  It was obvious that he was barely holding himself together. I wanted to ask him how he was, how he could possibly be functioning, but then again, it was pretty easy to tell, wasn't it?

He was making his work day a tribute to his brother-in-law. He was using wine to tell people about someone he loved.

I thanked him as I left, and promised, again to come back. I would try the wine.

Walking away with that Red Zinfandel, I was tearing up before I even reached my car. As I left the parking lot I knew I had to go to the chapel to pray, and offer all my prayers for this sorrowing soul. I couldn't get the image of the agony so apparent in his eyes, in his entire being. He was barely holding it together.

That explained the concerned looks from the clerk who worked with him. That explained his shaking hands, his rapid speech, his insistence that I follow him back to look at the Zinfandels, and most importantly, to try this particular Zinfandel.

But it wasn't about the Zinfandel. What he was doing had nothing to do with the wine.

I went to the chapel, offered a Divine Mercy chaplet, and wept for this man's loss, unable to stop the tears, the same tears that continue to flow even as I write this. I can't get his desperate agony out of my mind's eye. I prayed for strength for him, I prayed for his brother-and-law, for his sister who clearly is without a husband tonight.


You never know what others are suffering, or where you'll encounter them. A random errand can turn into an act of mercy and compassion you could never have envisioned.
When I left the chapel, I sensed that I should go out through the door that took me around the building. As I walked through the "prayer garden" I passed through the Stations of the Cross, the Sacred Heart, and then past a marble replica of the Pieta.

At the Pieta' I stopped to contemplate it for a moment, marveling at how it captured grief so clearly, knowing how close Our Lady must be to the man I had just met. I didn't even know if he was Catholic, or Orthodox, or Coptic, or whether he'd ever said a prayer in his life. But..I knew Our Lady and Our Lord were very close to him in his own deep sorrow.

Then suddenly, I saw something on the Pieta' that I'd never noticed before.

In order to see it more clearly, I had to step on the cedar chips at the base, but it verified what I thought it was: it looked like blood pooled between the side of Christ where He rested in death, against His Mother. I touched my fingers to my lips to kiss them, then touched my finger to that pool of blood, pondering the blood from the side of Christ; that blood that had put an end to death, paid our ransom, and opened Heaven to us.

As I touched it, my fingers brushing lightly against the paint, I noticed something else about it:

It was the color of Red Zinfandel. 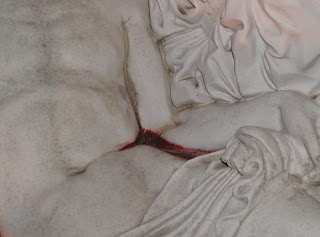 Email ThisBlogThis!Share to TwitterShare to FacebookShare to Pinterest
Labels: Death and Dying, Grief

May God rest his brother-in-law's soul and may the intercession of our Blessed Mother bring him to eternal rest and grant him peace during his season of loss. May the Lord grant you wisdom and grace as you continue to witness the love of Christ to this man.

That is a wonderful tale. Not many men are willing to express their grief. That must have been a wonderful relationship he had with his brother-in-law. I'd bet they were childhood pals growing up.

He was much more than a mere brother-in-law. He was one of those rare friends that few men can count themselves fortunate enough to have more than a couple at most; if any at all.

Thanks for sharing that, Adoro.

Ray ~ He wasn't "expressing his grief". He was fighting it to the death with every fiber of his being. That's why it came out like this.

This guy was suffering so deeply that he was looking for any outlet.

You and I would go to the Church and we'd pray.

He went to work, and gave the wine he loved to likely souls, probably those most like his BIL. Trying to keep him "alive".

The man was in denial, actually, maybe bargaining.

He was fighting his grief with all his might.

Pray for him will all of YOURS.

You don't have to use words to "express grief."

Ray ~ I agree. But I guess you had to be there. You'd understand what I mean if you had seen him, too.

...a story I won't soon forget...and you probably won't either.

Wow, Adoro. That was an amazing story, beautifully written.

And here's my question: what kind of shirt has Catholicism written all over it?? I want one!

I really like the way you tell a tale.

What a compassionate merciful soul you are! Thank you for sharing this story.

That photo is amazing - it looks so much like blood.