The Few, the Ragged, the Humble: The Remnants 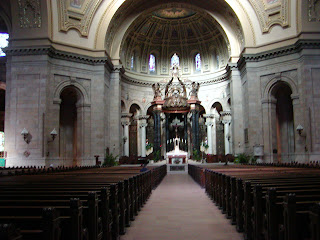 You can still find them there.

The remnants of times gone by.

They kneel in their pews, their heads covered, their gnarled fingers imperceptibly crawling along their beads as they stare either downward towards those archaic prayers, or, rather, focus on a particular point before them.  You can walk in front of them, you can drop kneelers or even hit a pew with a sledgehammer, and they will not move, will not acknowledge your ministrations of random noisemaking, even if you carry it out directly in front of them.  They don't move. They are more stalwart than the most steady Marine at guard at the Tomb of the Unknown Soldier, the British Guards at Buckingham Palace, or the Swiss Guards protecting the Vatican.

Hollywood loves to portray the Catholic Church in this way; sometimes they do so just to pull in the stereotypes, complete with a priest hanging out in a box; a priest who clearly has nothing better to do and spends his life pathetically awaiting the penitents who never come, unless, of course, those who do bring with them a ragtag bunch of cameramen hoping to imitate the success of  Hitchcock's "I Confess".

If clinging to the old artful stereotypes doesn't work, Hollywood has their own version of aggiornamiento, involving the same setting, but casting a sense of perpetual evil in the place of holiness, in vilifying the saint instead of canonizing the human, whether he be clergy or the little old Italian babushka hiding a deep secret of her true identity.

Still, "Hollywood" fails with radical dismality, for they lack both the faith and the art to understand the reality of the Catholic Church and even more directly, the prayers of the living "relics" who make up the powerhouse that defies popular categorization.

What happens most often in our age, through the media, is an ancient portrayal of Catholicism, a portrayal involving all that was beautiful, all that involves our patrimony. In reality, if one were to view such an image and walk into an average Catholic Church of our time, most likely they would be not just disappointed, but outright scandalized.

There is nothing in the vast majority of Catholic church buildings that transcends. Most Protestants visit Catholic parishes and think to themselves, never verbalizing their criticism for fear of offense towards their Catholic bretheren, "Why the HELL did you do THAT to your church?"

They come expecting beauty, and they get Podunk City Hall in BF Egypt.

People are so underwhelmed by the lack of transcendence that they fail to notice the humble figures at prayer in spite of spartan, or in some cases, outright offensive surroundings.

Admit it.  We all love the idea, if only that, of entering a Catholic church, noting the symbols of our faith, and really, don't we take comfort from the woman or man praying at the shrines, or, maybe, just kneeling in a random pew having private recourse to God in His own House?

Isn't that comforting?  Doesn't that image draw you in, and invite you to lay your own burdens at the foot of the Cross?  Doesn't that  very presence of a praying person make us wonder, deeply, if maybe they might pray for us, too?

Popular culture would have us believe the Church is dying, but for years and years now, the vanguard of Popular Culture has revealed images of Catholicism recognizable to souls throughout the centuries:  the priest in the box, the praying babushka. The images encompass the darkness of sin and the simple holiness of the humble, unknown saint.

We don't see Hollywood film the "Church" so many of us have attended since birth, though, because no self-respecting film director finds "art" in modern Catholic parishes. There is nothing to set us apart these days from our Protestant counterparts. Most Catholic parishes haven't the art, the architecture, or the faith to draw the attention of Hollywood anymore. We're so lacking in beauty these days that we might as well be a neutral version of Andy Warhol's monochromatic series in  beige.

The Church is a visible, living structure. She is the Bride of Christ, a Holy Nation, the Mystical Body of our Savior.  She is One, Holy, Catholic and Apostolic.

One can walk into many parishes in my diocese and find the backbone of the Church, the small, unnoticed, stereotyped and ridiculed souls at prayer. Sometimes their heads are covered with demure scarves. Sometimes with various forms of lace. Sometimes with hats. Usually with no headcovering at all, for such is not a dominant custom in our age. Yet they come, people of faith, they kneel, and they pray. They come at all hours of the day and night, for Mass and to remain or to come back for the silence and prayer afforded by the deep sanctuary of the chapel seeking solace and making intercession in the presence of Christ Himself.

There is comfort in the flickering light of the Sanctuary candles, there is confidence gained through the blaze that lights up the votives to the Saints who are constant in prayer in their state of beatitude.  There is humility to be found in both the brightest and darkest of chapels, and in all places, the faithful are laying down their lives from their very roots. 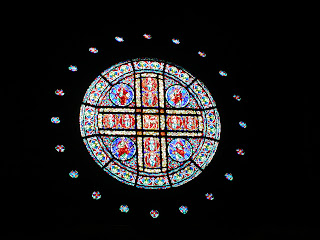 Some laugh at the Catholic Church, and say she is dying.

They of little faith will be astonished witnesses to the Resurrection, in our very own age. They will recall the purgation, they will remember their own ridicule, and in the end, they will fall to their knees and find that the perceived remnant was really only the catalyst, the moss that clung to the rock to make life possible for others.

Email ThisBlogThis!Share to TwitterShare to FacebookShare to Pinterest
Labels: Ecclesiology, Not Theology but Only Musing

Some laugh at the Catholic Church, and say she is dying.

They of little faith will be astonished witnesses to the Resurrection, in our very own age. They will recall the purgation, they will remember their own ridicule, and in the end, they will fall to their knees and find that the perceived remnant was really only the catalyst, the moss that clung to the rock to make life possible for others.

+JMJ+
Posted by Adoro at Sunday, May 09, 2010"
Newly appointed Bishop Fisher spoke of the Church being neither before nor after Vatican II. Very powerful words. The Church is in fact eternal because God is eternal and it is His church and we are the latest disciples (we hope). So many 'educated' members want to reform the church, but to what? Will this reformed church eliminate the wonderful remnants of holy women and men who when released from prayer speak such succint truth without euphemism or gloss?
Jesus died for everyone not only modern educated people who want to manipulate the church into their ideal.
Jesus was risen for the dead for everyone, not for specific groups. Everyone who calls on his name he knows.
Regardless of our position in society, our wealth, our education or lack of formal education but instinctive growth in our natural intelligence Jesus is there for us.

Those faithful older people you are talking about always remind me of Anna and Simeon.
My Dad is one of them now; comes a half hour early to Mass in order to say his rosary. Lays his Sunday best Stetson hat on the same place on the ledge, sits in the same pew 3 rows from the back. Won't notice distracting noises because he is quite hard of hearing. Hope I will be as faithful when I get to be his age (if I get there!).

Those who think the Catholic church is dying need to visit my little town of San Ignatio. The mission is the heartbeat of the town - and usually packed. There are people praying in there every day, even when there is no mass going on. The mission is open seven days a week for masses and between masses. I imagine that there are little San Ignatios all over the USA and the world. Let's pray so, at least.