Yesterday, Pentecost, I attended a Low Mass in the Extraordinary Form.


Sacred Heart had a beautiful high altar, but no communion rail and so prie-dieux were set up in rows at the foot of the sanctuary, leaving a space in the center as one would find had a communion rail been present.  The attendance was very low, just a few families and individuals scattered throughout; the kind of crowd certain media bastions love to photograph.But oh, was the Spirit alive there, and bearing fruit with virility... 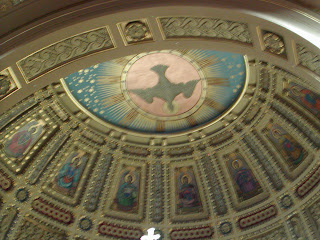 Come, Holy Spirit....
This Pentecost Mass was a Low Mass; no music, but the prayers usually inaudible during a Missa Cantata or a Solemn High Mass were audible to us which made it easier to follow along. (Not that I did a good job at doing so.)

Still, it was perfect for Pentecost, for the silences were deeper without the ostentatious professional choir that inhabits a local Baroque parish, a different kind of beauty in full compliment to the raucous noise found in other places. God does not come as a storm or an earthquake, but in that still small voice, if only we could stop shouting into the wind long enough to finally listen.

I relished the simplicity of the silences, the rhythm of the Latin prayers, the genuflections, and the chance to "offer up" the pain in my bad knees from their constant contact with long-petrified kneelers.

When it was time to go forward for Holy Communion, I recalled, as I always do, that we are proceeding to the foot of the Cross so that we may take the flesh of God into ourselves; the very Sacred Heart of our beloved Savior. I remind myself that we are being fed from the Tree of Life; given the fruit of the Cross, the author of eternal Salvation.

The anticipation grows, almost becoming an anxiety that there "won't be enough".  I want that kind of desperation for the Sacrament; the constant draw, the hope, the anticipation that leads to that raw edge; almost a fear of loss.

I know that because I have that intense interior longing at times, that the Most Holy Sacrament of the Altar indeed has value, more than anything else on earth. (I have not yet become too jaded to recognize Whom I am receiving.) When I have those moments of intensity, I hold on to them as tightly as I can, retaining them in my memory for it seems that daily, the dryness of the spiritual life encroaches even further.

This time, instead of kneeling at the rail, I knelt at the prie-dieu and waited, listening to the priest offer, "Corpus Christi" as he blessed each Communicant with the Sign of the Cross, holding Christ between his finger and thumb. I listened as he came closer, the anticipation building.


As I always do, I gazed from the alter to the Crucifix, visually taking in Love Incarnate, nailed to the Cross...for me.
Kneeling there wasn't the same as the Communion rail, and I could not stop the lament that rose from within; the opportunity to kneel at the same marble as the altar so as to receive from the same altar of Sacrifice itself. I was all too aware of the spiritual poverty of our age, and yet, joyful,  for here was a priest who could read the signs of the times and provide the spiritual sense of the rail, if not the reality. And in the Mass, the most important symbols transcend their reality to lead us into the deeper reality of the Paschal Mystery; eternal union with God Himself.

I knew, therefore, that it didn't matter that this makeshift "rail" wasn't actually of the identical material of the altar; the spiritual meaning far transcended what was under my knees.

Father and the altar server were nearing; now I could see peripherally the Sign of the Cross being made with the host at the intonation of "Corpus Christi".

As I continued to fix my gaze upon my Crucified Lord, I suddenly realized I could not recall whether or not to say "Amen" in response. I thought back to the different forms of the Mass at which I've assisted; the Ordinary Form in the vernacular (Amen!), the Ordinary Form in Latin (Amen!), the Ruthenian Rite of the Byzantine Church (non), and the Extraordinary Form of the Roman Liturgy (?????). I couldn't remember.

I tried to listen but I was so absorbed in Christ for the moment that the responses (or lack thereof) were lost to me.

My white lace head-covering  caught my peripheral attention as, subconsciously I sought to see how soon I'd be receiving Our Lord.  The veil itself (usually I wear black) was reminiscent especially on Pentecost, of a Bride's veil, of her purity. I recalled my First Communion veil, not really understanding that even then, I was a Bride of Christ and that all First Communicants are representative of the entire Church, past, present and future. First Communion Masses often feel like weddings because they ARE...and so is every Mass!

I was lost in time, but not a bit anxious about that fact. I wanted to kneel there forever, even if it meant waiting, even if Father eternally came close, but never brought Our Lord to me. It was sufficient to me to know that He was there; Holy Communion begins long before the actual moment of reception.

The voices and movements were closer and my heart pounded, thirsting for what was being offered to me. It is always this way at the communion rail; there is always this elongated moment of anticipation, this time to gaze upon the Cross, to absorb the Sacrifice made on our behalf, the Sacrifice calling or our own conscious and willing union, our own specific consent to the self-sacrifice required of every Catholic. Even in a few seconds, we experience this extended lifetime of intimacy, drawing us deeply into the fiery intensity sweetly burning Jesus into our souls, one heartbeat at a time.


As always, I was nearly trembling. 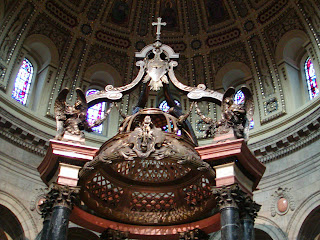 Finally Father and the altar server stood before me. I heard him intone, "Corpus Christi", and he made the Sign of the Cross over me, holding Christ in his hand as he spoke, the movement in perfect synchronicity with the Latin words announcing that finally, Jesus had come to me in all of His hidden Glory.


I opened to receive Him, giving of myself so that we might become one in this eternal moment of consummation, praying that this union would bear fruit not just in this world, but through eternity.
Father and the server left us in privacy as the next of the Mystical Body took their places at the foot of the Cross.

I crossed myself and stood, regretting having to go so quickly, but taking My Beloved Lord with me to the pew, kneeling there in silence, delighting in my Savior, thanking him with a quiet certainty far from superficial emotionalism. When tears arose, they caressed my eyes as briefly as a lover's kiss, falling upon the interior so as not to spoil the gentle afterglow.


*   *    *
2 O that you would kiss me with the kisses of your mouth! For your love is better than wine,
3 your anointing oils are fragrant, your name is is poured out; therefore the maidens love you.
4 Draw me after you, let us make haste. The king has brought me into his chambers.
We will exult and rejoice in you; we will extol your love more than wine; rightly do they love you.
~ The Song of Solomon 1:2-4
Come, Holy Spirit...
Posted by Adoro at Monday, May 24, 2010

I think you mean liturgies in their different forms; Byzantine Rite Churches refer to the Divine Liturgy, not Mass. Also, Roman Rite.

Nan ~ I love you literalists. You keep me informed.

The Byzantine Church is its own Church and within it are few different Rites within that Suri Iuris. Not all are the same even under the Byzantine heading (Suri Iuris)

The Byzantine parish in my area is specifically Ruthenian in their Rite, but they are part of the Byzantine Church. I cannot recall at this moment the other Rites (or Form as is the popular term developing in our particular age of theological development). It is akin, as I understand it, as a complimentary form of the liturgy within one of the recognized Churches under Rome, in the same way that the Ordinary and Extraordinary Form are equal and complimentary under the Latin Church, of which you and I are both a part.

I am still working on learning the language that accurately portrays and expresses both the dignity and the lack of confusion of the various Churches and Rites under Rome. I am completely open to your probably more proper definitions especially with regard to the Eastern Church and know I have among my followers many that can enter this discussion...and pray that they will.

Nan ~ Sorry, as an afterthought, I continued to re-read your comment.

"Byzantine" is the overall heading, and you seem to be placing the different Rites within the Byzantine heading as their own formal Churches. This would be incorrect.

Again I may be wrong, but many people do confuse the different Churches and Rites.

Byzantine is it's own Church, in union with Rome.

Those who use the Byzantine liturgies and fall under its jurisdiction are Byzantine, but would be considered to be the different RITES or expressions of that Church.

I could be wrong (I often am, in fact) but it is not the other way around, as you seem to have it.

So I guess I am a bit confused and hope an expert friend of mine will happen along and provide correct definitions for us both...even though this post has NOTHING to do with this combox topic.

Yes, I am a literalist, too.

Nan ~ Here is an article that uses Rite in the way that I did:

I have noted that the Byzantines (and other Eastern Churches) sometimes also disagree on the usage of the term "Rite".

Hope that link helps you to understand why I used Rite in reference to the specific type of tradition within the Byzantine Church.

Amazing these side commentaries that show up on blogs, usually having NOTHING at all to do with the post itself! LOL! (one of the fascinating things about blogging!)