"Jesus, through the revelation of the mystery of the Father and His love, fully reveals man to himself and makes his supreme calling clear."
~ paraphrase of Gaudium et spes, 22. 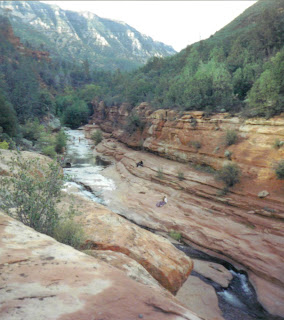 In Pastoral Theology, we covered several principles, one of which was termed the "Divine pedagogy". Many examples are given throughout scripture, for as we know, Jesus entered history "in the fullness of time." Sometimes people inquire why Jesus did not come earlier, or why Adam and Eve were not immediately redeemed. Why all the suffering and the journey in the desert and the falling away, the repentance, the covenants, the prophets, and all that drama?

Why? Divine pedagogy. Had God redeemed Adam and Eve immediately, there would have been no real meaning in salvation. It would have cost them nothing, it would not have penetrated their intellects and wills, and God would not have been glorified - not as He is now, having wisely, knowing His creation through and through by teaching humanity through experience the necessity of the immolation of the Christ for our salvation.

Pope Benedict, in his second book, Jesus of Nazareth - Holy Week, explains this principal of Divine pedagogy as a "path of love"; a sort of "flexibility" characteristic of God in His relationship with His people:

This "flexibility" on God's part is utterly characteristic of the paths that he treads with his people, as recounted for us in the Old Testament - he waits for man's free choice, and whenever the answer is "no", he opens up a new path of love. He responds to Adam's "no" with a new overture toward man. He responds to Babel's "no" with a fresh initiative in history - the choice of Abraham. When the Israelites ask for a King, it is initially out of spite toward God, who prefers to reign directly over his people. Yet in the promise to David he transforms this spite into a path leading directly to Christ, David's Son. (p. 121)

Pope Benedict XVI is speaking here of how God instructs, and of course, of God's faithfulness to Himself, thus faithfulness to man, whom He created and intended from eternity to redeem in the proper hour. Yet clearly, the people were not prepared and God offered several different "paths of love". Does this indicate that God wavered or was inconsistent? Does it mean that God predestined souls to do certain things in order to bring about salvation? Or can we look more deeply than that?

What it means is that God knows his children, and knows the choices men freely make, contrary to His Will. The different paths are a deep revelation of the Father's mercy and desire for man to fully understand God and himself, and therefore, to comprehend the amazing gift of life and eternal salvation.

Throughout the Old Testament, the choices, good and bad (mostly bad, it seems) made by men opened up new paths, fully revealing the woundedness of human nature throughout the centuries. It was only in "the fullness of time", when man was ready for the message of salvation, that Jesus would be conceived, Incarnate, in order to take on the ransom to be paid for our sins. God is immutable; He never changes and cannot change, yet, as Pope Benedict XVI points out, He teaches, and He waits for man to make a free choice to follow His Divine Will.

God has always been a Good Shepherd, who watches out for His sheep. The symbolism throughout our history reveals the loving heart of God, who knows we will wander even as He seeks to protect us from danger - like a shepherd gathering wayward lambs. Wayward lambs that are eventually tamed, matured, and come to know the gentle voice of their master.

Jesus used this same Divine pedagogy, utilizing parables, symbolism familiar to the people, and even when direct, prepares them by reminding them of their history. A prime example of this can be found in John 6, the Bread of Life Discourse. Jesus begins by speaking of the history of the Israelites wandering in the desert. He hearkens back to Exodus, to Deuteronomy, to Numbers, reminding them of the manna from Heaven that saved their mortal lives. From there He calls Himself the "Bread of Life" that brings eternal life, and following, makes the connection to the New and everlasting Covenant: that man must eat His flesh and drink His blood in order to enter eternal life.

And still....they walked away. All but the Twelve. That wasn't the end, though, was it? It was through those Twelve that the authority of Christ continues to reign on this earth through Apostolic Succession: a path of love, a conduit of mercy, continuing to lead souls through the Cross into eternal life.


Jesus as the Living Water
Today's readings, the 3rd Sunday of Lent, cycle A, are especially pertinent to this theme of Divine pedagogy.


The LORD answered Moses,
“Go over there in front of the people,
along with some of the elders of Israel,
holding in your hand, as you go,
the staff with which you struck the river.
I will be standing there in front of you on the rock in Horeb.
Strike the rock, and the water will flow from it
for the people to drink.”

Later on, (not from today's readings) in Numbers 20:7-8, the people again thirsted, and in response to Moses prayers on their behalf, the glory of the Lord appeared to him and Aaron, and ordered Moses to speak to the rock in the presence of the people, and the rock would yield its waters. Instead, Moses raised his staff and STRUCK the rock - twice. The water indeed gushed forth for the people in spite of Moses disobedience, and Moses was punished - he would not live to see his people enter the promised land.

Note well that God ordered Moses only to SPEAK to the rock, and the water would come forth to slake the thirst of the people, and this is a very important passage:  this is a step in God's teaching, in preparing people for the message they were not yet ready to receive.

Moving ahead, then, to today's Gospel, the woman at the well:

Jn 4:13-15
Jesus answered and said to her,
“Everyone who drinks this water will be thirsty again;
but whoever drinks the water I shall give will never thirst;
the water I shall give will become in him
a spring of water welling up to eternal life.”
The woman said to him,
“Sir, give me this water, so that I may not be thirsty
or have to keep coming here to draw water.”

One of the themes of Lent is this theme of water: of baptism leading to the Redemption. In looking back through today's first reading from Exodus, the connection to Numbers 20, and finally, the Gospel of Jesus as the Living Water, we are being drawn inexorably into the Paschal Mystery.

The Pathways of Divine Pedagogy:

Why are these readings significant? What connects them? Did you catch the symbolism as you read? What was it pointing to?  Who is the Rock?

Keep in mind that there are many layers and senses of scripture. What was being taught at that time to the people was proper to what they were able to receive and relevant to them in their time. Yet there was also another layer, that which we can see today given the totality of Divine Revelation.

To slake the people's thirst, God ordered Moses to strike the rock with the same rod with which he struck the river and turned it to blood. God said he would be standing before him on that rock, and indeed, water gushed forth to quench all who thirsted. Later, in Numbers, they thirsted again and God ordered Moses to speak to the rock. Instead, Moses struck the rock - twice - and was punished.

The Rock stands for Christ, who was crucified (struck) ONCE for our salvation. Jesus later called Peter "the Rock", which hearkens also to this verse, which in proper New Testament context reveals the authority given to Peter as the Vicar of Christ. (Again...layers of teaching within scripture.)

There is more here: at the Crucifixion, Jesus's side is pierced by a lance, and out flowed blood and water. Blood reminiscent of the river, and the blood that freed the Israelites from slavery, water reminiscent of the water from the rock - both struck by the same staff.

God ordered Moses to speak to the rock: this points to Sacramental authority, of the words of consecration uttered by the ordained Priesthood calling upon the Holy Spirit to change the bread and wine into the body and blood of Jesus Christ. (John 6).

And finally, the woman at the well in John 4, the woman asking for her thirst to be quenched, and Jesus Himself as the Living Water. The woman, in part, represents the Church, born out of the side of Christ, all of whom are thirsty, all whom hunger for eternal life, all of whom are fallen yet seek for what is lacking to be fulfilled.

And in this revelation, it is not only the identity of the Messiah that is revealed, but we are revealed to ourselves in the face of God and the mystery of His love, and seek to follow Him to our highest calling. 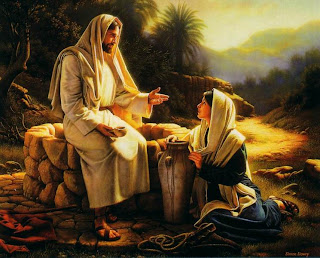 May the Lord reveal to us all which path of love we are to follow, and give us the strength to remain faithful to His Will in every moment. We thirst, O Lord, we thirst....
Posted by Adoro at Sunday, March 27, 2011

Brilliant! St Irenaeus would concur with every word...

You gotta love St. Irenaeus - except he would say it much, much better, more poetically and more concisely!