To Amend My Life, Amen!

Have you ever pondered the wording of the Act of Contrition, we pray in Confession, “I firmly resolve, with the help of your grace, to confess my sins, do penance, and amend my life. Amen.”

I have, time and time again, especially if I’ve just confessed the same laundry list of sins for the 100th time. I’ve even confessed THIS problem to the priest with a fiery statement, “I am NEVER going to commit that sin again! I do not want to have to confess it again!”

Of course, at the time, I meant it with all my soul (or so I hoped), and I further hoped that by stating it within the context of the Sacrament, it would be all the more true, and take on more weight in my own memory and intention to “amend my life. Amen!"

I recall, though, that when I stated those vehement words, the gentle rebuke of the priest who expressed hope that certainly I could do better in the future, to take care not to lose hope should I fall again…and again…and again. He reminded me that’s why we had the Sacrament of Confession; because we are weak and in need of God’s grace.

Recently, as part of my Lenten practices, I have been trying to spend more time in Lectio Divina and I am focusing, of course, on Our Lord’s Passion. Although I started with Luke 22:39 (Jesus’ Agony in the garden), in comparing that account with that of the other gospels, I also found myself meditating on the event previous to His Agony: Peter’s vehement, passionate declaration that even though others would fall away, he never would.


Then Jesus said to them, "You will all fall away because of me this night for it is written: I will strike the shepherd....


“Then Jesus said to them, “You will all fall away because of me this night, for it is written, ‘I will strike the shepherd and the sheep of the flock will be scattered. But after I am raised up I will go before you to Galilee. Peter declared to him, “Though they all fall away because of you, I will never fall away. Jesus said to him, “Truly, truly, I say to you this very night, before the cock crows, you will deny me three times.” Peter said to him, “Even if I must die with you I will not deny you.” And so said all the disciples.

Read the passage again, paying attention to the bold: Peter, in his zeal, in his deep love for Jesus, in his heart converted and dedicated to the Son of God, spoke truthfully when he claimed he would never fall away. The idea was absolutely repulsive to him, and clearly, his intent was absolute loyalty. Absolute faith. Absolute trust.

Jesus knew better, though, didn't He? He knew what Peter would do, and in revealing that Peter would deny him, Jesus was not chastizing, but spoke gently and with great love. He knew that this, too must be.

We know that Jesus' prediction came to pass, for indeed, Peter denied Jesus three times, stating that he did not know Him.

But Peter said, Man, I do not know what you are saying. And immediately while he was still speaking, a cock crowed. And the Lord turned and looked at Peter, and Peter remembered the word of the Lord, how he had said to him, “Before the cock crows today you will deny me three times.” And he went out and wept bitterly.

It had to happen this way; Peter had to learn the depth of his weakness.

So must we all.

When we go to Confession, or even in private prayer swear we will never committ a certain sin again, or if we are on fire for our Faith, vow that we will "never fall away, even if others do", we are forgetting who we are. Indeed, such zeal is laudable and even necessary, for we should all be so fired up with love for God!

Yet, as Jesus knows, fall we will, not once, not even just three times, but many.

I love the passage from Luke. Peter hears the cock crow just as he's stated his third, most adamant denial of Christ, and this sound brings him back to Himself. He looks up to see Jesus gazing at him, and recalls the words of Our Savior, and realizes...Jesus knew. And He still went to the Cross...for him.

Jesus didn't have to say anything; Peter was able to recognize the depths of his own weakness and in his grief, "he went out and wept bitterly."


Have we not done the same thing ourselves, in recognition of our weakness? In recognition that without His grace, we cannot overcome our sins?
We promise Him we will stand by Him, but eventually, we all fall and must get back up.

The other lesson I like to take from Peter's denials is this:  if Peter had not been following Jesus so closely, and trying to hard to live up to the promise he had made, to not fall away like the others, he would not have been in a position to deny Jesus.

In other words, Peter entered the battle. He braved the darkness, the hostility of the crowds, risking recognition even as he faltered. Yes, he fell, but had he not fallen, he would not have been able to recognize the depth of his own need, and he therefore would not have been so quick to respond when he sighted Jesus on the shore after His Resurection.

He knew Christ because he risked everything to follow Him, including failure! In fact, it was in his very darkest failure that he found such a deep encounter with Divine Mercy, culminating for Peter personally in his three confessions of love upon the the shore.

Each time we go to Confession, we should remember that we are entering into Love, and in so doing, by admitting our own faults, our sins, our moral failures, we are at the same time confessing a far greater love for God than for our sins. 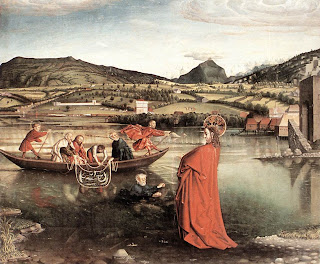