Every so often, people speak of their brushes with fame. 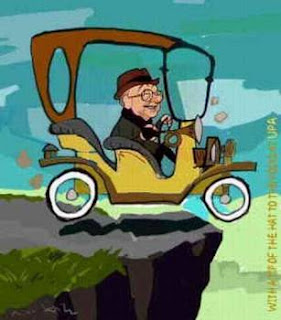 I've had a few of my own through various jobs or volunteer positions and thankfully, am not exactly disposed to being "star-struck". As it turns out, that's a good thing, but of course, that's not to say I haven't made a total idiot out of myself.

Then again...that kind of thing tends to be on the celeb-side of the aisle, if one pays attention to the paparazzi.

Several years ago I had a friend who, for a time, traveled in circles that brought her into contact with many celebrities, from athletes to movie stars. She recalled going out on a double date with a friend, and her part was being set up with an NFL player.  As she told me, "Decent guy...but...dumb as a box of rocks."

At another party, she told me, a friend pulled her aside and excitedly told her that Emilio Estevez wanted to meet her. My friend wasn't a fan, but she went out of regard for her hostess and respect for her friend and suffered the introduction.  "Nice to meet you" she said to Estevez...and walked away. Apparently he stared after her in complete shock as she left him standing. She wasn't into adoration of movie stars so returned to the friends with whom she'd arrived.

None of my encounters have been so entertaining.

When I was in college, I had to work security for a few shows:  the Freddy Jones Band, the BoDeans, and Cheap Trick.

I can tell you this:  the Freddy Jones Band was very cool and down to earth, as were their roadies.  The BoDeans were jerks who thought they have made it (and yet few know who they are outside of Chicago -both then and now) and their roadies were even worse.  (I had direct encounters with their roadies that I wish I could forget).

And....I met the lead singer of Cheap Trick before the show while he was looking for a restroom on a tour around the premises.

Some months or so after that, maybe a year, I was plainclothes security for Maya Angelou and although she didn't meet with fans or sign autographs, she invited her security backstage to thank us, so we all had the opportunity to greet her personally.

As I shook her hand and said something inane about the pleasure of hearing her speak, she looked at me, smiled and said, "Oh, how pretty you are!"


It seems, though, that my most interesting encounters aren't publishable.

When I was in EMT training I met a Blues celebrity in the ER, and we had a heyday chatting with him. Only a few weeks prior, I'd encountered the man in a local club with his band and really enjoyed his music. It was a joy, therefore to meet him in person and find him to be such an affable sort, albeit the circumstances were not so happy for him.  I remember wanting to go home and tell other friends (also fans) that I'd met him...and not being able to do so, because doing so would break confidentiality.

There's yet another, and this one, not so positive in the end:

Several years ago, while I was working in insurance, I had a customer who claimed to be a past-member of a famous band. At the time, I was unfamiliar with the group and because he was clearly a criminal, we passed him off as "full of it" anyway. As it was, even if he was a celebrity, past or present, it was clear he was lying to us and we wouldn't have handled his claim any differently.

In the end, we verified fraud and denied his claim, with many checks and balances in place. In fact, shortly before I left my position, I received a call from another insurance company checking on an NICB (National Insurance Crime Bureau)  hit, and told him to send me an immunity letter so that I could send him the file. Without that letter I couldn't say much but I did tell him to investigate the claim completely.

I can't say much about the investigation or the guy, but I recall him, in a deposition, telling us about his time with the band, and he's one I remember well, personally, because he was a funny guy, he matched the "character" he portrayed, and he reminded the co-worker who transcribed his initial recorded statement of a SNL sketch - an image that has never left my mind.

Today I heard a song by a band that sounded familiar, so I looked them up. As soon as I saw the name, I recalled my customer so did a little research.

And you know what?

By golly, he was telling the TRUTH in that case! My customer actually WAS a member of that group!

Dang it. He had talent...a real gift. He shoulda stuck with it.

We all make choices, don't we?

I've never had a brush with fame, but anyone who's met me can say they did. Hahahahahahha..... I kill me.