St. Catherine of Siena on the Priesthood 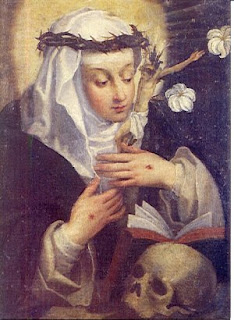 I'm not going to give you a bio of St. Catherine of Siena, because today, you can find that bio on almost every other blog, and they all link to the sources from which they are posting. There is no shortage of information on this dear Saint!
Last Ocbober, I read The Dialogue of St. Catherine of Siena for a class, and found this to be a life-changing book. It's one that needs to be read over and over again, much like St. Francis de Sales' Introduction to the Devout Life or Thomas a' Kempis' Imitation of Christ.   That said, it's not one I would recommend to someone not familiar with Catholic Doctrine, for while it is a mystical book, it is very doctrinal and manifests a theological depth that is astonishing, especially considering that the one who wrote it could not possibly have known any of these things.
For those who are not familiar with the book, it is what it claims to be: a dialogue.  In this case, it is a dialogue between God the Father and the Saint, and as such, there's no real systematic format.  She alternately praises God and poses questions, which the Father answers.  One question asked had to do with the dignity of priests; and in fact, there are a series of questions pertaining to the Priesthood. I will only cite this passage, in the hopes it will inspire you to take up this work and read it for yourself in its entirety:

I have told thee all this, dearest daughter, that thou mayest the better recognise the dignity to which I have called My ministers, so that thy grief at their miseries may be more intense.  If they themselves considered their own dignity they would not be in the darkness of mortal sin, or defile the face of their soul.  They would not only see their offences against Me, but also, that, if they gave their bodies to be burned, they would not repay the tremendous grace and favour which they have received, inasmuch as no greater dignity exists in this life.  They are My anointed ones, and I call them My Christs, because I have given them the office of administering Me to you, and have placed them like fragrant flowers in the mystical body of the holy Church.  The angel himself has no such dignity, for I have given it to those men whom I have chosen for My ministers, and whom I have appointed as earthly angels in this life.  In all souls I demand purity and charity, that they should love Me and their neighbour, helping him by the ministration of prayer, as I said to thee in another place. But far more do I demand purity in My ministers, and love towards Me, and towards their fellow-creatures, administering to them the Body and Blood of My only-begotten Son, with the fire of charity, and a hunger for the salvation of souls, for the glory and honour of My Name.
~  Dialogue,  p. 239-240
Posted by Adoro at Wednesday, April 29, 2009

I picked up this book somewhat early on in my teversion to the catholic Church- probably not wise. I did now manage to finish it. Now that some years have passed and I have relearned a good deal of the faith I am inspired to pick it up again.
Thanks for this. God Bless!

Please update to my new blog..