This is a serious topic, and one that should be discussed;  the fact is, head injuries can be deadly.
The big news today is about how actress Natasha Richardson died of a head injury received as a result of a ski crash on a beginner's slope. Initially she was fine, they tell us, but the other symptoms appeared.  And that's what happens. One minute someone is fine...the next...they're dead.
In my first year as a Ski Patroller, I remember that one of our fellow patrollers took a serious spill on the bunny hill. It was a freak thing; he was an amazing skier, he and his wife were actually moving to Europe and were going to be patrolling there, in the Alps. Well, he took a headlong crash and I remember being on scene...it was pretty obvious he'd hit hard.  And yet...it was a bunny hill.  Never underestimate the force of a fall, even when it doesn't seem to make sense.
I was also the patroller in charge of a scene on that very same bunny hill a couple years later,  where a little boy had taken quite a creative fall. And although over and over again, he said he hadn't hit his head at all...as it turned out, he DID have a head injury, although in his case it was a slight concussion.

Both of the above people recovered and went on with their lives, but witnessing the damage caused what what was later diagnosed as a "slight concussion" was quite daunting. In the first case, the patroller, "Bill" was bleeding all over the place as a result of a direct hit.  In the latter case, "Andy" had no outward sign of his injury, but he DID go downhill QUICK about 20 minutes later. 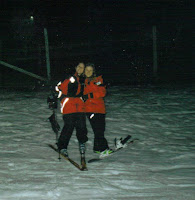 One of the scary things with head injuries is that although there are symptoms, they don't always match on every occasion. There are closed and open head injuries. There are direct hits, and hits that involve the brain being "rattled" even though the head has not taken a direct  strike.  There are immediate symptoms, and delayed symptoms.  And sometimes, the patient has to REPORT those symptoms because they can't otherwise be recognized.  (Actually, this would be the difference between Signs and Symptoms:  Signs are objective and can be outwardly recognized, such as an altered mental status, blown pupils, etc.,  Symptoms are subjective and must be reported, although sometimes can be guessed; i.e. someone who is drowsy can report being drowsy, but maybe it can be observed, too. But typically, symptoms MUST be reported due to their subjective nature.)

Thanks for this important reminder ...and as I tell my children; protect your noggin - you only get one of them.

I believe Dale Earnhardt's death in what was thought a minor accident at Daytona several years ago, was the impetus to mandate the Hahn head restraint devices for NASCAR drivers.

Corie Koskie, former Twin and Milwaukee Brewer 3rd baseman suffered a debilitating concussion on a routine play. He was out of baseball for a couple of years dealing with post-concussion syndrome. He is finally resuming his career with a chance to play with the Cubs this season.

Thanks for sharing this. I exeprienced two concussions, both with memory loss, as a child. In the first, I was six and hit my head after falling on a "Slip & Slide", and it was the memory loss that sent my mom outside to ask my friends what happened. She called my dad & they took me to the ER. The second concussion ocurred at school in gym class, and the teacher - a "suck it up and never cry" type - saw me land on my face and never asked how I was. It was a classmate who picked up on the signs (again, memory loss and confusion) and as it was a half-day, the school called my dad then sent me home, where as soon as my dad left for work I laid down and went to sleep. Hopefully this will inspire people to share their stories, and prevent similar tragedies in the future.

But what IS the proper treatment for a concussion? If you had not put a "brave face" on things, what would have been done differently?

On a trip home from college I hit my head on a television set (not wearing glasses at the time and misjudged the distance to the corner of the cabinet). It smarted really badly at the time but I thought nothing of it since I didn't black out or anything.

The next day I was walking to class and got very dizzy and nauseous so I went to the Student Health Service. There they did an X-ray and found I indeed had a slight concussion.

Since then I have always been wary of anyone in the family who has any kind of head trauma, no matter how slight.

Mike ~ Well, first it needs to be diagnosed so they can recommend the proper course, depending on the location of the injury, etc. In some cases the brain swells and they have to go through the skull to relieve the pressure. That's what happened to Ms. Richardson.

In less severe concussions, someone has to keep an eye on the injured person in case they go downhill. It can be hours or days, and the brain might continue to swell, so SOMEONE has to know what happened and what to watch for.

And of course....it would be highly recommended that the injured party NOT go skiing! lol

angelmeg ~ Wow, that would have been scary, too! What did they recommend you do in your case?

When my oldest son was playing high school hockey they had a game in Pa. which my husband and I did not drive to because we were tired. It was the only game one of us did not attend. During the game my son got checked into the boards and hit his head against the glass - a very common occurence during a game. He got up cleared the puck and went to the bench ( he remembers none of this). Because he knew his name and where he was, he played the rest of the game. When I went to pick him up when they got back and both his coaches came to tell me what happened and how groggy he was on the bus. Luckily they wouldn't let him fall aseep and I drove him straight to the ER. Scares me to think what might have happened had he taken another hard hit to the head during the game.

Try telling this to the adult, I don't need to wear a helmet to go cycling crowd. Twice a wearing a helmet made the difference for me and one of those times was said to have saved my life. That time was a very minor fall when cycling with out then very young children.

Perhaps some people aren't aware that the damage can surface weeks after the original injury. My brother has recovered (thank God!)from recent surgery for bleeding on the brain, which was hidden at first, then gradually got worse, leading to emergency surgery. This came about 2 months after he hit his head in a fall from a tree, where he had been trying to remove a branch with a chainsaw (bad idea!). He was very lucky.
I am so sorry for Natasha Richarson and her family.

Excellent post - full of good info. I was stunned by Natasha's death - it shows not only how much we have to follow through with medical attention, but how quickly and suddenly our life can end or be radically changed. I'm amazed at the training you have had - I'll bet one day your experience is going to all come together for you to put to use.

If an adult needs a helmet for biking, we all need a helmet for walking and standing under cabinets. I only got whacked on the head once from falling off a bike, whereas I've hit my head far more often in all sorts of other ways.

But since there's no point in letting kids play outside, making them dress in full armor is a good way of discouraging them from such pointless activities. Let them play videogames inside all day, instead. :)

Maureen ~ I've known several people who have been seriously injured biking. One was a co-worker who was out West dirtbiking (actual bikes, not motorized), hit a rock or something and went headlong into the ground. A helmet would have prevented a huge portion of her injury (she still probably would have had an injury of some sort, though.)

Several people are hit by cars while biking, whether their fault or the driver's. Helmets are proper and DO save lives.

When I was racing (skiing) I always wore a helmet, or if skiing in certain conditions, but they're recommended all the time and more and more I saw kids wearing them....by their own choice!

Of course, there are some parents who go so overboard with safety equipment...ahh...you've seen them too!