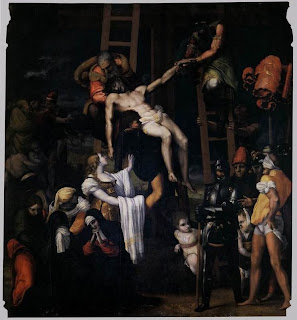 Earlier today I was pondering surrender.It seems, in some ways, to be such a lazy way of doing things. The idea of just...surrendering...isn't regarded as something positive, and certainly not a positive action! The act of surrender is, rather, considered to be a rather passive thing. To a certain point, I agree.  From the outside, it DOES seem like surrender has to do with passivity, for one is choosing not to do battle with someone considered to be an opponent. One is giving one's power and will over to another...and doesn't that make one passive in surrender?

Yet, I think we can look at it another way.

Surrender is, in fact, an action, and living in the mode of surrender is by necessity, active. In our fallen nature, we fight God. We battle everyone. We battle ourselves.  We're in such a hyper state of defensiveness all the time that in our hurry to do the next thing, we let the ax fall where it will, and often that means we sever our relationship with God as we cut our ties to Him through mortal sin. We are so rebellious we don't even know where obedience begins

So let's consider surrender first with the image of a child...pure surrender.

A child implicity trusts his parents.  He looks to his mother and father for everything, from comfort to food to relief of any sort. And even as he resists discpline, he doesn't really expect anything different, and learns to love his parents even MORE through their parental guidance, even if it involves punishment. That's how he learns boundaries that keep him from being hurt.

And if he breaks those boundaries, he trusts that he can run to his parents to comfort him and make his injury go away, make it stop hurting, and kiss the tears away until they stop.

Every act of surrender in a child is an action. It's not passive; it's an active response to love.

As adults, we are a little different, because we have full use of our intellect and will. Just as we actively choose disobedience, we must also actively choose obedience.

Surrender is simply obedience...coupled with absolute trust. It is believing in what we cannot see, but know to be true.  It is a response of love, to the ultimate sacrifical love of Christ.

Jesus HIMSELF surrenders to us. He makes Himself vulnerable to our abuse, our unworthiness, and even our sinfulness.  We punish Him severely when we receive Him in the state of grave sin. And yet...He has placed Himself into such a position to be so abused, so scourged...personally...by us, as individuals

He asks us, also to surrender to Him. Surrender our will (but not our intellect), surrender ourselves to his LOVE. Jesus will never abuse us. Jesus does not use us for evil purposes. He does not exploit us as we seek to exploite Him.

He simply loves us.  Yes, Jesus asks us to suffer with him; but no life is without suffering.  We are merely asked to offer our suffering on behalf of others.  Not on HIS behalf..but for those who do not know God, those who are in sin, those who are lost.

We so often worry about how to surrender to God, and worry that doing so is passive. Yet, when we are in God's own embrace, when we finally rest, and understand our dependence upon Him, we realize that we have to maket this choice. To simply rest, for us, is an action.  To decide to not "do" anything...is an action.  To TRUST....is an action.

All God asks us for is to surrender to Him. To let go of those things that keep us from a relationship with Him.  He will catch us...

All we have to do is let go.

We won't fall, but be raised up, to Him, our beloved Crucified Lord, who is lifted up and draws all men to Himself...including us.

This is a topic I have meditated on for years. I agree that surrender is not passive for us. At least in our initial stages of it, we must work at it! I love books such as "Heliotropium" or "Trustful Surrender to Divine Providence." They have taught me the vision of what surrender is.And yes, to simple rest is also for us an action. But once we are at rest withing His arms...then there is the "peace that surpasseth understanding."
Amanda
littlestepsalongtheway@blogspot.com

Very good post Adoro:
The hard part is in this confusing world, with so many mixed messages, it's hard to discern if it's God, myself, or the world talking.

I suppose we should pray, then, to let us not fall into listening to--the world the flesh and the devil, but for God to help us distingish His Will for our lives, and then ask Him to give us the Grace to receive His Will, and to receive it well!