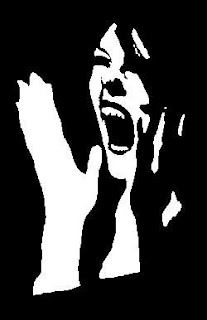 I still remember the hot summer afternoon in Alexandria, Minnesota back in 1995. My Mom had called on a Saturday afternoon, and after an extremely frustrating conversation, the content of which I can't even remember, I hung up the phone and screamed, "Aaaaarrrrrgggh!"

My roommate looked up from whatever work she was doing at the time, and glancing at my expression of consternation, commented, "I don't know a SINGLE WOMAN who doesn't do THAT every time they talk to their mothers!"

It was nice to know I wasn't alone.

But instead of screaming, I just sigh. I sit through conversations with my earthly mother while gazing at an image of our Blessed Mother and I take deep breaths and try to work on the virtue of patience.

And I know that so many of us have the SAME conversations with our mothers. I could probably talk to YOUR mother and the content would be the same.

First, Mom tells me that she's been to the Fair, and gives me the full menu of what she's eaten throughout the day, any interactions with various medications, and how the food, if it didn't interact with medications, how she did or didn't approve of it and why. And how many days she's going to suffer for having eaten it in the first place. (I will get this same info and the FULL report, probably on Tuesday this week.)

Then I get the run-down on how she overextended herself because she's only used to a 30-minute walk that the doctor says she has to take each day, but today it was 2 hours so she's got to write that in her journal and report it to him.

And then she discusses her difficult work schedule of 20 hours per week, which fluctuates by about an hour or so a couple of those days, and how HARD that is to go into work at 10 instead of 9, an get off at 2 instead of 1.

But that's not all!

In the past, Mom was contented, after her menu of the last few weeks (even though I'd already gotten the full review a few times), to give me a full report on her health with all the gorey details.

But now...Mom has a friend. So, after Mom's report, I get her friend's report, too. And all the details and Mom's diagnosis and full advice given to the woman. Along with her menu, too. Seriously..I got to hear alll about how the woman likes to eat radishes before she goes to Mass on Saturday, and how the radishes made her smell like onions during Mass (don't ask, you don't want to know), and Mom's "fraternal correction" of the incident. I also now know all about her friend's sleeping schedule, her Insomnia, and her addiction to caffeine and no-doz, and I think I have here a list of her medications in case of an emergency. Because God knows the medics would call the daughter of a neighbor if the woman in question had a medical emergency.

Nope, I don't scream anymore when I hang up the phone after talking to Mom. I just sigh and try to forget everything I've just heard, because I simply don't want to know that much about her neighbors. It just doesn't seem right. In fact, there's stuff I don't want to know about Mom's personal life, either, and I wish I didn't.

YOU know what I mean.

AND STOP LAUGHING! Even though it's true, it's not funny!

Why is it that when our parents get older, we find we need actual recovery times and even debriefing from the trauma of talking to them?

Please don't get me wrong. I love my mother. She is and always was an incredible woman, and may even be a living Saint. Like all mothers and daughters, we have had our difficulties, exacerbated by Mom's bipolar through my teenage years, and my having to be an adult at too young an age as a result. So there are struggles there that don't belong to a normal mother-daughter relationship. Yet there are moments that match EXACTLY what other women I know deal with, and tonight's conversation with Mom was just such a moment.

And as much as these conversations drive me crazy, I think a part of me will always cherish them, for I don't think Mom is long for this world. We nearly lost her last December, and I think it's just a matter of time. She looks old beyond her years, thanks to her illness, her resulting medical conditions...and the medications that have given her the ability to live on her own in a relatively normal, if isolated, life.

God bless her. If that woman can raise a child like me, well...she deserves better than me. She deserves Sainthood.

Please keep my Mom and our family in your prayers.
*
Posted by Adoro at Saturday, August 16, 2008

Be happy you CAN talk to your Mother-as challenging as it can be. Yes, I know.

I think we all have these days/weeks/months/years with our moms. You're not alone. Looking back, I think they just want to share everything with us...some of it inane, but it is important to them.

Then there are times when the 4th Commandment gets really tough... and prayers were needed to change me so I could understand her.

I can't say these moments have all disappeared, but I can say that I understand her more now than I did then. And I have learned to cherish some of these moments (later).

Your family remains in my prayers.

"Why is it that when our parents get older, we find we need actual recovery times and even debriefing from the trauma of talking to them?"

Some of us not 'older' people need that too from the trauma of talking to our parents. Granted, some of our parents need recovery time too. :P

HA! My mom has her own "issues" but it sounds pretty much like you feel my pain. I could gouge my eyes out sometimes. I love her and she does so much for me but sometimes, I do that screaming thing after hanging up with her.

I can just hold the phone away from my head for almost the whole conversation and go "uh huh" once in a while and she never would know the difference. She doesn't LISTEN but she expects that I do, and that I care about the dumbest stuff.

I love her, I really do. I also expect that my daughters will do the same thing when I call to bug them about crap they could care less about.