The August 2008 Siege of Orissa

All the "rage" locally is with regard to the coming political convention. And yes, it's important, it's an election year. And the local "anarchists" are being arrested and there's a great deal of outrage about it, claiming the police are abusing their civil rights.
But has anyone been reading Catholic news? Why hasn't the media been covering the horrible-beyond-words violence in Orissa, where the Hindu extremists are running about gang-raping nuns in public, burning young women and priests alive, and torching everything they run across that happens to be Christian.
All this while their police look on and do nothing to stop it. Quite literally, the police stood and watched while "groups of Hindu extremists" gang-raped a nun. I have been reading Catholic and Christian news services, but their articles are rarely, if ever, carried in secular venues. And I've been horrified beyond horror at what's been happening...and the resounding silence of TV has made it even worse.
Thanks to Terry at Abbey-Roads2, I have found a new blog to watch, Orissa Burning. Get the REAL info, the stuff the media won't bother to cover. Why should they? It's not happening here in the US, and of course, it's not as if this country isn't made up of people from other nations, some of whom are Indian. So it's not as if this kind of violence affects US! Oh, no!

WHY ISN'T THIS VIOLENCE BEING SHOWN THROUGH THE SECULAR MEDIA??!
You and I know darned well that if it were Christians doing these things, the media would be ALL OVER IT! But NO! Because it's Hindus. They must be a protected class...they can do what they want, burn people alive, destroy orphanages, and rape nuns, but apparently this isn't newsworthy.
We have a couple of Sisters from India at my parish, and this morning at Mass, considering the violence in India, I began crying, trying to understand why God allows this. Yes, I know the theology, but I can't figure out how He could allow His Brides to be so violated by so many men, so violently. I can understand why He allows violent persecution...the same thing happened to early Christianity, and has continued to happen throughout history. Christians were brutally murdered, and we know that the blood of the martyrs were the seeds of the Church. And we know that in places where our Faith is so violently persecuted, it also grows very strong. 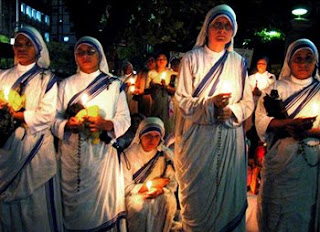 But GANG RAPE? I can't imagine anything worse. I'd rather be burned alive, flayed alive...anything but THAT! Do you see what a horrible violence that is? It's not just invading one's most intimate and private parts...it damages the soul. Women who have experienced rape experience a trauma unlike that of any other. It's not being beaten, or a broken bone, or even cancer. It's rape. It's the closest thing to Hell on this earth. There is NOTHING more awful. There aren't words in ANY language to describe the horrors of rape.

And for this unspeakable crime to be suffered by the most innocent of people....I have only tears, for words can't convey the depth of suffering. Words are trite.
And in Orissa, it's even worse and "just rape"...for those who are supposed to be there to protect them are standing there in their badges and looking on, unconcerned at the physical, sexual, and spiritual violence being done before their very eyes. One article speaks about how a priest, apprehended by the mob, was ordered to "have sex with" the Sister, because they claimed, "priests and nuns do it!"
It seems he continued to refuse and continued to be beaten even more in lieu of visiting this deepest and most atrocious violence upon someone who was likely a friend. How awful for them both, how he must have been trying to avert his eyes, how she must have stood there, probably naked or nearly so, covered in slime, violated, humiliated to her very soul...
And we hear very little, if anything, about it in the secular media.
If this was happening in the US, if even for an hour, it would be all over the international media outlets. It would be quashed.
But because it's India, it's apparently unimportant.
The truly sad thing is...this kind of violence is happening in other countries as well, perhaps more quietly. But we don't hear a lot about the Sudan, either, and this kind of violence has continued to happen there for YEARS.
Please pray for our brothers and sisters in India, and throughout the world. This HAS to end!
As we go about our daily lives here in the U.S., we practice our faith, we celebrate Labor Day, we sport images of our faith on our cars, on the windows of our homes, on the jewelry we wear, and in the words we proclaim. And we are safe. And although I am a woman living alone, I can't say I particularly fear that a gang of extremists will happen upon me and attack me. As I write, my home is wide open to admit the breeze...and I am not afraid.
I have done nothing to merit this safety. My sisters are being violated, and even though by our country's standards I consider myself to be poor, I have more than I need, including an expectation of safety. A presumption of safety.
They don't have that in Orissa. They are fleeing to the jungles, they are hiding out, they are suffering in ways we can't imagine...and as a country, as Catholics...we're ignoring them.
In India, such transparency that we enjoy in our practice of Christianity isn't just a physical death sentence...for women, it places us in a position to be gang-raped by violent extremists.
I thank God I'm in America...and I pray to God that those women who have given their lives to Him, and the violence done to them converts the very mobs that have done so much to destroy them, body and soul.

Thank you for this painfully honest report. I had read the reports and wondered the same thing; until I remembered political correctness.
Catholics: bad
Any other religion: perfect.
Thus no coverage of any real event that contradicts this.
Take comfort in the expression that the blood of the martyrs is the seed of the Church.This incredibly brave witness may lead to great wave of conversions. I read that Blessed Mother Teresa predicted that her nuns would suffer persecution. A glorious crown is now worn by that sister in Heaven.

I am horrified by the photo shown, and the information you conveyed. What is happening is so beyond comprehension, that my very heart hurts. As a woman myself, you are spot on in saying that being raped and violated in that way is a fate worse than death. I would rather die at the hands of a gang, than be raped by them. God save us!

I'm so happy you found this story just as compelling as I did, and that yu found the blog Orissa Burning. GREAT post Adoro!

Why isn't this the #1 story on every news show?

Because they are Catholic nuns.

If they were any other racial or ethic minority or religious denomination this story would be making much more noise in the press.

It would have been so for Oscar Romero and the others in El Salvador had not he been so well known before he was assasinated.

The main culprits financing these terrorists are Hindus in USA. They send money to these organizations. The hate based group like VHP has shakas USA. Hindus play race card in USA but happily side with these fanatics.

Dear Adoro, have you seen this letter from a nun who was raped 13 years ago in the war in Yugoslavia?
http://www.catholic.org/national/national_story.php?id=28882

I feel just the way you do about rape, and I can hardly stand to think about it. But that letter was consoling. Even though she's in anguish, she places all her trust in God. It is truly miraculous and helped me to have faith too.